I submitted my reimbursement request on June 5th and I was told that It may take 8 weeks. Now it is almost 15 weeks but I have not received anything. Last week, I visited their website to check the status and found out the status as processing error.It also gave me an option to click to "Start where I left off" and when clicked, it gave me a message that someone will call my cell phone number soon. I have not received any calls, I have been clicking on the button almost everyday since last week but still have not got a call. I call their number 1-888-390-6867 on Switch2tmobile.com and nobody picked up after being on the phone for over an hour. I called the customer service from my phone using 611 and the person did all kind of research for a long time and then transferred me to the rebate center where nobody picked up my phone after listening to the music for an hour. So, here I am trying to get an answer. I switched my line from Verizon and I already made the payment to Verizon for their phone. If I had known I would never switched the phone from Verizon. I have been a customer with T-Mobile for a long time and this is what I get for being a valued customer.

Below is the message I get when I click on the option and I am still waiting for a phone call to help me with it: 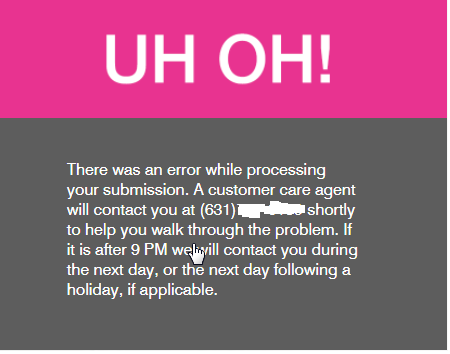 Hi, ​, and thank you for taking the time to post about this issue! 15 weeks is definitely much longer than we envision for Carrier Freedom reimbursement, let alone review! It sounds like you've put forth quite a bit of effort trying to get to the bottom of this -- when you spoke with us and we researched your submission, were we able to provide you with any information before transferring you to the Carrier Freedom team? I understand that this pop-up clearly states that you'll be getting a call from us, and I am so sorry you're still waiting for that contact. When you dialed the Carrier Freedom team directly, do you recall which prompts you followed to attempt to get to an agent?
We definitely want to see what we can do to help out here, and collect a little more detailed feedback from you if you don't mind. I'm going to send a private message your way, which you can review in your inbox in just a few moments. Thank you so much!

Terrible Service and False advertising from T Mobile.  I have not been able to obtain my $151.88 payoff amount for my old phone.  When I call customer service they give me telephone numbers for the reimbursement card area.  Guess what!  No one answers the phone at the numbers given.  Total false advertising and a scam!

Ouch, ​, that's no good! Can I ask what number(s) you're dialing? Are you referring to a toll free number and prompts to get to an agent?
We'd like to collect more examples of these calls, so I'm going to send a PM your way as well -- please take a peek at your inbox when you have a moment. Thank you so much!

You guys know what numbers are used for your reimbursement area.  You

are simply playing games so that people can't collect the reimbursement

for their old phone.  False advertising!

​, I can tell you're frustrated, and I promise you I'm not asking with any intention of playing games. I wanted to double check the number you used as your post confused me a little -- you mentioned numbers plural, but we have one number for the reimbursement team, so I'm concerned that we may have provided you with an incorrect number. There are also four separate prompts that must be entered to reach an agent, so I wanted to make sure we'd provided the correct information in that regard as well.
The Carrier Freedom team's hours are 5 AM - 12:30 AM PT, and their toll free number is listed on the switch site, and mentioned in the original post here -- it's 1-888-390-6867. To reach an agent, you'd select your language after the initial prompt, then press three, then one, then one through the remaining prompts.

If this is what you've been dialing and you're having trouble getting through, we definitely would appreciate any details you can provide so that we can forward specifics along with the feedback, because right now we don't have any notice that their wait time should be significant. I've sent a PM your way with the request -- since this is a public user forum, we'd prefer not to have your phone number posted on the thread! Thanks.

I called 1-888-380-6867 on Sept 21 and was on hold for 12 mins before I hung up. On Sept 25, I called 611 from my phone and they transferred me to Rebate Center where I spent about 31 mins. When I check the status from Switch2tmobile.com, it says processing error and gives me link to complete the process but when I click on the link, it says that someone will call my cell to walk me through to complete the process. I have tried for many days but no phone calls. The website also gives an option to setup a call back on a certain date and time range. I have setup the call back 2 or 3 times but never got a call back. It is frustrating.I have paid Verizon over $500 for their iPhone to avoid collection and credit report entry. I hope you can help me to get this resolved.

Thanks for that detail, ​. Please reply to the private message I sent you as soon as you're able. If you log into the Support site you can click this link to access it: inbox.

Switched to T-Mobile in December.  Part of the switch was $100 MC gift card for each line.  Two lines switched from Verizon.  Have not seen cards.  Called customer service and they stated that the promotion was denied due to a computer error.  Wow???  Stated that the program is no longer being offered therefore they cannot send the gift cards.  Another WOW!!!  Started to search online regarding this issue and found the “denied” is common.  Waiting for a supervisor to call me back.  I would hate to think this is a scam from such a large company - sort of the bait and switch.

OK. I. getting a bit worried after reading all this. I as well switched from AT&T and was told that the 2 phones being brought in would get 200.00 each on a Visa card I brought in 5 lines bought 3 new phones and brought 2 suppose to get 400.00 cause they only allow 2 lines for the promotion, was to get a iPad and 2 watches one for me one for my husband they were out of stock for the man's one Sai c I would have to wait for both at same time, nothing was said about the iPad. other issue I even called back trying to hook up my landline with them and I've been hung up on no call back so I waited called them back all to spend hours on the phone the rep said there wS so.e sort of error billing error on them wanting to charge me a different rate and he assured me he would call me back Sunday July 10th and never got the call after he put his reputation on it, I guess his reputation doesn't matter to him for he did not call me back, so I'm unsure if I'm still with Comcast or t-mobile. it appears to be one lie after another, I run a business here and if I treated my customers this way I would be out of business. I'm within my time frame of canceling everything with T-mobile and hooking up with Verizon least I've heard they are legit. I have not been a customer long but you already leave a bad taste in my mouth, NOT VERY sure I made the right switch. if it sounds to good to be true chances are it is too good to be true and I will cancel all 5 lines, and the internet if need be.

The whole switch program is to get you to leave your phone provider and they will sort out the lies they tell you later!! Months later

Yes I have noticed. But that's OK I will cancel everything on the note that they did not comply with the agreement that they gave when I signed up. I will not deal with liars and I surely will not do business with one. I'm giving them just a few more days I have done everything right on my end it's them who will not comply. They are already fraudulent  on many things that I agreed to. But not sending me the 400.00 for signing up has broken the deal in my eyes.

phone number with an unclear offer …. I presume that’s those short text messages are scams.

I always delete those scams. I will only open such a messagfe when it is a clear offer from T-Mobile

and never from other calls !!!!

They at it again.

Recently switched to T-mobile. 7 total lines. 3 Eligible for switch2 program. All denied. I have contacted an attorney, this looks like CLASS ACTION lawsuit. I’ve also submitted request for investigation to our state Congress. It’s been 2-3 months, hours wasted online and attempts to talk to someone.