I’m very confused about the international rates when making a WiFi call to a number overseas on a T-Mobile One plan. According to the support page, which I have read a thousand times, wifi calls are billed at 0.20$ per minute to most countries.

But I’ve been now billed over $200 (over 3.00$ per minute) for one call to a Netherlands mobile and a second call to a Switzerland landline. How is this possible?

If the policy on the website is incorrect, it should be fixed. I would also ask to be reimbursed for these two calls as the policy was misleading (I would have called from another phone had I not already read the policy and been assured the rate would be 0.20$ per minute.

text and link below: l

How do I get this resolved? The customer care people I’ve spoken to can’t figure out what I’m talking about.

A $200 charge on my bill would definitely be shocking! Wi-Fi calling is a great way to stay connected when you are in an area without T-Mobile coverage or the coverage is not strong enough and it also provides some benefits when roaming internationally. When in the U.S. Wi-Fi calls placed to other countries are subject to international long distance rates, based on your account/features you have.

You can see our international rates for any country you want to call here. Calling Abroad | Stateside International Services | T-Mobile​. If you opt to add our stateside international feature to your account, you can get discounted rates or even unlimited calling to landlines and mobile numbers in other countries.

For more information on WiFi calling and WiFi calling billing, you can check out our Wi-Fi Calling from T-Mobile support document for all the details.

A $200 charge on my bill would definitely be shocking! Wi-Fi calling is a great way to stay connected when you are in an area without T-Mobile coverage or the coverage is not strong enough and it also provides some benefits when roaming internationally. When in the U.S. Wi-Fi calls placed to other countries are subject to international long distance rates, based on your account/features you have.

You can see our international rates for any country you want to call here. Calling Abroad | Stateside International Services | T-Mobile​. If you opt to add our stateside international feature to your account, you can get discounted rates or even unlimited calling to landlines and mobile numbers in other countries.

For more information on WiFi calling and WiFi calling billing, you can check out our Wi-Fi Calling from T-Mobile support document for all the details.

I was expecting 0.20$ per minute in this case but was charged $3.00 per minute. When I contacted customer care they told me that I am not eligible for this rate as I am on a TMobile One plan, but as you see, the page explicitly states that this is the rate specifically for a “TMobile One or Simple Choice rate plan”.

so you see why I’m confused? 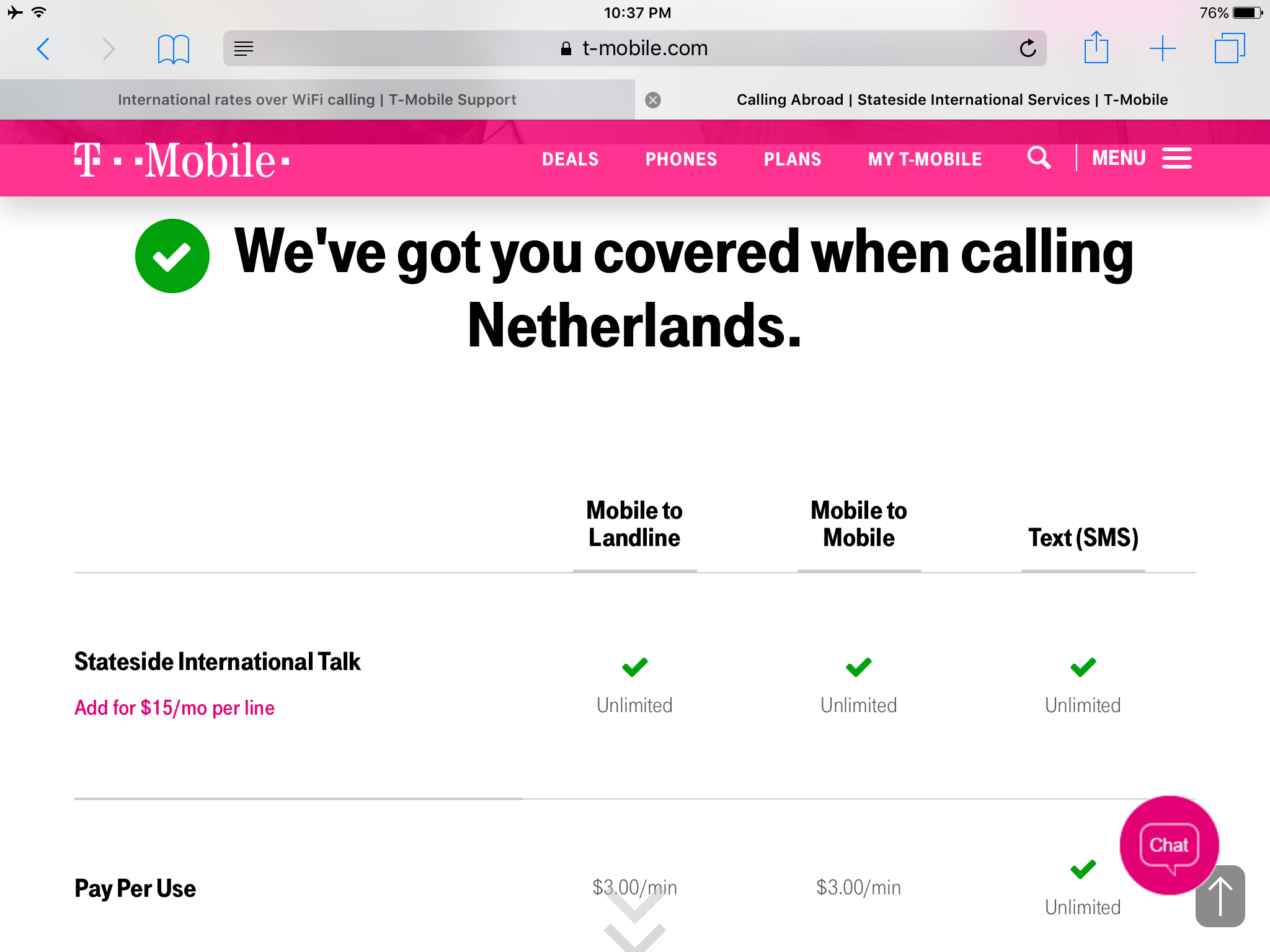 WHILE YOU ARE IN ANOTHER COUNTRY

.20 cents per minute is the rate you will be charged if you are in another country making or receiving calls from or to the United States.

WHILE YOU ARE IN THE UNITED STATES, CANADA, and/or MEXICO making calls to the Netherlands you will be charged $3 per minute for ALL CALLS (LandLine & Mobile) unless you add the Stateside International Calling feature to your current plan... then all of your calls would be unlimited and at no charge to you.

I have the (grandfathered) Stateside International Calling feature... and it saves me so much money every month....

Use Whasapp, it is an app at the play store.  It works great in Europe.  Calls are free.

I can definitely see where the confusion happened. is correct though and the Stateside international calling feature is needed to have the unlimited calls to an eligible country while in the United States.

Im not a Fan of Facebook.... and they are the current owners of Whatsapp...  i wouldn't feel comfortable with Facebook having my personal information including who I call and when... im sure that information is being sold or used by someone despite whatever privacy policies they display...  ie. Election rigging 😜

Then I hope you don't use Google if you are afraid of Facebook.  Google gathers much larger amount of data than Facebook does.  Even if you opt out Google still collects a huge amount for example. Google admits it tracked user location data even when the setting was turned off - The Verge

Honestly...  Anything free on the internet has some sort of data tracking.

You are correct.... i read the shenanigans of Google from another source years befor that Verge article..... I don't like them either 😈 .  When I talk about private matters I always take the battery out of my phone... becuse I'm always concerned about my privacy being invaded and recorded. 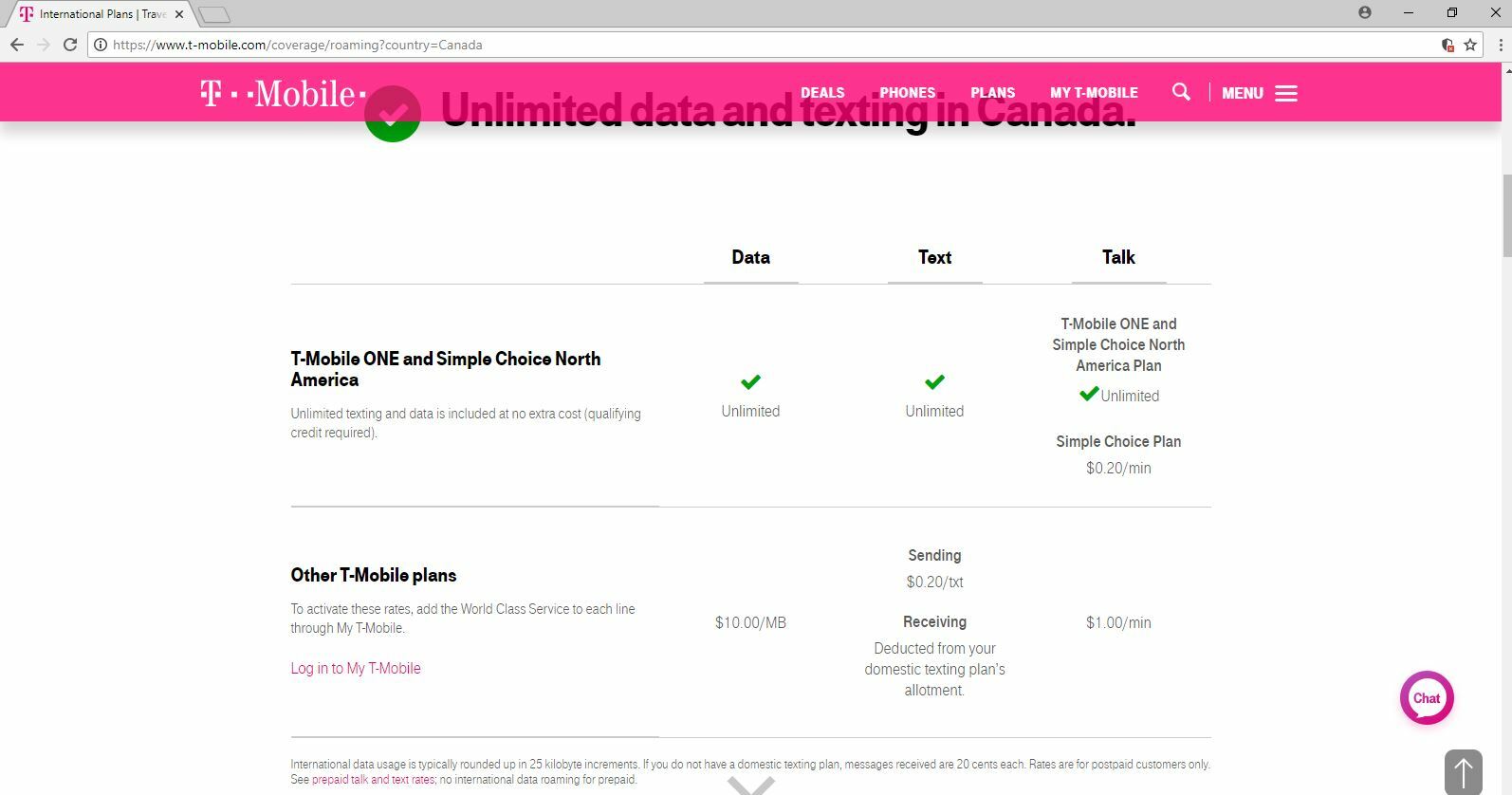 Can someone explain this in the talk column?

Hey
What specific questions did you have about this? I noticed you were looking at the rates for Canada. Did you wanna know what the Wi-Fi calling rates are while in Canada?

I'm still a bit unclear about WIFI calling while traveling abroad. I have T-Mobile One plan, and will be in Turkey entire  month of August. During this time, while in Turkey, I plan to connect to WIFI when making calls to the US landline, 1-800, and mobile numbers. Some of these calls are work-related conference calls, I'm guessing a total of 9-10 hours of talk will happen in 30 days. I called T-Mobile, and was told that these calls will be free as long as I'm connected to WIFI, but now after reading this post, I'm confused. Are these calls will be free for real?  if not, what the Wi-Fi calling rates are while in Turkey?

Calls made back to the US over wifi are free.  An extra tip is to turn your phone to airplane mode THEN turn on Wifi, thus ensuring that you are only using wifi and no chance of using the cellular signal which would charge you the $0.20 / minute.

Thank you so much magenta2685614 or clarifying!

I recently switched to TMobile (family plan) and got a text message that one of the family plan member accumulated $78 of international calls. I called that member and she's not aware of making any phone calls.  However she received phone calls from the Philippines (the family member in Philippines initiated the Phonecall is using a Phone card).

The one thing i don't understand is that the duration of the long distance call should have been paid (pre-paid) thru phone card.  The fact that she only receive phone calls, why she's billed $3 per minute?  This is a scam.

Very perplexing, as you aren't billed for incoming calls unless they are accepted collect (which shows as a specific type of charge on your bill).  Did you check the detailed bill to verify that there were no outgoing calls made? Please note that if there were calls made with WiFi calling, you will still be billed international rates.

I just reviewed the usage of the family plan member and the international calls listed on the account usage are ALL incoming and "Wifi-call".

And you see the specific charges listed next to the incoming calls? I'd be curious to see that. Basically, you are not supposed to be charged for incoming calls unless they were accepted collect.  Your best bet would be to reach out to Care and have them go over the bill with you so that any unwarranted charges can be adjusted.

When you're using wi-fi calling, don't you notice that there'll be a pop-up warning before you make wi-fi calls that it may be subjected to carrier's charges/ rates? This is because when you're travelling internationally, you're borrowing other countries' carrier towers & when you get connected to that borrowed tower, it'll not discern if you're making a regular phone call & that's the main reason why most uneducated customers still gets charged even while using wi-fi calling. To resolve this, make sure TO PUT YOUR PHONE IN AIRPLANE MODE BEFORE SWITCHING ON WI-FI. By putting your phone in airplane mode, that means you're disconnected from the carrier's towers & your sole connection will be just wi-fi. If you're doing this right, then you should not get charged of roaming charges internationally. 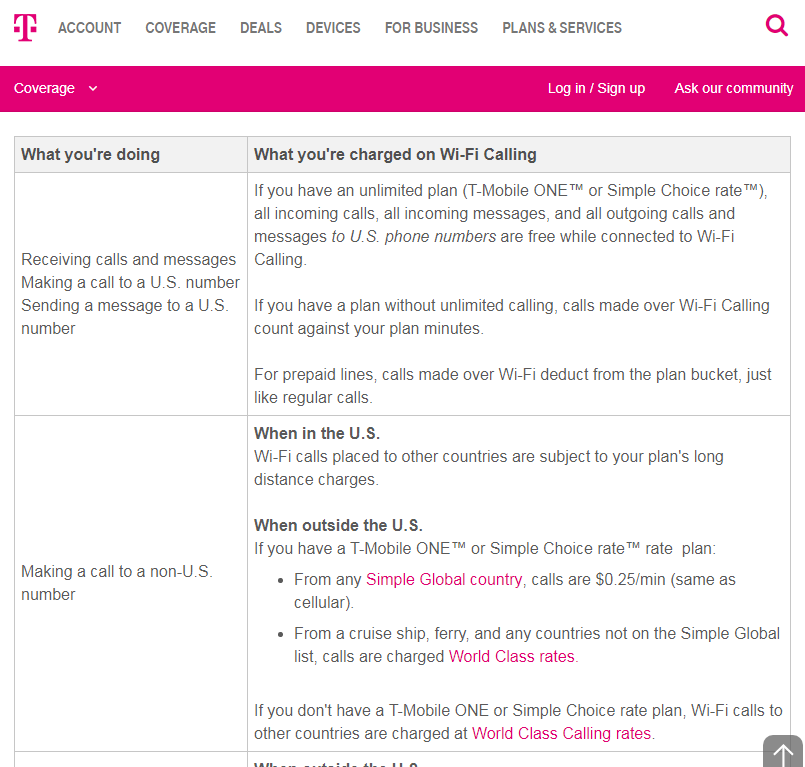 Hi, I would argue the TMO Chart is confusing because it doesn't speak to WiFi calling back to USA. I just talked to a TMO customer service rep and he told me I would be charged for WiFi calls at the regular roaming rate. I have always understood when calling the home market, in my case the USA, while on WiFi would eliminate a roaming charge.

The chart on TMO's web site (in this thread) doesn't indicate if what you are charged when you make or receive calls BACK to the USA--it specifically states "When outside the US ... you'll be charged Simple Global country."

I think TMO should add a When outside of US section to the "Receiving calls and messages Making a call to a US number" to clarify what happens with WiFi calls when calling back to the USA. It would avoid confusion that even your telephone representatives are experiencing.

I'm still a bit unclear about Wi-Fi calling while traveling abroad. I have T-Mobile One plan, and I’m in Latvia entire for two months. During this time, while in Latvia, I’m connected to Wi-Fi when making calls to the US landline, 1-800, and mobile numbers. Calls are work-related mainly conference calls. I was told that these calls will be free as long as I'm connected to Wi-Fi, but now after first couple of days I have received a text from T-Mobile that I have already 2 hours of international calls, I'm confused. How come the text says that I have 2hours of international calls if I have been using Wi-Fi calling? Also, now I’m confused about what will be my international rate (charge) and what is the Wi-Fi calling rate while in Latvia? Can I see somewhere what is my bill so far for this month based on these international calls?