I was with Sprint for 20 years and swtich over to AT&T 2 month ago and then I switched to T-Mobile this week Dec 22, 2019. I have been trying to get my Visual voicemail to work with my email "Send to Email" and every time I click on the swtich I am greeted with this alert "Visual Voicemail We are unable to update your settings at this time. Please make sure you have a data connection and try again. If the issue persists please visit my.t-mobile.com/ visual voicemail."

This is happening with two of our Samsung S8 plus phones, please let me know what to do to get this issue solve. 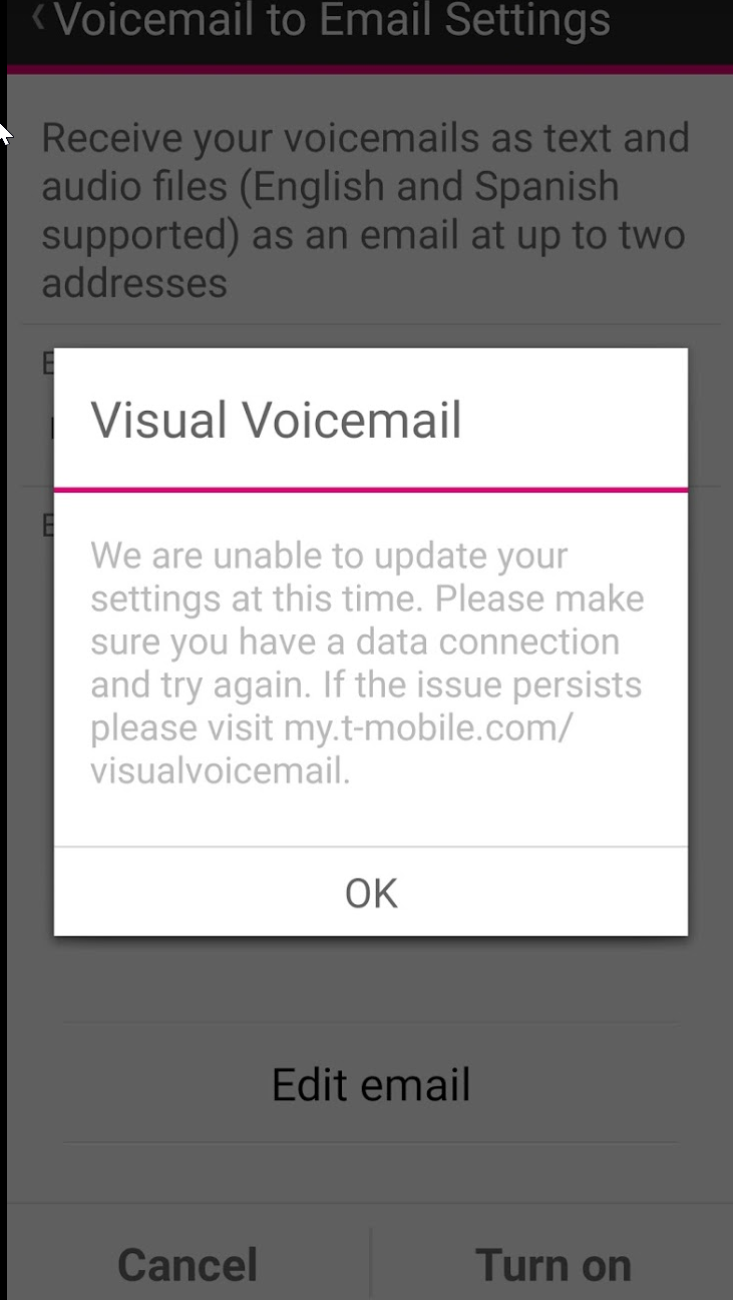 I am still unable to get this feature to work and Ive been PAYING for it. I am going to require T-Mobile to refund the entirety of the charges I have paid thus far. Come on T-Mobile. Voice mail should not be this difficult.

This works on the Galaxy S8 running android pie. This will show two visual voicemail. One will be grayed out. The second one will be the one you have to turn off the feature in the instructions.

Dear TMobile ​ ​ ​ ​ ​ ​ ​ ​ How long are you going to ignore not only this thread but the issues with the Voicemail app? I'm on an HTC U11 and the VVM keeps saying it's having syncing issues, which I know is sucking the battery life. The constant notifications need to stop. Please get with your development team and resolve this. It should not take 8+ months to address this. ​ ​ ​ ​ ​

All but one of my devices are unlocked.  The one T-Mobile device is the OnePlus 6T and has native VVM.  So whatever they're doing doesn't make sense to me and yes, terrible business practice.

A lot of people buy OEM unlocked devices to help avoid carriers bloatware and for some features that comes with those devices. So when a carrier decides to force people/customers to use something that they didn't have to use before; I consider that a bad business practice.

Couldn't agree more.  The native VVM is/was perfect, simple yet effective.  Native VVM still works on my Pixel 3 and OnePlus 6T, but doesn't work on several of our other devices.  Maybe if the T-Mobile VVM app didn't look like it was from the Android 2.1 days, it wouldn't be half bad. For me though, nothing beats the native one.

Exactly.  Everything was perfect until TMO forced their VVM down my throat and now it's all broken.  Ridiculous.  Support on the phone has no idea what's going on, they say yeah, we've heard of this and our people are working on it.  It's been YEARS....

I had a problem with the t-mobile app like that. The only thing that resolved it was a factory reset of my phone. I keto back ups of my phone, you should check to make sure you have one, and do any updates after resetting the phone and before doing the restore.

Oh my...I wanted to have so much hope with that battery saver exercise melechi.  However, on my Nexus 6, the Visual Voicemail app wont' even load.  A thousand times I've hit "retry now" and consistently receive "We are experiencing some issues with activation.  We will retry in a few minutes."  Same thing...every time...for months. Kinda crazy!

TMO as a whole are not telling a consistent story or giving any sort of solution to the problem.  Some Pixel devices work some don't.  People in the forums here have mentioned that newer OnePlus devices are working with native VVM.  What I have noticed is if you receive a message to download the new T-Mobile VVM app you are not going to be getting native VVM on your device no matter what T-Mobile hoops you jump through.  What worked for me was switching carriers.

Hello all, this may not be the solution for everyone, but I has a thought while reading some of the comments. With the new release of android, battery saver was updated. So I turned it off, gave myself a call and left a voicemail. It showed up with visual voicemail immediately.

Im a tech consultant, so I know that won't help everyone with this problem, but at least some of us can benefit.

If you need to use battery saver. (This may be different on some phones)

Open settings.  Choose the magnifying glass to search. Type battery. Select optimize battery usage. Select that option again if you aren't in it. Change the sort to "all" scroll down to visual voicemail and turn off the optimization.

I find it amazing that this feature that worked perfectly through the native app dialer no longer works but, when I reset up my Motorola Nexus 6, it works PERFECTLY and TMO told me that this feature is only available for the Google Pixel devices.

My problem is that the Visual Voicemail app won't load.  So I'm in a state of limbo in-between the original platform that worked great, and an app I have to have installed, but won't load on my phone.  Without the app loaded, I can't even see the garbage can icon you refer to.

Exactly.  Just yesterday I FINALLY received 2 business messages, but "Visual Voicemail" in it's wisdom wouldn't allow me to "load" either message.  Outrageous.  How I wish I had completely ignored that message telling me to "update my Visual Voicemail".  I had the original platform and it worked GREAT.  Visual Voicemail is crap.  Shame on TMobile for allowing the app developers to roll out this broken mess.

Well - this post is over a year past the OP - this app is still 100% unreliable and causes me constant embarrassment because I never receive my business voice mail.

I installed Tmobile Visual voicemail app Version 5.29.3.81726-MR on Samsung Galaxy 8 and never could delete an individual inbox voicemail message.  There is a garbage can icon on the main page of Visual voicemail where you see all the voicemails that you can scroll up/down throughout each voicemail message.  The "Inbox" is on top left and to the left of this is a garbage can (delete) icon, a play icon and 3dot horizontal icon.  I was able to click on this garbage can (delete) icon, then "check mark" on every voicemail message I wanted to delete as a group, then "click" delete at bottom of screen with success.  I am able to delete each voicemail individually on my Samsung galaxy note edge Visual Voicemail app Version 5.27.9.81528-MR.  Hopes this info helps everyone.

How do you turn off the optimization for visual voicemail app?  i don't see that option anywhere.

Remove ny e-mail from your data base. I do not desire receiving Fake/Fraudulent emails.

I turned off the optimization for visual voicemail app and now it's working. Thank you again.

I have a Samsung S9 and same problem for about last month.  Visual Voicemail was working fine and then just stopped synchonizing.  Called Tech Support and they got it to work - for a few hours - then back again.

Appalling this seems to have gone on so long for so many customers.  Better get this fix rolled out asap.  From a long time customer - you guys can do better than this ...

This has been a problem for over TWO YEARS and you're still pushing this broken app out to customers?  Why in the world would you do that?

T-Mobile Visual Voicemail is unusable. It does not sync messages unless manually done so. I receive no voicemail notifications, so I must continually check for messages. I'm running the app on Android Oreo.  I do not have the setting option "Close after screen locked".