From what I've seen this is a long term issue with you guys too. Congrats on the great service. I didn't want that interview anyways.

Have you already filed a ticket following the steps I recommended in the previous comments? If not, that's the next step you need to take to get this resolved. I understand this issue is causing a lot of us to miss important voicemails. It's also important that these tickets get filed so our engineers can determine why this is happening and find a fix.

Because I have an Android 7.0. I uninstall and reinstall T-Mobile visual

voicemail in the visual voicemail

visual voicemail from the play store. I would think that Apple would have

the same app from the Apple store. Are you able to uninstall T-Mobile

from, in your case, the Apple store. Like I said I have an Android 7.0 and

I installed metro PCS visual voicemail because it is owned by T-Mobile.

Their application has been working for over 2 weeks now. I get my email

notification sound, the voicemail icon at the top, and instantly populates

the visual voicemail. I'm sorry that's all I know

I am looking around for you.

Try this if not already

This worked for me AFTER resetting my VM password. All voice mails were

Also read all this..

- Toggle On Airplane Mode, wait 20-30 seconds and toggle off

- Check for a Carrier Update

- Toggle Press Side Button (or Home Button) for Siri Off, wait 20

seconds and turn it back on

- Set your device’s date and time to Set Automatically

change menu. I did that and by the time I hung up the visual voicemail was

back up and running! Try it and let me know if it works for you!

I've had this problem for several months. I don't get voicemails for up to a week after they are left.  I had the TMobile tech support create a ticket and try to fix the problem TWICE.  I can't take it anymore.  After some research I decided to switch carriers. It's astonishing to me that TMobile cannot fix this problem. Goodbye, TMobile ):

I have been having the same problem intermittently for several months; voicemail notifications randomly showing up late. Sometimes a few days late, sometimes, several hours late. Since the problem is intermittent, if I test it by leaving myself a voicemail, it does not help.  I called T-mobile a few times but they say there is nothing wrong.

Today, I started having the same problem with my text messages. I received 2 texts, one in the morning and one at around 3pm but they did not show up until 8pm. I called Tmobile and gave them the MWI troubleshooting code. The tech said he changed something called "Enhanced Voicemail" in their system. Apparently, something in their system got turned off. Fingers crossed that problem is solved but will be checking over the next few weeks.

If Enhanced Voicemail setting works , then great. I have Android 7.0 and when I spent 5-6 months trying to get T-Mobile to fix this issue I had seen something about T-Mobile and Metro -PCS are the same. So I simply uninstalled T-Mobiles Visual Voicemail and installed Metro PCS version from the Google Play store. I installed Metros and it has worked flawlessly since the 1st of February 2019. So I am sticking to this until it fails

I'm a customer of Metro by T-Mobile, and I had this same issue today on a Samsung Galaxy J3 Prime. Calling tech support (611) I tried to have the file the complaint as listed above, but they wouldn't because they claim my issue is resolved, and that they can only escalate it if it continues.

If your phone has a maintenance option/setting (Such as Device maintenance on Samsung phones) make sure that Visual Voicemail is set to be unmonitored, so it will not be put to sleep. Sleeping apps may not receive notifications, or they may receive delayed notifications. (availability, or service name may vary by phone make, and model)

On many Samsung devices, Device maintenance automatically puts monitored apps to sleep after a set time of not being used. Default is 3 days.

Samsung users can use the following procedure to see if it helps.

Close device maintenance after this. I can't promise that this is the solution, but right this moment, voicemail notifications are showing up in a timely fashion. Hope this helps.

Again, Metro by T-Mobile refused to file the service complaint, because the test voicemail gave a notification within 5 seconds, wouldn't give me a case number, reference number, or anything of the sort. All they did was make a notation in my account. Seems overall support for T-Mobile, and it's subsidiaries is just... horrible.

I know, I have to make exceptions to not close out apps with any kind of

optimizer. Be it battery or memory. I just found last month Metro PCS

Voicemail app is working for me and it has worked everyday for 4 weeks.

instantly I get my Visual Voicemail with the Metro PCS Voicemail App.

This is just ridicules! I have noticed this since I started to look for a job a few months ago, and it is still happening! Today is 3/12, since I missed the last call, it finally pushed the other 3 voicemails as early as last Friday to my phone! I did try to call customer care last time, what they have debugged have changed nothing. and they suggested me to get a new phone. Come on, I am using iPhone 6 not a Nokia. Even if  I do use a Nokia, am I not deserved to receive my voicemail in real time? Being a customer for 13+ years, and with a family plan, I am seriously consider switching to another provider this time 😠 😠 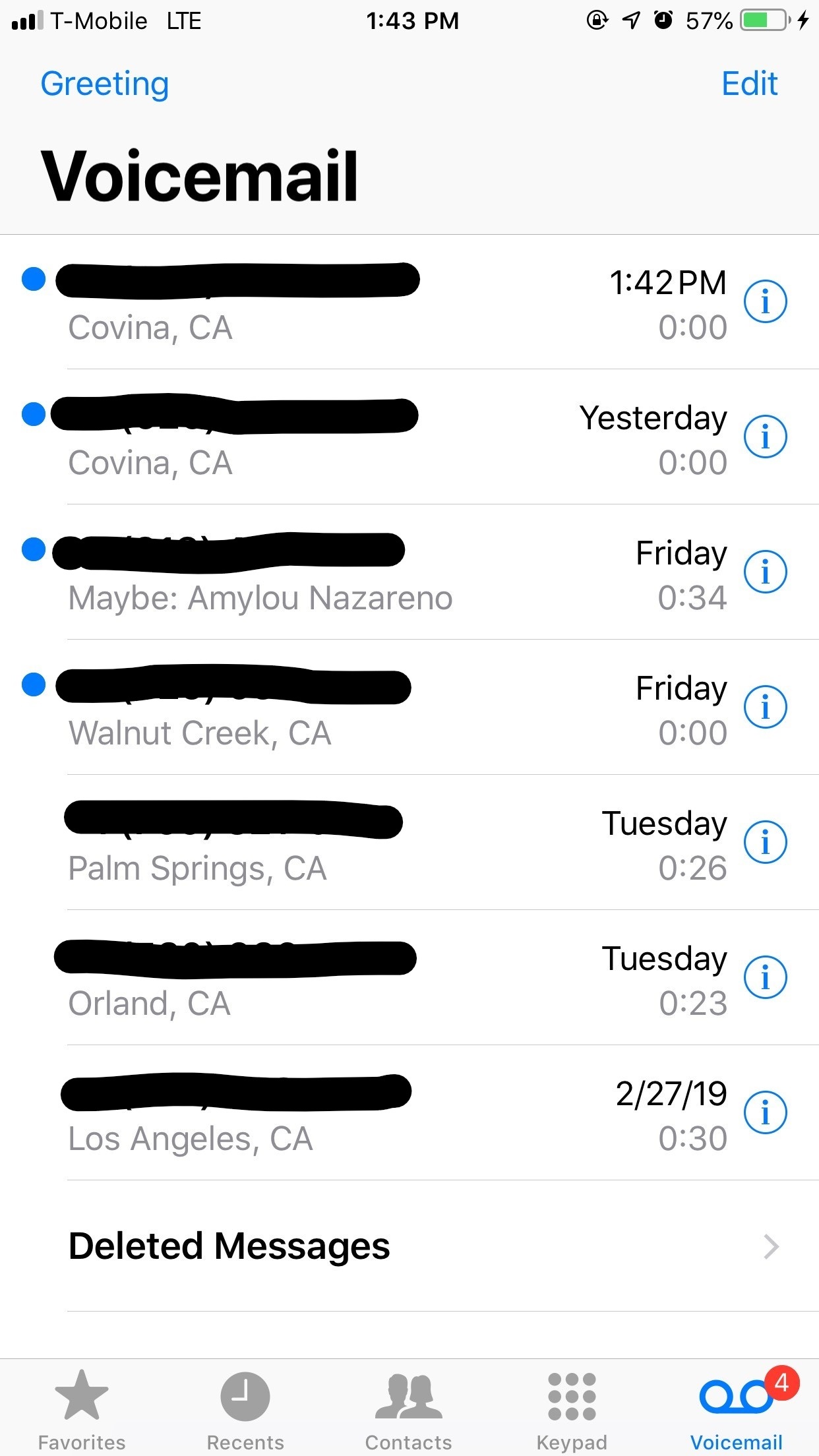 ​, I'm truly sorry this is happening. I don't think a new phone is needed as Customer Care mentioned. Have you had a chance to follow the steps listed as Correct on page 1 of this thread? In order to get this corrected, you'll need to file a ticket with our engineers.

totally unacceptable. I called support as per your last reply T-mobile. I was transferred to a call center who had no idea what that voicemail code even was.

After close to 30 minutes on hold/talking to person...no results. Said they will check into this.

OK here is my own troubleshooting and workaround.

First try to determine what kind of problem it is as posted on the top answer of this page:

2) if it's just a delayed notification.

If you see any call missed, dial and hold 1 to check your voicemail. You will find the answer of the above soon.

For me , the problem is 2). So for now my workaround is the way I just mentioned. I do not trust the notification anymore. And I do not bother to call customer care anymore because they just can not have the problem resolved.

If you have Android download Metro PCS visual voicemail. It solved my

Unfortunate that this post is from May 2018 and as of today the same issue is happening. I call support and they tell me it is an issue in my area and engineers are working on it and it should be back to normal in 24 hours. It is just funny as I have been experiencing this issue for probably the past 6 months so it clearly is not an issue in my area it is a T Mobile issue that they do not seem to have any idea how to fix.

Ok I have Android, So I uninstalled T-Mobile's Visual voicemail app months ago when I was having this issue

I have the same issue.  I had this with an iPhone 7 plus and not on the iPhone XS Max where I won't get voicemails for days and then all of the sudden another voicemail will be left and it triggers 4 to 6 others that were left days earlier and just show up.  I have other co-workers with iPhones various models and having the same issue and the only thing in common is T-Mobile where users with the same phones on other carriers do not have the same issue.  PLEASE RESOLVE THIS ASAP!  It is costing us business.  Yes, I've tried rebooting.  Yes, I've tried turning off WIFI and nothing.

I might give this all a try but looking at the thread it clearly isn't just and iPhone issue and so there has to be something on T-Mobile's side that needs fixing!

T-Mobile, this is still a huge problem.  I'm still waiting on 2 different voicemails left sometime in the last week, and I'm unable to listen to them.

I have posted my fix. What is for Android only. Uninstall T-Mobile visual

voicemail, then go out to the play store and install MetroPCS visual

voicemail. I did this back in January and it has worked perfectly for me. I

was having the same issue for months. Couldn't get any help from T-Mobile.

So I started thinking outside the box. I installed MetroPCS visual

voicemail and Wham-O it has worked flawlessly. Not sure if the Apple store

has the MetroPCS visual voicemail if you have a iPhone

This is still happening to both me and my wife. We have Motorolla phones running Android. It's very annoying and it's causing us to miss important voicemails/text messages. I'm thinking of switching carriers if this doesn't get fixed soon.

I had the same issue with my LGG5 Android V6. My fix is for Androids only.( may work for apple if they have metros version)

I did this back in January 2019 and it has worked perfectly for me.

I was having the same issue for months back in 2018. Couldn't get any help from T-Mobile.

So I started thinking outside the box. I installed MetroPCS visual

voicemail and Wham-O it has worked flawlessly ever since.

Now I just got a LGG8 Thin-Q With Android 9.0 PIE and I was not getting T-mobiles Visual voicemail again.