I saw last month that Samsung has release an update for the Gear S2 that allows sleep tracking and some other newer features. Will T-Mobile also be getting this update for our devices?

Hey folks! I don't have any new information to share but trust me, I am with you! I have the S2 myself and would love to have this update. What I recommend that you all do is "Follow" this support article so you will be notified when any software changes come down the pipe for the S2.

Ahh man! I would love to have that functionality built in. I know for a fact that I don't sleep well at night haha. I'm going to reach out to our content team for the Gear S2 to see if we can get wearable devices added to our Software Updates page! Stay tuned!

So is there any update on this? Will it show on the support page or do we know when the update will be available?

We are looking into it here on our side 😊 Keep an eye on the software updates page for all the latest.

I'd like to add my voice to this, I really want the latest Gear S2 update!  And there's supposed to be another one later in the year that brings some of the Gear S3 features to the S2.  C'mon T-mobile, show us you can beat VZ to the Gear S2 update!

I too would like to see the latest Gear S2 update. It's been out for a few months already! C'mon T-Mobile! Push that update!

I would also like to know where the update it. T Mobile always says it is good at getting updates out but this is slow. It is a freaking watch. how much spam can be added to that.

I came over to T Mobile from Sprint but I am really starting to think about going back. Yes there are a lot of things I like here but one of the things I was thinking that I would get by being here is fast updates and that does not seem to be one of them.

Yes I know someone will hit me for saying the word Sprint but you know I had great service with them and can a cell service just about everyplace. This has not been true with T Mobile or if I do have service it is so slow it's good for just about email only. Sad but true, I can't help it I travel a lot for work. The only thing that has saved me a few times is finding WIFI to hook into.

Come on T Mobile get off your butts and release the update already it's a WATCH.

Hey folks! I don't have any new information to share but trust me, I am with you! I have the S2 myself and would love to have this update. What I recommend that you all do is "Follow" this support article so you will be notified when any software changes come down the pipe for the S2.

This is ridiculous! At least give the people a refund for not getting what they paid for

you might also want to review the information that is posted and remove the lines saying it has support for Samsung pay which it currently does not.

Good catch! I am getting this to our content owner now.

Looks like the Gear S2 for Verizon got the update 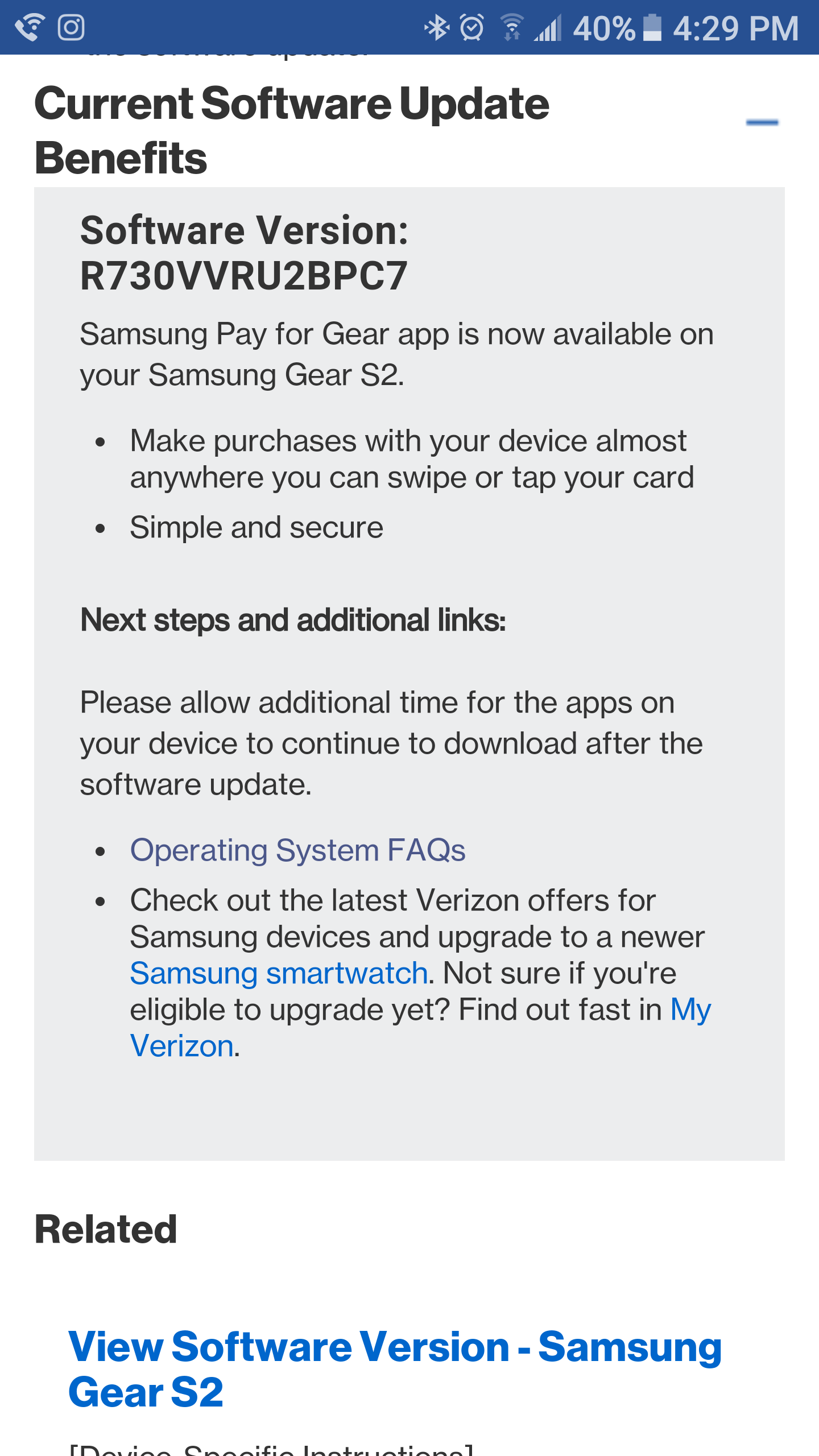 Personally I'm getting tired of the ridiculously long wait for updates, both for phones and now watches.  This is one area where Apple has gotten it right.  And as much as I don't care for Apple or their products, as I sit here with phone and watch, both with long overdue updates and missing features, Apple isn't looking too bad.  I'm not picking on TMO here, but all the carriers are at fault.  If Apple can push updates directly to devices, there's no legit reason that Google and Samsung can't do the same thing.

Yes I had been using Nexus phones on Sprint and never had any issue with updates. I know my wifes Apple gets updated really fast.

This main issue is that the phone carriers like to dump their crap on the phones and that is why it takes so long. But as for a watch, That is a joke what type of stuff are they going to put on it. From my reading over at XDA it looks like the only one that has not released the update is TMO.

The bad thing is there is going to be one other big update latter this year to match the S2 with the S3 and at this rate it will take for every to get anything.

Manufacturers have admitted in more than on occasion carriers don't dump their crap as to why it takes so long.  Carriers give manufacturers the code in advance and it Sony AOSP project showed that carriers on average take only about a month on a bad day when they test the updates.  See HTC for example as in terms of speed and they have "carrier crap" on them.  How can they do it so fast if it really takes that long?  It doesn't... It's manufacturers delaying it on their own and refusing to put resources into it because it doesn't generate them revenue.

Wow tidbits you really have no clue as to anything do you? I wanted to see what other type of posts you do and they are all like this one. T-Mobile is god above all and does nothing wrong and everything is the fault of the user or who ever makes the phone / watch.

You Sir are a online troll !!!

If you actually read all his posts, he calls out T-Mobile when they mess up too. In this case he is right. The manufacturers develop and need to get the updates certified for each device and variant that is sold. T-Mobile does nothing other than testing it before it is released. This is the same with all carriers. Samsung just hasn't made the one for T-Mobile yet. Though they kept listing Samsung pay as supported which is wrong. To me that's probably an oversight rather than for nefarious purposes. If they just copied the marketing material from Samsung, that could have been overlooked.

So you went through all the hundreds of thousands of posts I probably written and read them all or did you skim the last 50?

At times I correct misinformation like you posted. Motorola, and HTC did press releases and admitted to what I just said. Never mind the cute pictograph they have out saying the same thing which people tend to overlook. Carriers been saying for years if they could stop selling manufacturers products they would. They make all the money and the carriers take all the blame. Carriers don't make money like people think they do and carriers don't touch code like people think they do.

My next post will show I am on the same boat as all of you but then again I am not sweating it because I understand T-Mobile is at the mercy of manufacturers.

Sorry for the bad photo 😊 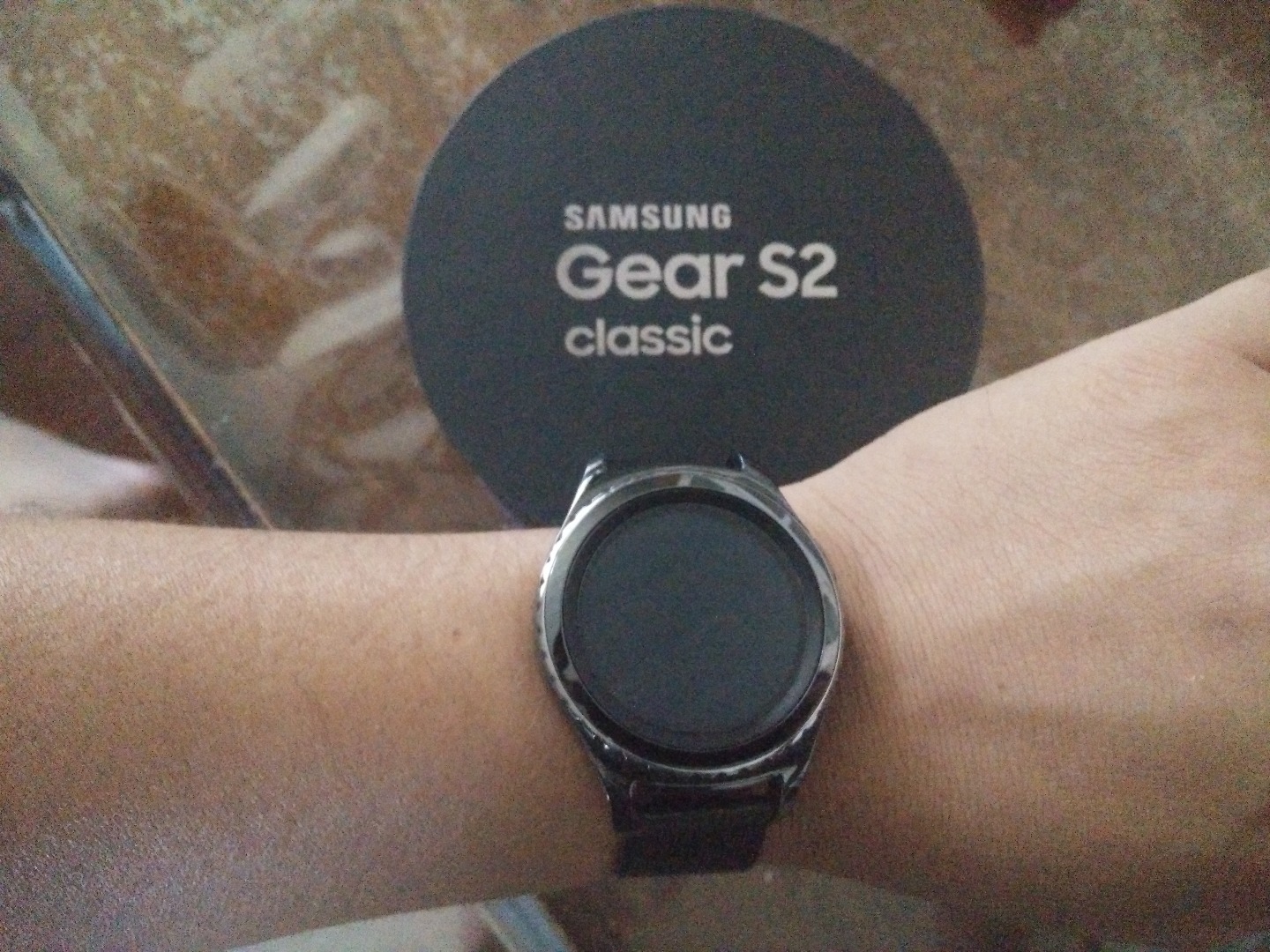 You got to Bestbuy to buy an advertised Windows 10 pc take it home only to find out it's running on Windows 8 with no option to upgrade to Windows 10 because of hardware limitations. You paid for the more expensive model, and get a an older operating sytem with less features. This sound right to you?

That scenario did happen though.  Wasn't with Windows, but with MacOS.  PPC macs were still being sold and then Apple dropped support for PPC macs. Those guys were left high and dry, but no one blamed the retailers.  They all blamed Apple.

We will be getting the update.  It's just a matter of when, and not if.  Which is different than the scenario you are using.

It makes me happy to hear that we will definitely be getting the update, but it doesn't make me happy that we have to wait so long for it. Especially when they advertised it with those features and to be running on Tizen 2.3.1 which it is not.

Also makes me sad to know that we will most likely be left waiting for the newer update also.

The one that gives the S2 the same features as the S3 like using the rotating bezel to answer phone calls and the replacement of Milk Music with spotify. Considering Milk Music will discontinue support starting September 22.

To be honest I care more about the other features than I do about Samsung Pay, but thats not to say I wouldn't use it or appreciate it.

Please Samsung for the Love of God! Quit procrastinating and make a better effort to give your customers what you promised them. Because if this continues I'm sure you will lose customers to a more competent cell/smartwatch manufacturer

I feel you, but once manufacturers get our money they tend to delay it.  The difference between us and Europe(which historically gets better support) is we blame carriers, and they blame manufacturers.  Remember they sign contracts and they do you carrier/regional bloat as well.  They also do carrier testing to boot.

So, simple solution.  Let the manufacturers push their updates without carrier involvement. Now the carriers won't be blamed when an update is late and if it breaks the device it's not their fault.

Don't tell me it can't be done.  Apple does it and so does Google with the Nexus devices.

Apple is really the only one. Google with carrier nexus versions also need to have them tested by the carrier. Carriers need to test and certify that the update don't cause problems for their networks and verify their functionality with their specific services. The manufacturer won't do that and can potentially cause greater problems if it breaks stuff.

Already been proven that wrong regardless

If you check Apple section people are clamoring and blaming carriers for what doesn't work. Even Apple reps pass the buck from time to time even when it is a known issue to be otherwise.

People also complain about what doesn't work on Nexus devices and carriers should help bring those features. People right now are complaining when buying unlocked and unbranded devices to T-Mobile about how this and that doesn't work right.

Carriers have always been in a no win situation.  I have been here long enough and so have others and will tell you it isn't that simple.