Of all the phones to come out this year, the Huawei Mate 20 Pro has me the most intrigued.  While not available here in the USA, I was wondering if an international variant would work on T-Mobile, particularly for wi-fi calling.  Here are the bands the Mate 20 Pro works on...

From what I'm seeing, it looks like it will work for calls and data, but I have no idea about the Wi-Fi calling aspect.  Thoughts?

Very good review and comparison to the 6T you did!! Very helpful!

Let me know if interested in the GCam app for the 6T. It won't make the pictures Mate 20 Pro quality, but you will definitely notice an upgrade in quality. I don't even bother with the stock camera app anymore. Night Sight helps with low light & nighttime pictures too, much like what I believe is on the P20 Pro and Mate 20 Pro (Night Mode).

The model number of the Canadian Mate 20 Pro is CLT-L04.

But do we know if that model actually gets T-Mobile VoLTE IN THE U.S.?! Has that been confirmed by anyone?

No, but two of the Canadian carriers use a very similar setup to T-Mobile, including WiFi Calling.

I just looked up that model # you gave, and apparently it's for the P20 Pro, not the Mate 20 Pro.

Okay.  I can try a different store to see if I get better information.

According to Telus Canada, it is LYA-LOC.

I dunno. When I looked that model # up, it came up as a Huawei phone, but I didn't see anything that confirms it's the Mate 20 Pro.

IIf I can find one in a store, I will try to grab a picture of the box or the About Phone screen.

Interesting..........in the Multimedia section, it lists the phone as having "HD Voice", which is an indication that the phone DOES have VoLTE!

The thing is though, just b/c it has VoLTE in one country doesn't mean it will on T-Mobile in the U.S.

Still not even sure one can buy this version in the U.S. either. If so I would be willing to try it out and see if I can get VoLTE working on it, as long as the seller has a return policy. lol

These things are sold out just about everywhere up in Canada.  Here is a picture from the About Phone screen of the demo I had to go to half a dozen stores to actually find. 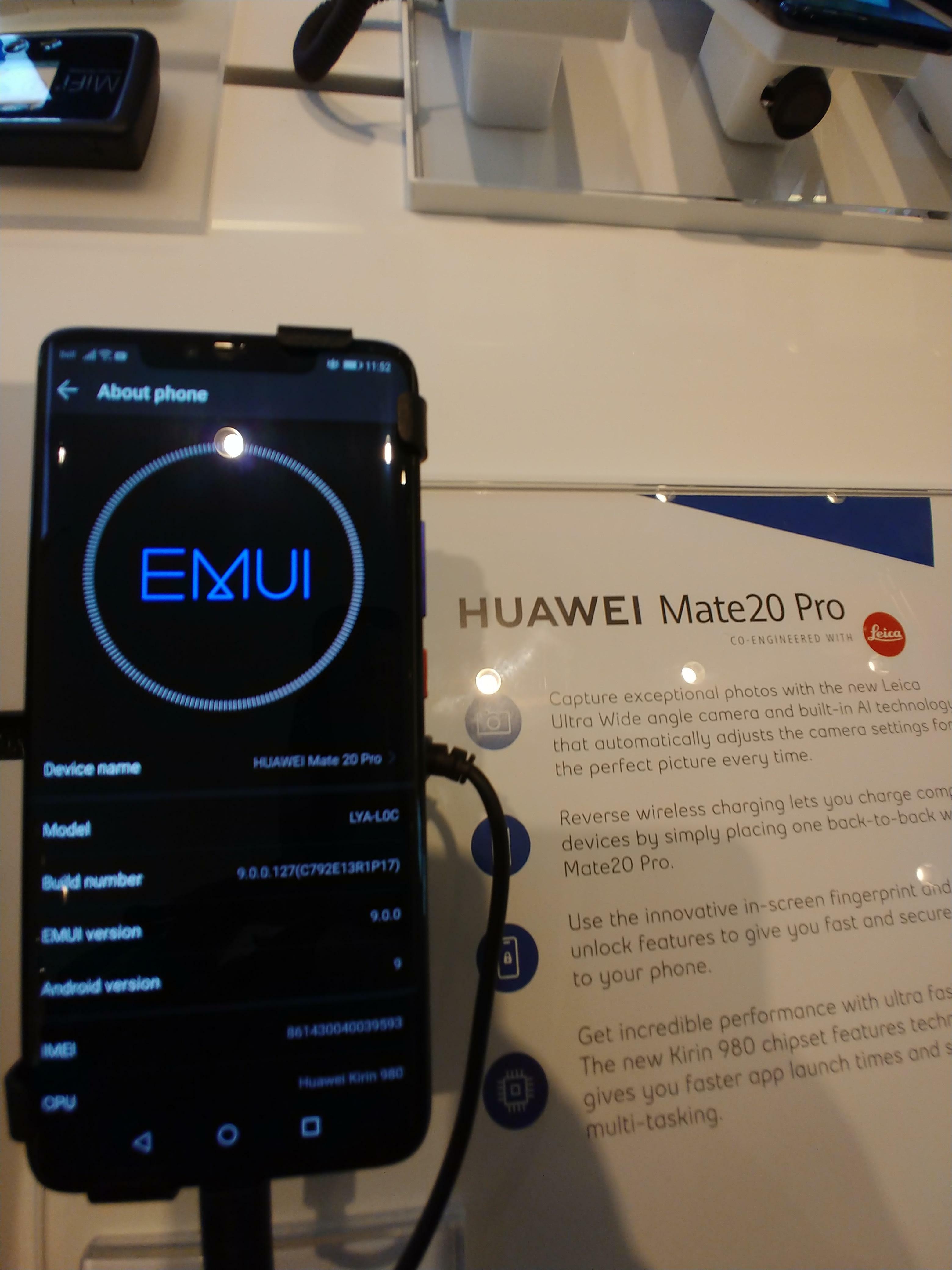 Lucky you! Here in the U S., if you "dare" to buy one, don't count on having the best reception vs. other T-Mo locked phones. NO access to Bands 12 & 71 cuz no T-Mo VoLTE. I think it's all BS about them spying on us. BEST phone in the world, but can't get it without a big sacrifice.

I got the T-Mo 6T, which is GREAT!! But even with the GCam app, the camera still can't do what the Mate's does for Night time photos, though it's not far off either!!

This is why I didn't get the Mate 20 Pro for use on T-Mobile. Awesome phone, just not in this application.  Like you,  I bought a 6T, and it's been great!

Yeah lou. I always have this bad luck too. lol Sony has been my fav for YEARS (had the T-Mo Z3 too), but b/c of their or T-Mo's or both's refusal to sell through T-Mo (or any U.S. carrier), I end up missing out. It didn't matter in 2016 when I got the Xperia X Performance b/c my area didn't have Band 12 yet anyway. But now it does. Yeah the XZ3 I got (and returned) had VoLTE (a first for an UNLOCKED Sony phone lol) and therefore access to Band 12 for calls, but still no Band 71, which my area (Chicagoland) is about to get deployed within the next month.

I'm just not a fan of Samsung or Apple ENOUGH to buy their phones anymore, though that really applies more for Apple b/c of their ridiculous prices. I owned the S5 (4 days lol) and S7 (4 mos), and really hated both overall. Lots of bugs and issues, crappy UI, etc. Though now they're a lot better and I MAY even consider the S10+ next spring. Though at the moment my top 2 faves are the upcoming P30 Pro and Xperia XZ4 or XZ4 Premium. I think Hauwei and Sony have the best cameras, though Apple's is great and color accurate too. Sony is more color accurate, where Apple and Samsung are still better (overall) at night. But I think that may change next year.

Did you get the Arnova Google Cam "GCam" app yet? It's the port over of the camera software app from the Pixel phones. Stock is pretty nice, but the GCam app to me overall is better and offers more detail in the pics too, as well as the better Night Mode. For the most part, it I think matches the best phones for daytime and selfie shots, though for Night Time it's really good but not THE best.

tyvm for sharing these findings mouse looking dog creature. I myself is thinking of jumping from Samsung as the prices are ridiculous these days. I am ok with no wifi calling, haven't used it once in the last 3 years.

get the one plus 6t I think you will be very pleased with the phone. You get all the flagship specs and important features needed to have a good experience on T-mobile for a reasonable cost.

I can vouch for what dragon is saying. I've had the T-Mobile 6T now for about 2 mos, and it's FANTASTIC! The screen is amazing (even outdoes my old LG V30's, which actually had a HIGHER resolution), awesome software (Oxygen) which many think is superior to Stock Android..........the battery life is fantastic, it's very fast, the charger ("Dash") outdoes QC 3.0, on-screen FS is cool, though I usually the Face Unlock feature which is super fast, etc etc. The camera is pretty good too, though I use the ported "GCam" camera mod which is based off the Pixel 3. It offers a noticeable upgrade vs. the stock one. If interested, lemme know and I can post the link here to download and try it out. Is it AS good as the cameras by Sony, Samsung, Apple? No, but it's DAMN close........esp for daylight outdoor pics. And even some indoor. Free too.

I got the Mate 20 Pro Dual SIM version today.  Amazing phone but as stated in previous posts there is no VoLTE and no VoWiFi support .  Please see the screenshot below .

Yeah that really sucks. If it had it, I FOR SURE would've bought the Mate 20 Pro!

Would be nice if Huawei had a firmware update that allowed for these bands (66+71) to be used. VOLTE works in Hong Kong and other parts of the world. Reception around Irvine is bad as is as Irvine does not really allow any cell towers to be put up so they can make people use Cox Cable which they have a monopoly over on and over charge customers with. This then forces people to pay extra money to COX Cable every month to have internet usage at home as cell data reception is poor for some odd reason 😏

Oh for sure magenta.........if they offered to send a software update that could add Band 66 & 71 capability, that would be huge! But VoLTE too. I have the OnePlus 6T right now and love it, but this spring I wanted to upgrade to either Sony or Huawei. But with all that's going on with them lately (espionage, etc.), and NO VoLTE or Band 66 & 71, I'm prob gonna pass on the P30 Pro and focus more on the Sony Xperia XZ4, which I think is gonna be incredible!

At least the P20 Pro had T-Mobile VoLTE. The Mate 20 Pro didn't even have that.

I'm not holding my breath on Huawei sending out an update like that again given with what's going on. That applies to not only the upcoming P30 Pro but the P20 Pro and Mate 20 Pro as well. Hopefully I'm wrong. I also hope they're cleared of all these charges, but it's getting harder and harder to see them as being innocent of the charges made so far.

Sony Xperia XZ4 will most likely come with Facebook preinstalled into the OS with no uninstall option which will be the ultimate built in SPY tool but you could supposedly disable that built in SPY tool which has been know to SPY on users and track all their movements. No wonder China did not allow them into China lol..

Many accusations against Huawei but none of the latest smartphones have concrete evidence in the system that it is spying on users. It is possible but so far none have been found on new recently released smartphones unlike Facebook.