Has anyone else had issues with the "radio" since the last update to G935TUVU4APIA??  I know John Legere had announced late August we would be getting an update for the radio to activate the 4X4 MIMO and 256QAM in the S7 and S7 Edge so wondering if there is a glitch in the firmware.  Since the update it has happened few times when I notice the phone has been quiet or I try to do something and it says it is in "offline" mode.  It shows bars but no E, 4Glte, 4G etc and when I go to service mode it shows what Band it is seeing but says "idle".  I have to go into airplane mode once or twice for over a minute or two and that seems to kick the radio back on and it is fine again.

Curious if anyone else has seen anything "hinky" with the radio since the update.

Having the same exact issue and it's infuriating! I had it happen 4 times this past Sunday while out and about, it's very sporadic and I can't seem to duplicate it. I did a factory reset in hopes it would help but it is still occurring (actually did the reset Friday evening and Sunday was terrible). I even had a situation where it showed I had 4G LTE but nothing would connect.

I have seen a host of other issues with the update (are you getting push notifs? I saw someone else say they were not) but I haven't seen this one mentioned yet.

I am going to let this sit a moment and see if anyone else chimes in while also cruising out internal forums to see if there are other examples for me to pass up.

Got the update OTA last night, and haven't really noticed any difference either way. The coverage in my home is not really the greatest to begin with, but is still usable.

I'll watch this thread (and my phone) to see if any new information comes to light.

Thanks for the input ‌ 😊

Please keep us updated if your experience has any changes surrounding the update!

Well it happened again today and think I have figured out when it seems to do it. I have one office building that I know when I am in the elevators that are on the inside and I lose signal.  Like in the past I didn't catch it until later when I try to use my phone and usually get a message you are off-line and look and see 4 to 5 bars but no indicator of network (ie 4G, 4GLTE) and if I go into service mode is just shows idle.

‌ do you have somewhere where you know you don't have signal?

There's no place where it consistently cuts out completely, but signal is usually worst in my bedroom and dining area. I haven't figured out exactly why in those two areas, but that's where the signal will typically drop to one bar.

One thing I can say since this update is that it seems like the battery drain is a bit faster.

I started having the same issue after updating. My now only have 4G and sometimes 3G, which never happened before the update. sometimes, it says emergency until I restart the phone.

I think this update have some glitches.

Is it just in certain areas? I don't seem to have any issue with mine. Does it still happen after restarting the phone?

Yes and even though I did the update via switch I cleared the cache out.

If I restart it connects to the network fine. Usually just one or two

cycles of airplane mode will get it reconnect. It just seems to need

something kick the radio.

When it isn't connecting to the LTE (or any service it has signal, but

comments of the same issue on some Note 7 threads. One would have to guess

‌ see this is from the service mode when it seems to disconnect from network, it has signal but it will just stay in this "idle" state.  I should note it does this on Band 4 also just happens when I got home and noticed that it had done it again and at my place I only have Band 12 but it will show the same thing just Band 4.  In this screen shot it shows no service bars but I had attempted the airplane mode cycle but when it came back I got the x no service, cycled the airplane mode again but this time left it in airplane mode a bit longer and it came back to 4Glte. 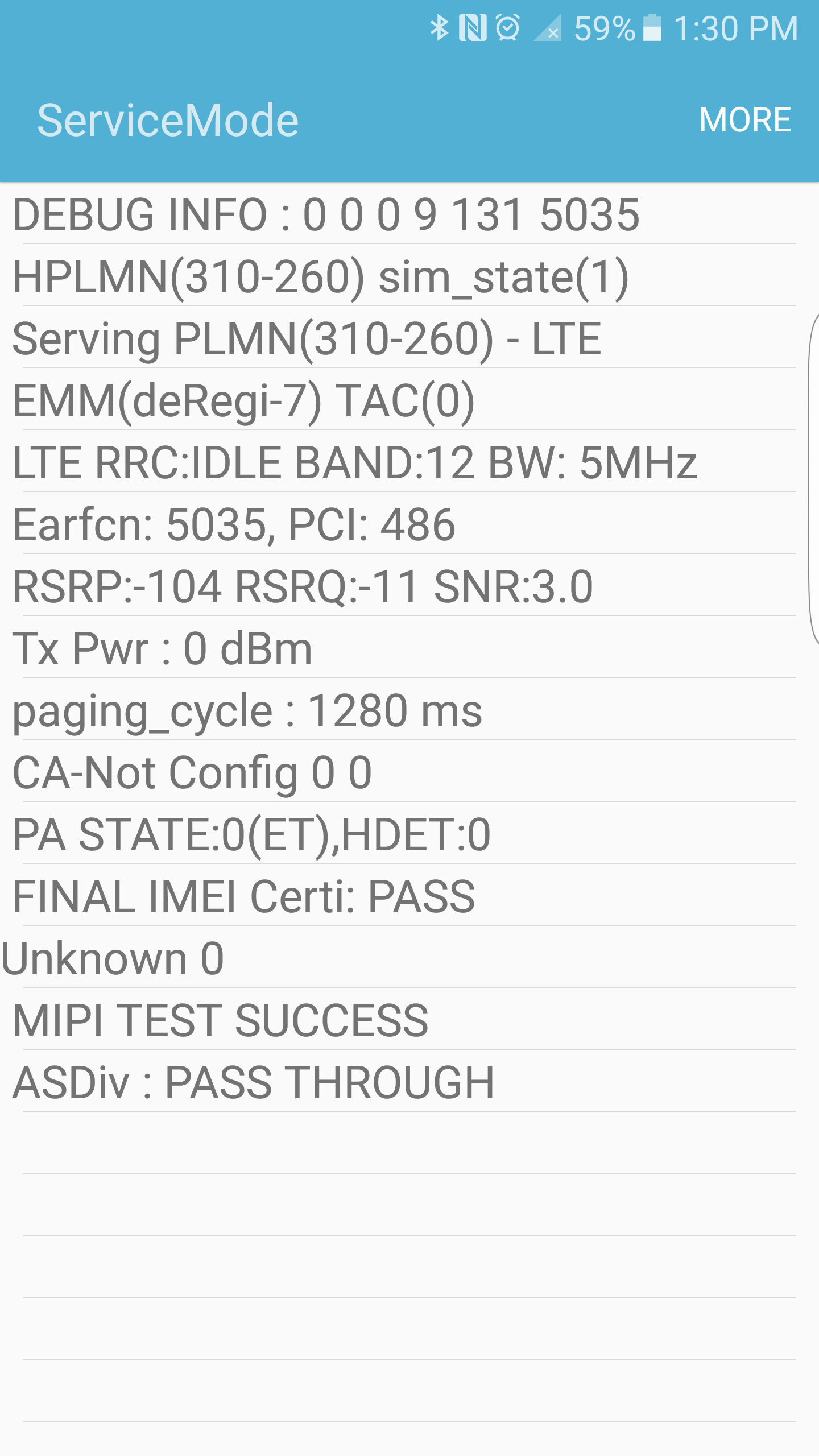 I'm keeping an eye on this and checking in some other places in the hope I get a better idea of what is going on and who needs to get the info.

Having the same exact issue and it's infuriating! I had it happen 4 times this past Sunday while out and about ... it's very sporadic and I can't seem to duplicate it. I did a factory reset in hopes it would help but it is still occurring (actually did the reset Friday evening and Sunday was terrible). I even had a situation where it showed I had 4G LTE but nothing would connect.

That is the same thing I am experiencing since the update. This needs to be fixed

So we have 3 examples of it at least, that gives me some more leverage to look into this. Are you two experiencing it the same way ‌ describes?

Yes, the same issues as outline by Steve. Its the base G935TUVU4APIA, with the new update.

Weird. I wonder if it might be in the way the update is applied. When it came out I did a master reset on the phone, manually flashed with odin, then master reset again.

Well, I was on my way into work and was thinking to myself, boy I haven't had this issue since Sunday ... guess I jinxed myself LOL Took some screenshots in hopes they may help. 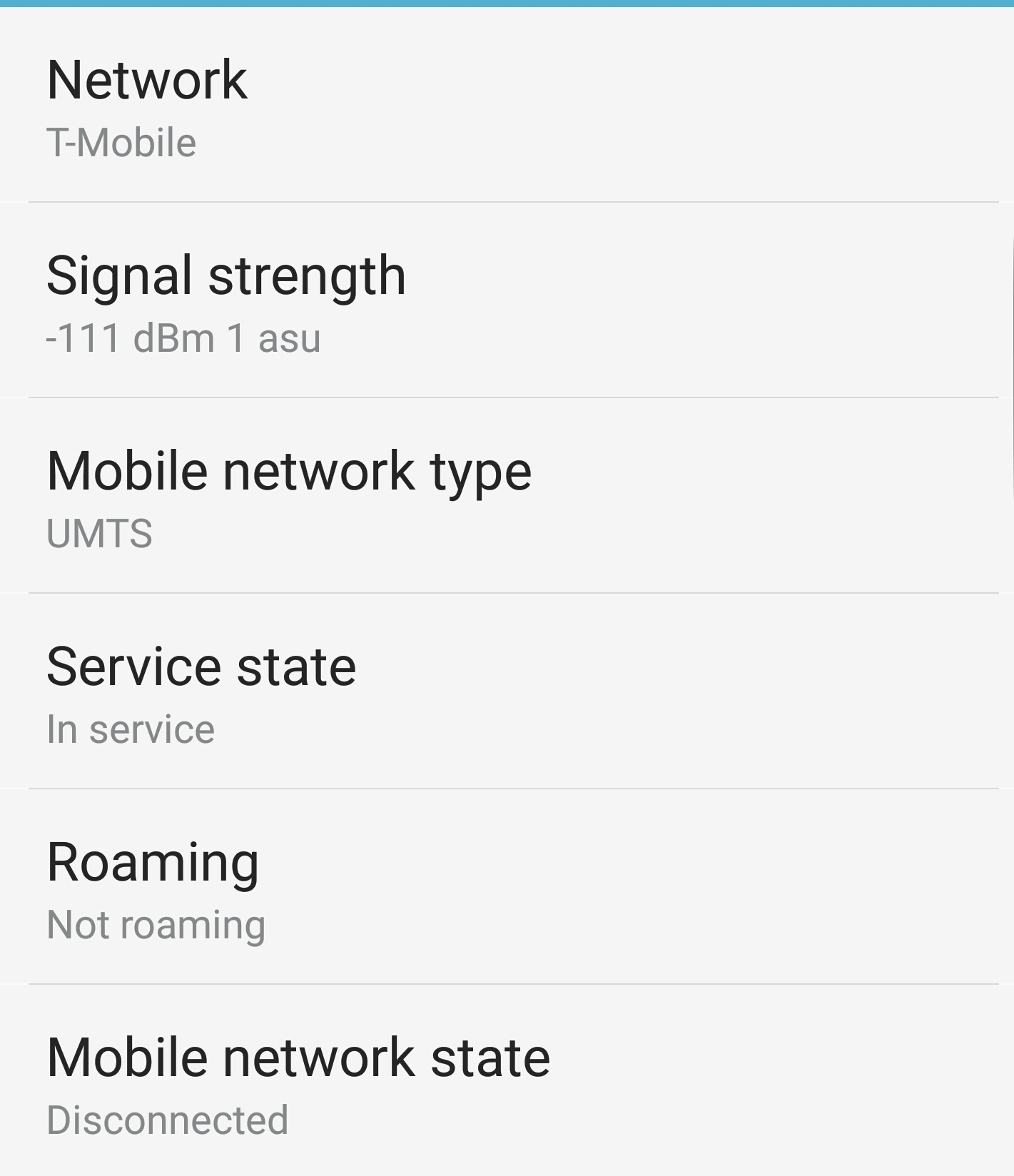 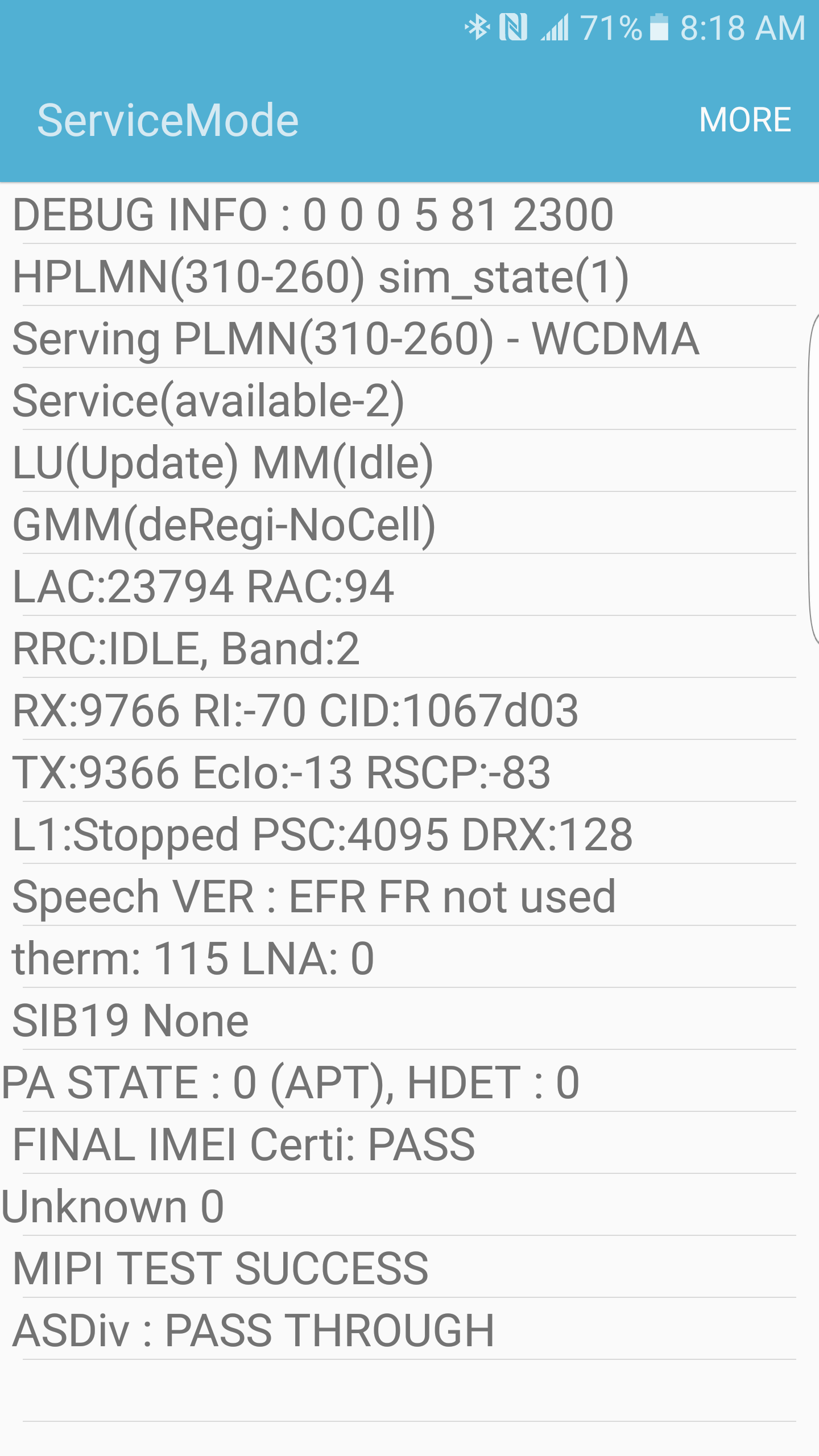 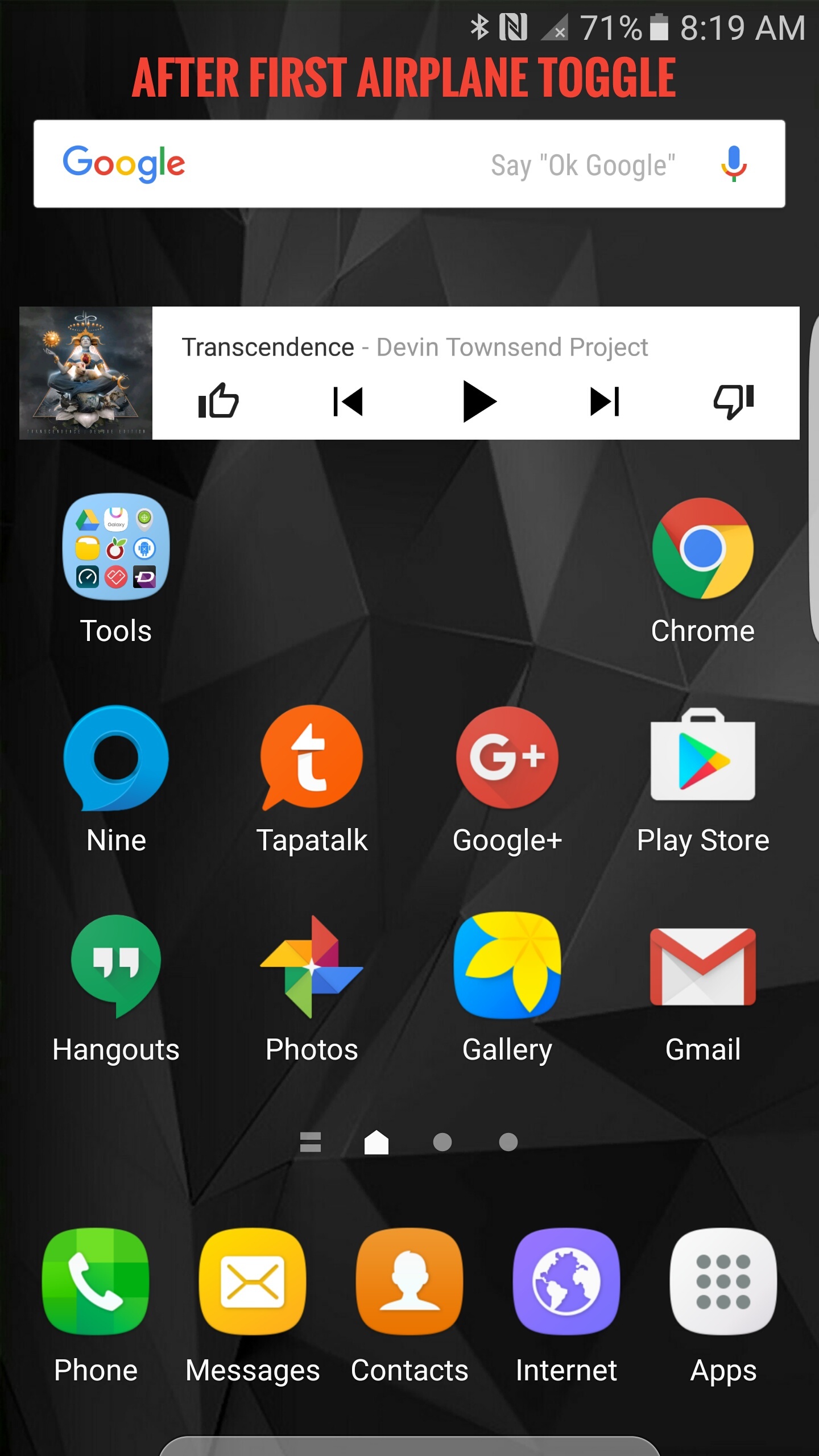 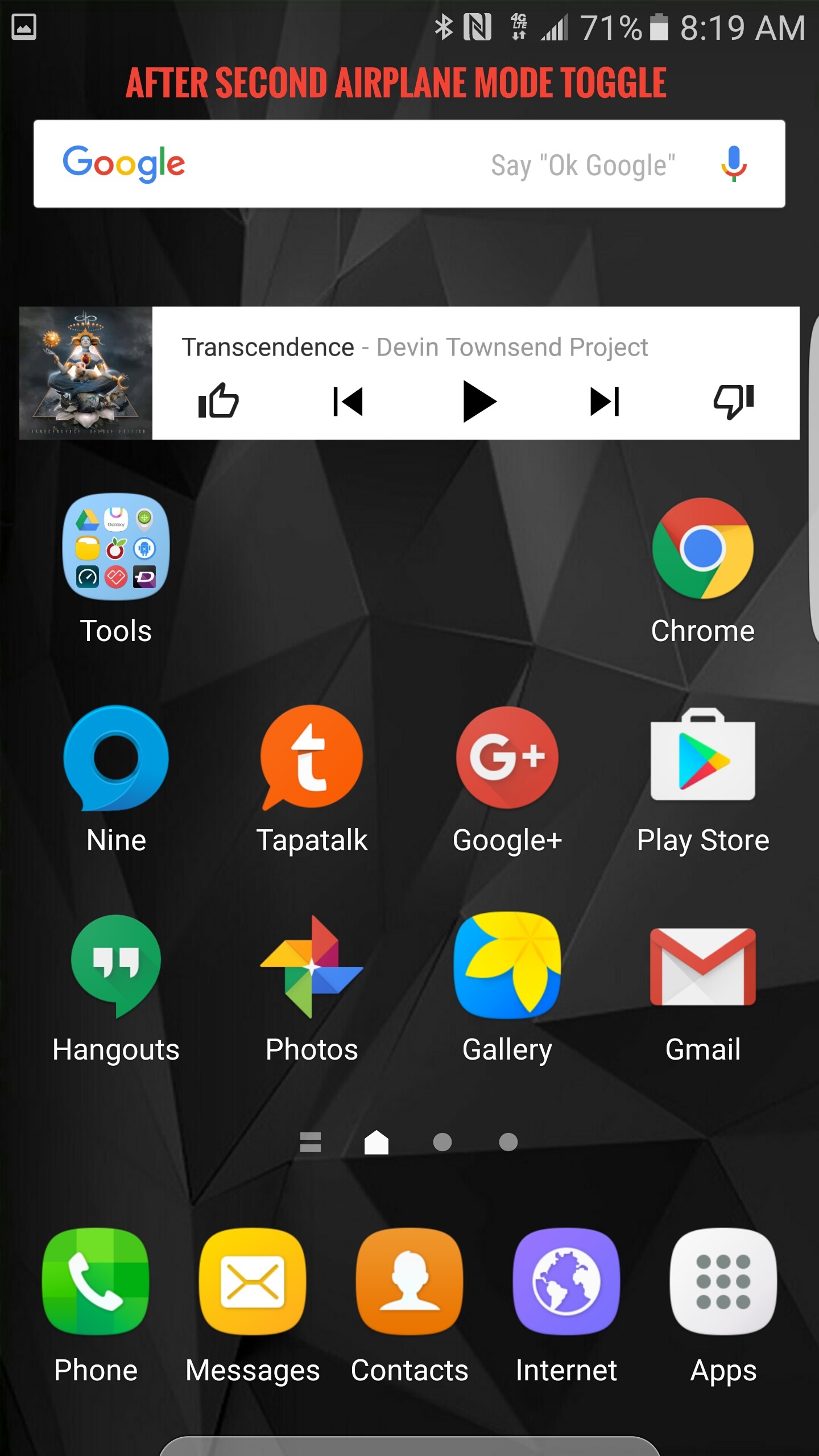 Well, looks like it may be one of those days... Just happened again

Accidentally posted this on a different question. Having the same issue after the update. Phone is basically wifi tablet now. Tried resetting network settings, resetting APNs to default. Once the phone loses its connection, it can never reconnect to the network. It just says (No Service) or (Searching). It sees the T-Mobile network if I search for networks, but if I try to select it, I get the "Unable to register on network" error. Sometimes turning the phone off and back on again fixes it, but not every time. Airplane mode doesn't seem to fix it at all. One other thing I've noticed is that WiFi Calling no longer works at all even when I have previously connected to the LTE network fine. It stays greyed out as "Enabling". I haven't done a factory reset at this point, and would seriously hope that I don't need to do so...

I can confirm a factory reset does not correct this issue. When it happens, try toggling airplane mode twice ... only doing it once doesn't seem to get it for some reason.

This is beyond frustrating! I can go a few days without issue and then have days where I am losing connection constantly! Also my battery life has been godawful as of late too ... not sure if the two are related but can't help but think they are.

its the new update. I tried all what you said you did and still experience the same problem.

I just got the OTA update notification last night 10/16/16.  I think it might be best if I keep postponing my update for now until there is some sort of clarity with this critical issue? It's a 352mb download, please let me know how long I can keep postponing this update. Thanks

Probably jinxing myself but it has been almost a week with out it getting "hung".  I have found with the airplane mode trick that you have to leave it in airplane mode for a bit and even then sometimes a second try always gets it. Once time I had to restart it but it connected right back.

Have you tried flashing the firmware manually with Odin? I am thinking maybe something didn't update correctly.