Why is it taking so long with 9.0 update for the LG G7? 10 Q system update is already being talk about and they saying it could even come out in March and I'm still on 8.0.lol not even 8.1 lol that is sad.. And I know y'all don't even know.. Which is sad. If y'all do know I apologize if y'all don't it's sad.. Is there a date Gor the 9.0 system update for lg g7

We're already working with LG on the update. 😊 You can keep an eye on this page: LG G7 ThinQ: Update to Android 9.0 to stay in the loop with the progress we're making.

The update comes directly from LG, not T-Mobile!  Why are so many people clueless about where the updates from their devices come from?!?  Go pay LG's forum a visit and ask them what the hold up is.

Syaoran - I am not a T-Mobile Employee but I could use a new job!
L

If I know I wouldnt be asking this question. That was the purpose of asking

this question so I can find out..Duh

Android 10/Q will not become available until around October this year on Pixel devices.  The private developer beta tests will of course begin sooner than October.

LG is horrible about updates.

We're already working with LG on the update. 😊 You can keep an eye on this page: LG G7 ThinQ: Update to Android 9.0 to stay in the loop with the progress we're making.

Nice! but how long? Like a month or two.. This will give insight if I need to get rid of my LG. G7. I wasn't going get it the LG G7 But they put out a fake news saying that they have a system update center and they will be doing faster updating.. They broke there record on being slow with there system updating with that system update center.. Lol smh

Haha I completely understand! We don't have a specific timeline because a lot it depends on how the software testing goes. Here's an idea of the three phases we go through to complete software updates: 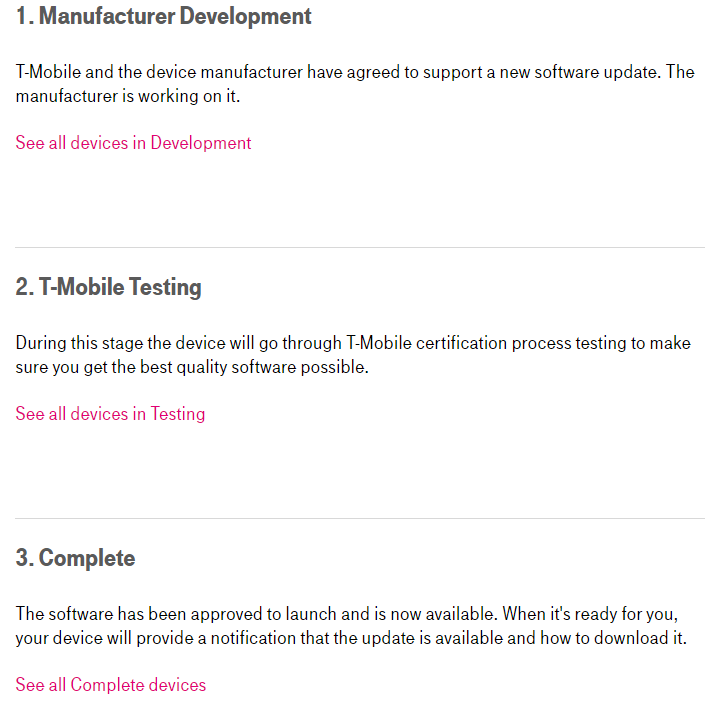 Thank and appreciate your professionalism!

To help your statement have some facts...in the U.S

No, the T-mobile updates COME from T-mobile and T-mobile alone.
The update must be created by Manufacturer, then released to carrier then pushed by carrier OTA.

The U.S is the only country in which this works. Outside of the U.S, they go from manufacturer to Phone OTA.
Which is why the International unlocked version of every phone will receive the update prior to carrier version of phone. (Not to be confused with U.S Unlocked sold at Best Buy).As T-mobile will admit to, they receive it from Manufacturer, then they test, and then and only then, will the T-mobile version be avail. for download.
At the moment, if you were to search for pie for other carriers for your phone, you will see the individual international version and the U.S carrier versions [Sprint, T-mobile, Verizon, AT&T].

So to call people clueless yet to give out incorrect info...
Just make sure you fact check your facts first. Let me know if you need sources... Although, T-mobile already did that with the post on this forum pointing everyone to their Software update page with their process where it clear as day provides proof of what i have stated above.

As you can see, you were correct to ask.

That you very much! I appreciate the response with facts!

Not that I know of, although T-mobile is anti-pre-information sharing. No

one will know anything until after it has been released.

At this point, my best guess is around the one year anniversary of Pie being released if at all.  The "In Development" thing is a nice way of saying "you'll get it if or when we decide to take the time to release it to you non Samsung having plebes."

The un-carrier is still using carrier tricks to force customers into phones they have no plan of supporting if nothing we should always have the newest security software patches and we don't even get those. T-Mobile don't force customers into buying the new phone that just came out just because it is more secure because YOU failed to provide security updates. Be what you promised.. the un-carrier, stop making excuses and start making software releases to phones you have sold. You have the power use it in the right way.

What you don't seem to understand with your dated knowledge, is that carriers can't be trusted to not screw up OEM's devices, so the OEM produces and pushes the updates for their devices and it has been this way for almost 5 years now and longer for the top manufacturers.

Syaoran - I am not a T-Mobile Employee but I could use a new job!
E

Do we have the latest security patches for the LG G7 syaoran? If we do not I am on point and current, if we do, I will accept your feeble attempt to appear half intelligent. The next you want to comment on my comments make darn sure that the topic of discussion is something you know about, and not a copy and paste of someone else's thoughts.

I don't know about the G7 but my V30 has the March security update.

If you look at this article it looks like with the G7 that all the carriers don't have the March security update.

Oh poppycock, its 2019 q2... Tell me why it's still in the beginning stages at development.

The way that you manage your updates detours me from utilizing tmobile as a cellular communications provider.

Honestly at this point I only blame myself. I know cellular providers take a long time to roll out their updates on phones they sell. For one, buying a phone at your stores is horrendous and an embarrassing task and secondly had I bought the unlocked version, I'd have Android 9 on my LG G7 months ago.

Heh, color me not shocked.  May 7 and it's still not even in "Testing" yet.  Oh how I love having carriers pi** on my head and call it rain.  The latest security patch isn't even here for the G7, so my guess is pie is not so much a "when" question anymore as it is an "If" question.  There are other issues with tmobile that I'm having as well and frankly the culmination of lack of give a F and horrendous customer service is why I switched from ATT to tmobile.  Looks like it may be time to shop around again.

Cellular providers have nothing to do with the update schedules and haven't for years.  Manufacturers did not like carriers messing up their hardware and giving them bad reputations.

Listen guy, Android 9 is available right now for unlocked LG G7 and your telling me it's nothing to do with cellular providers lol... Why does this page even exist then?? TMobile has to put their own software on the update to include locking the device, show TMobile upon startup and include the TMobile chime. But okay, I blame LG for being late with the update already, I'ma blame them again for slacking on putting TMobile software in it as well.

Each carrier takes time to update.  LG works on each carriers update seperately.  Other than some basic carrier app compatibility  testing before release, LG does everything else, including the push of the update when LG decides it is ready.

Not sure how it is tmo fault that lg hasn't released the update to them for testing. And if you could quit complaining for a minute and do a quick web search you would see that pie hasn't been released for any G7 (Verizon, sprint, etc) which clearly shows this is not a tmo issue. LG is notorious for their slow updates or flat lack of updates for their devices.

The unlocked version does certainly not have 9.0. The south korean model ONLY has it. This is 1000% lg