Is there anyone else out there experiencing radio problems after updating to 6.0?  With Lollipop it would connect fine, but this morning it took 5 minutes to find and register on the network.

thats weird. my v10 is doing the same thing. as soon as i got that update, my data connection keeps dropping off. Has any discovered a soulution to this issue?

So far, t-mo wants to help solve this problem...but the software and hardware engineers are stumped.

Sent from AT&T Mail on Android

created by dan559 in Devices - View the full discussion

thats weird. my v10 is doing the same thing. as soon as i got that update, my data connection keeps dropping off. Has any discovered a soulution to this issue?

Not interested in these emails anymore, or want to change how often they come? Update your email preferences.

Wow, that's really odd this happened. 😕 We haven't been getting a massive amount of folks reporting this. I would try powering down the device for a moment then removing/reinserting the SIM card. If it's still having a hard time connecting, you may want to master reset the device. Resetting can help if something's a little wonky after an update. 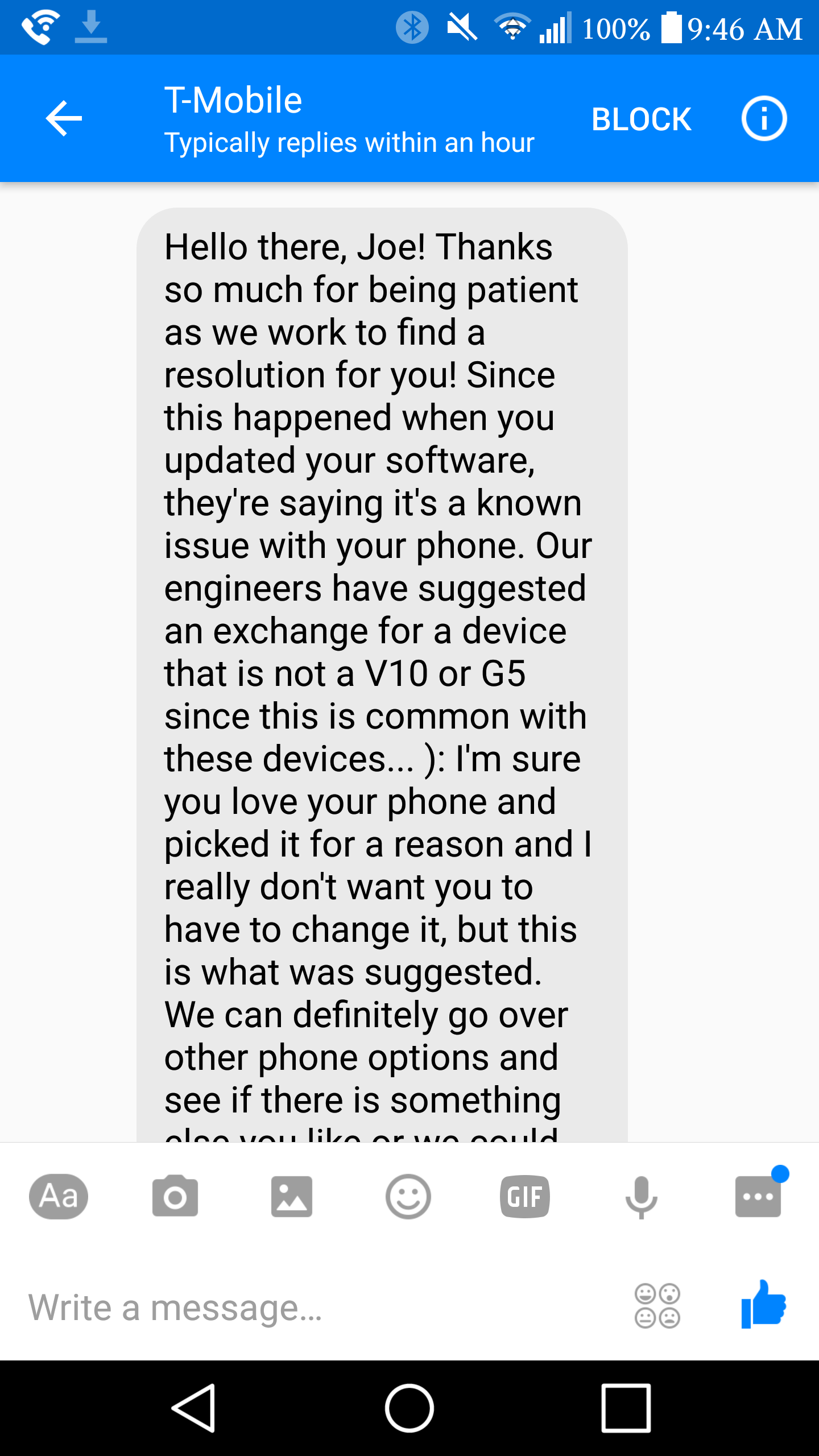 I have tried all suggestions, minus getting a new phone, and nothing has worked. I have heard that marshmallow has broken different aspects of various phones as well. Has there been any progress?

None yet...I have 37 screenshots done over the last three days, and at different times of the day, the connection just drops.  Even when I am in an area where LTE coverage is rated "excellent."  I have heard the excuse of congestion, and network maintenance, but this all started when the device was upgraded to Marshmallow.  I have considered switching carriers, but I believe AT&T is having the same problem with their version of the v10 for the same reason, and I am not sure about Verizon.  Sprint seems like a viable choice, but the 4G LTE coverage in my town is still a work in progress.

Congestion is a possible root cause, but we'd need to look at the towers where you're connecting to make that call. Resetting the phone and removing 3rd party apps is what we suggest if something is not working immediately after updating. The next step would be collecting information from the phone (IMEI, Software number, build number) and bringing this to the manufacturer to help with a fix.

Done all that. And it was acknowledged that this was an issue with the v10 and the g5. So I guess it's time yup start working with the manufacturer.

Thanks for trying. I sent you a private message. You can get to it by using this link. https://support.t-mobile.com/inbox.‌

Just reply to that, and I'll try to get more insight about this. I can't say what the next step will be right now, but I'll have this looked into.

I called the manufacturer and we tried to resolve the issue. There suggestion was to roll back to the previous OS. Not sure if that voids my warranty. Plus that is not a solution just a work around. Any thoughts on this?

Wouldn't they have told you if it did?

I figure they would have. And I didn't really think to ask till after the fact. But really the warranty is with tmo and not LG.

I am just not having any luck with these warranty swaps...may have to consider other options. The null connection has been like that off and on for the past 36 hours.  Did a sim swap and got signal for about 3 hours, then this.

The only time I can connect most of the time is when I am near a WiFi hot spot or connected to my WiFi network at home. Tried restarts, battery pulls, safe mode restarts, and power off, then restart.  SIM swap, chat with support....no change.  I have not updated to Marshmallow because when I did that with my last 2 phones, I would lose 4g LTE connectivity and have to settle for 2g 3g or sometimes 4g.  If I wanted that, I'd go to sprint.

Congestion has been the excuse, but really, in different parts of the town where I live?

I switched to a galaxy s7, not thrilled with it, so I will wait until the defective v10 I sent back as part of the jump upgrade gets recorded, and then I will take it back and go back to a G4. It's not that the s7 is a bad phone, but I got spoiled with the large screen size of the v10, so I will try to go back to the G4 If the G4 doesn't have any issues with marshmallow, then I will be happy. Kudos to the T-mo moderators and techies that tried to help me with this problem.  I was going to get an M10, but I kinda felt like the sales rep didn't want to sell it to me. Oh well, I have 14 days.  So please t-mo, please factor in the fact that the phone was shipped ups, and will not head to texas until tuesday.

Sorry this is still giving you grief. You've done a lot to fix this yourself, so kudos to you my friend. I haven't heard anything back about this. If that changes, I'll let you know. I do hope the S7 is working well for you.

I gave up and went to the S7 edge cause  I have read on other forums that the G5 was having the same issues. Once LG fixes these bugs I'll probably go back. So far the S7 has not presented any of the issues that my LG had. I hope this gets resolved cause I loved my LG.

I think the v10 is good without the the 6.0 update.  What they should do if this is a problem that is happening with numerous v10's, is go through every line of code to see where the conflict is. I've seen this type of error with pc's where the wireless NIC would not connect after a system update, it came down to a new driver for the NIC.  Perhaps that is what it needed here, an update specific to the radio.  Just brainstorming here. tmo_mike_c.  I dunno.  Using the S7 for a couple of days and it is tough texting with my shrek like fingers, the g4 and the v10 were better for me because the bigger screen allowed for a bigger display of the keyboard. As soon as the v10 I sent back is received and processed, I am taking this s7 to a t mo store, and getting another v10.  A new one instead of a refurb.

Refurbs have a 30 point inspection done on them, but I don't see how a phone that loses a connection after one reboots it is a thing that is missed.  My first warranty swap worked well, but I was stupid and updated to 6.0.  Should have left well enough alone.

I can't say the code is what's going on here, but that's an interesting theory. We just haven't been getting a massive about of folks talking about this happening, so it's hard to say. We have to look at each one on a case by case basis when we don't have anything "official."

Oh, the struggle of having large fingers is real. Things like this are always tough for us to help with. 😊

If you do take the S7 back and swap it with a v10, keep me posted on how it's working.

I have noticed one thing with the S7.  The t-mo app won't connect.  If I want to view my account, it opens a browser instead.  Any ideas? Thanks.

Hmm. This happens when you click something within the app? Have you already tried an uninstalling and reinstalling it?

Yeah, then I get a prompt to update.  I have tried to connect both with and without the update.  I get this screen. 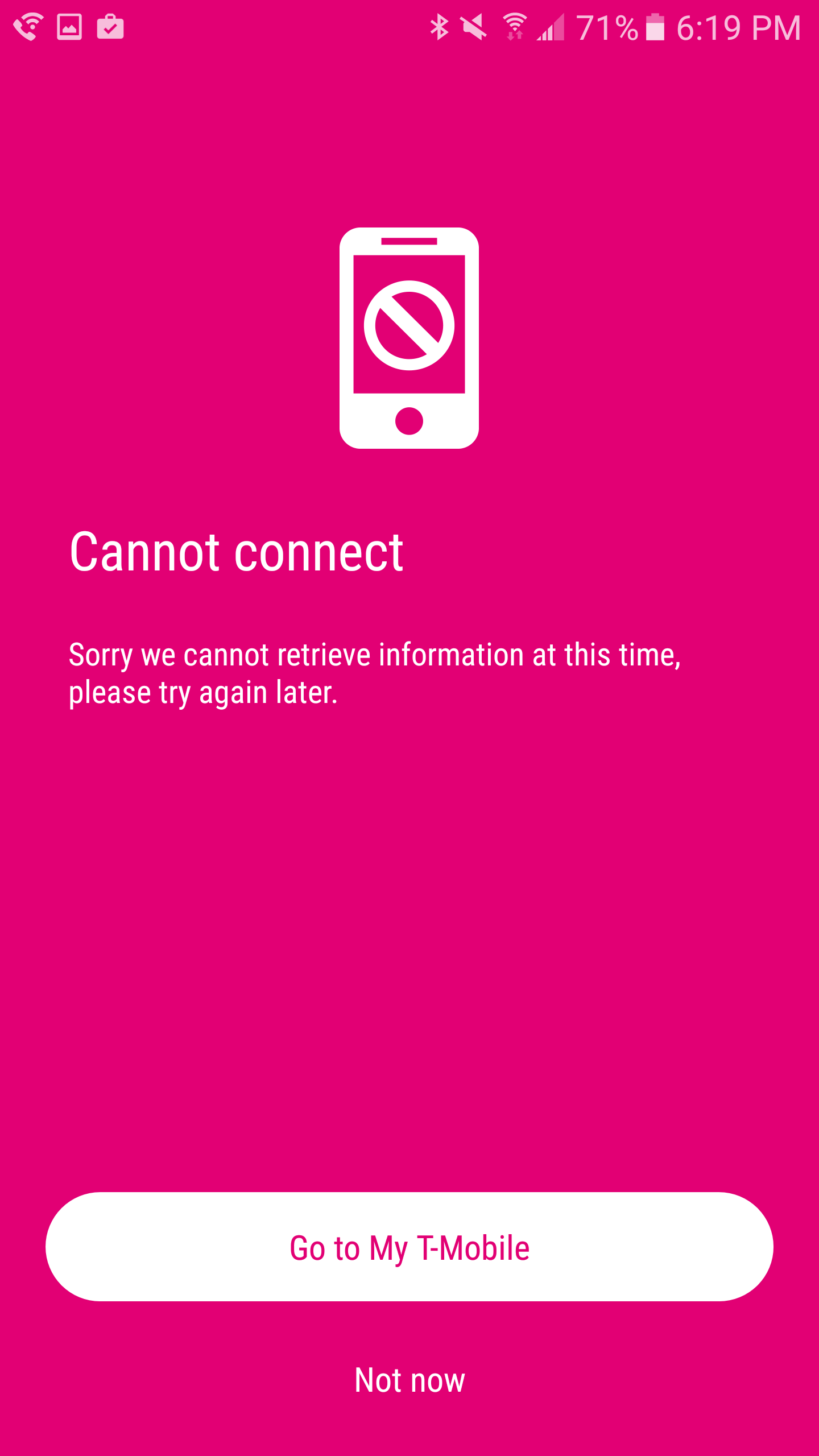 What exactly are you clicking to get this error?