Okay. So... These past few days have been very awful thanks to T-mobile, I would be lying if i say that I'm happy with the outcomes prior to the more-or-less given solution. But lets keep with the question i have:

I redid the order for my LG V20 (or to be more specific, a supervisor from Tmobile redid the order while we were talking through the phone so that i wouldn't lose the promotion i already got on the defective device i returned during my 14 days period). According to the supervisor who did the order, the phone would be arriving sometime later this month (November). Which is the reason for what i did the reorder with him. But for what i see in the website, it says that the estimated shipping date would be from 12/13/2016 to 01/03/2016, that means it is nowhere near the estimated  time given by the supervisor. Then, i proceeded to chat with a lot of agents after i realized that. And they all told me that i should keep up with the date given in the website (I agreed to do the order again because the supervisor told me that it would arrive on this month, and no later.) Yet, all this agents says otherwise....

My question is, What is going on?! The LG V20 was supposed to be out in every store of T-Mobile by October 28th, how come every single store and warehouse ran out of stock? I'm sorry but it just seems kind of stupid for such a huge carrier brand to just run out of stock if the phone is a high-performance device. The LG V20 meet up with every aspect required for an High-performance device, possibly even more than the iPhone 7, yet it is out of stock? I don't buy that. A date was given for an actual release (October 28th) yet, T-mobile cannot even keep up with the given date. Right now I'm phoneless because of you guys, because of all the troubles you caused me to do a simple replacement of a defective device. And now I'm pretty much at the end of the row of people expecting for the LG V20 and their orders to be processed and finally delivered into their homes. First you wanted to avoid my buyer's remorse rights (when i spoke with one of the many agents i spoke through the phone), then you guys lied to me by telling me that i should ship the device to an address given and that you guys would send me a new one (which if not by the supervisor, i would have sent the device away for nothing and i would have had to pay the 800+ dollars and never get the new replacement, and all my promotions gone), and now just running out of stock? get a grip of yourself T-mobile. You are supposed to be one of the biggest carriers on the United States, yet if this is how you handle things, then you are not even at the same  level of third party carriers such as lycamobile .or H2O.

My guess is that a lot of the carriers put their initial orders in with LG and LG also probably set production based on history but what none counted on was the Note 7 being pulled and cancelled altogether so a lot of Android users were scrambling to find a newer alternative rather than going back with an older device like the S7 or Note 5. I know some who have jumped to iPhone 7's (a few I know regret that).

The estimated date is based on when LG says they can ship more plus how many outstanding orders are still out there.  Hopefully LG has the capacity to see the higher than expected demand and crank production up to meet it and shorten the window.

Yeah. I hope so too. Because to be honest, this is not helping LG right now neither is helping T-mobile nor any carrier which is currently having same issue with stocks. While many people remains faithful to the order made, there are many who are or were also expecting that their devices arrive sooner, rather than later. For this reason, they decide to cancel the orders. If i hadn't try the V20 already (but sadly it was defective), i would have cancelled the order as soon as i saw the estimated time or as soon as i saw that they don't have it in stock when the release date was already past due. Also, in addition to the fact that i still have the accessories i bought for my LG V20.😥

dont sweat the promo, thats backordered too. i applied day one, all i got was approved a week ago.

but the promo of the $200 disappeared from the main screen of the LG V20 section. Also, when i was talking over the phone, agents told me that the promo is not possible anymore, some of them didn't even know what was i talking about. Regardless of that, i wouldn't mind that much if i hadn't had sent my spare phone already. Although i still remember the IMEI of the phone. Anyway, i got the supervisor to apply the promo even though it was gone since it  was T-mobile's fault anyway that i didn't get the replacement as it is supposed to be.

Also , there is a limited time to redeem the earphones, and there is no way you can redeem them if you dont have the box and the imei of the phone. So, i have to wait, and if the phone doesnt arrive prior to that due date, then i cannot get the earphones.

the headphones offer is open to all regardless of the 200 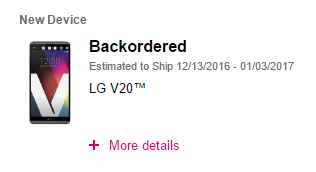 Not in my case.

if you purchased and proof of such, you got til the 20th to register promo.16 days

But that is what i mean. The estimated time for me is most likely greater than the due date to redeem the earphones. I already got the $200 promo reapplied again. But the earphones is another limited offer (limited by time)

i will check this thread in 6 days and im hopeful regardless of ESTIMATED DATE, you will have it in your hands and promo registered.

spare yourself a headache and go to chat support, and present whats told to you and what chat says,as you may have been given misinformation.

this is how busy it is in promo link in lgs site;

The server is temporarily unable to service your request due to maintenance downtime or capacity problems. Please try again later.

Dude, do you want to know with how many agents of chat support have i talked to? I have already lost count already lol. I only saved only some of the transcripts on my email because i didnt know the function was there. And i have called 611 about 17 times only the past week. (and spoke with almost every department)

ive had 2 note 7s, 2 s7edges and iphone 7 plus. i paid my dues. been through thousands of callsTHATS WITHIN 2 MONTHS.goto chat. no calls. good luck. i got my v20.you either wait, or chat.good night. it was my pleasure to attempt to help. im done.

Nope. It still shows the same. And spoke with 2 more agents online. Also sent an email to LG to add my petición to the "bulk" of messages i know the must have if the havent sent enough stock for at least 2 month, also for the camera class issue of being frágiles.

order a case ahead of time. spigen has low cost good quality. will recess camera so theres no chance of fracture. i dropped mine 3 times.still good.

i feel monday your luck will change.

Oh i had a cover i judt sold it to but a poétic case since it comes with a screen protector, also i will but a zizo screen protector that also cost 12$ and leave no halos on edges. Then again, both of them arrive in 4 or 5 days to my house, and since there is no sign of my order being actually processed not change in dates, i could say i still have plenty of time

I hate halos when I had wireless charger for note and s7.lg don't do wireless.

What's stupid is the arms length sub charge cable.lg idiots.could have made it a little longer .

Yeah the could have madre it a little longer