After updating to Oreo via the OTA release, bluetooth audio now skips/stutters constantly.  Before the update it never skipped at all.  Anyone else experiencing this yet?  Hardware/Software info:  LG V30 LG-H932 Rev.1.0 from T-mobile.  Android v 8.0.0, 4.4.78 kernel, h93320h software.   The only bluetooth audio device that I use it with (so the only I've tested with so far) is my vehicles Pioneer AVH-X2600BT head unit.

I do appreciate you coming here and keeping everyone updated . Sorry to hear things didn't work out with LG, but I do hope your replacement device works better for you.

I would encourage that anyone running into this issue at least try the back up and reset as well as test connecting with other devices. If the device is still under warranty, and a replacement is needed you should be able to get that done without any issues.

I have this same issue. It's driving me crazy. I've done two factory resets which seem to fix it for awhile but it keeps coming back. I've tried every version of clearing the bluetooth cash and data to no avail. This is a major dissapointment after waiting so long for this update.

I hear where you're coming from and I appreciate you doing those steps. Have you reached out to our Tech Care team to have them look into replacing the phone?

I am also having this issue also.  I did the clearing of all BT data and rebooting the phone.  It did not do any improvements.

I haven't yet but I'll probably need to. I was hoping a fix would come out so I wouldn't have to swap phones.

I understand. I haven't come across this being a known problem with the update. I'll reach out to see if there's more on this I can dig up.

have you also tried a backup and reset on your phone to see if that fixed it?

I was not able to wipe my phone yet. Hope to try it soon. Wird part is the BT was horrable when I posted this. Then today it only did it a few times an hour instead of about every minute.

I have tried a full factory reset twice now, to no avail. It does fix the problem but it's only temporary before it comes back. I was hoping that when the Oreo update got started again it would prompt me to update again with the new one, presumably with the issue fixed, but I haven't been able to get the update to happen and judging by the fact that it's the exact same build number as mine I don't think I'll be able to. I don't really want to go through getting a replacement phone here especially when I wont know what version the replacement will come with.

I am also noticing that I am having issues with BT devices being forgotten and I have to re-sync them.  My Fitbit has keep being reinstalled.  My wireless headset at work and my car about once every week I have to re-enter the 4 digit security code for them to sync with the phone again.

Don't know if anyone has this issue but the skipping on my handset only occurs when the screen is on.

Hopefully this is consistent with others and that there is a fix sooner than later.

I'm still doing some digging into this for other possible solutions. I haven't heard back yet, but as soon as I do, I'll keep folks posted here.

I see there was an update released on Monday to fix this.  Right now my phone and LG hub are not seeing the update available yet.  How do I push this J version to my phone?Software updates: LG V30/V30+

Hmm, that's a little odd. When you search for the update on the phone, have you tried on both Wi-Fi and the mobile network to see if it finds it?

I have tried both with out luck. 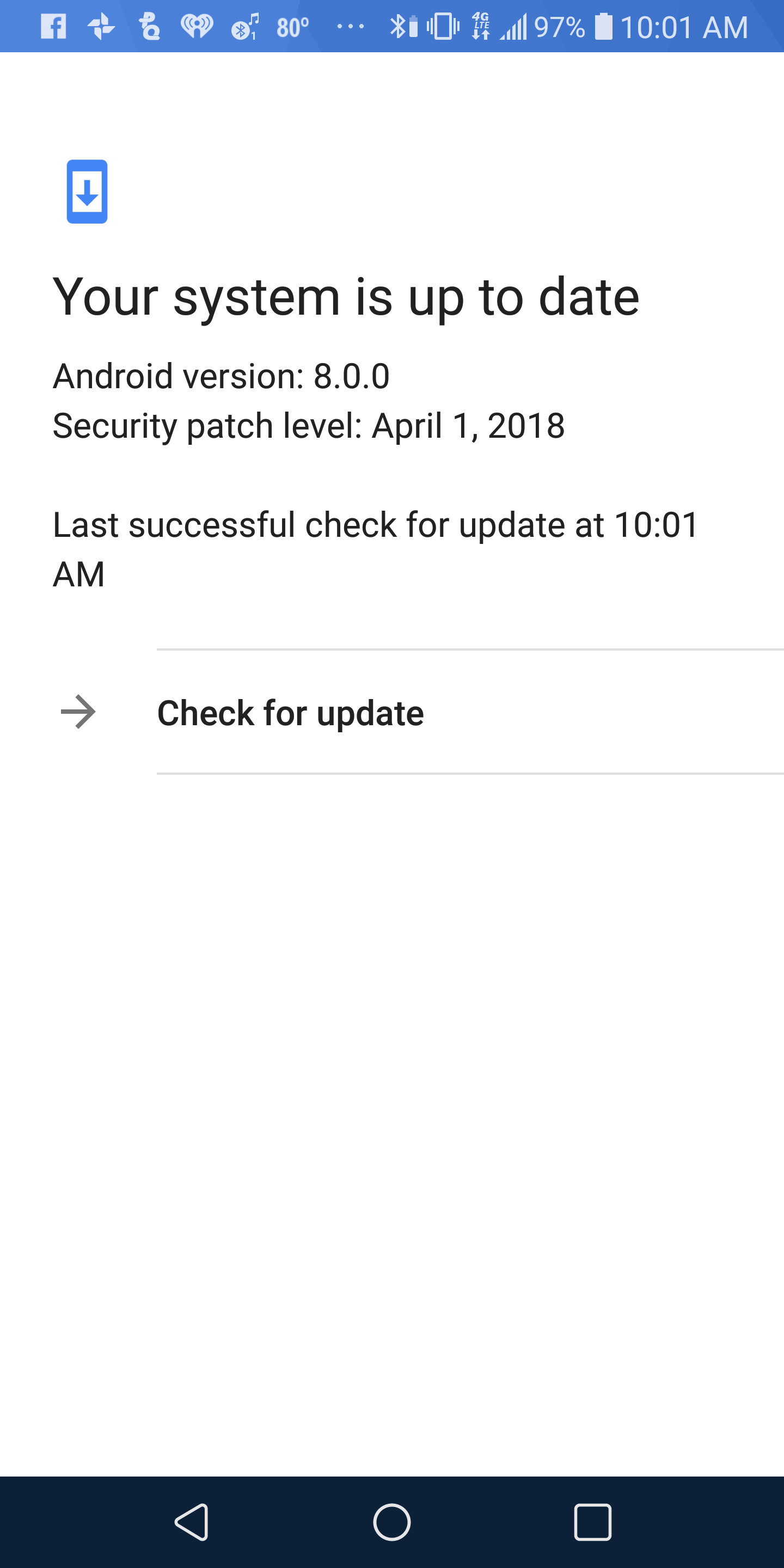 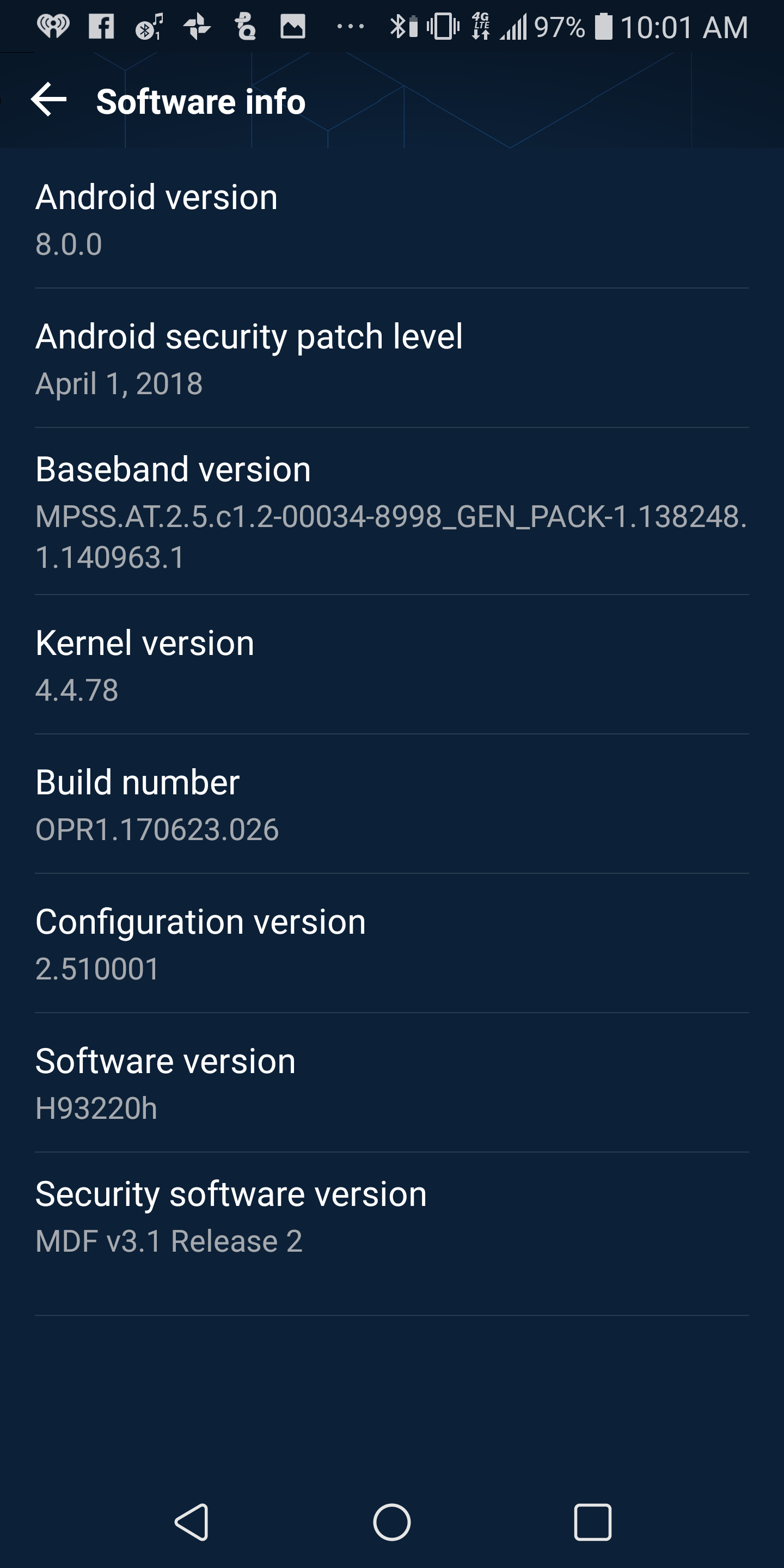 Hi, I have problems too after Oreo update.

I have the LG V30+ LG-H932 also, and have general call quality issues with normal calling with the handset right up to my ear, as well as BT calling Quality, other person's voice fades out and back in again, and generally can't carry a good conversation. So much for updating being a good thing...

Call Quality before the update has been Not a problem, no complaints from person on other end of call...

I got this phone because of band 600 mhz and now call quality is going downhill...  This is Not Good TMO...

Hey there's a daily limit of updates sent out to prevent congestion. That'll be the reason it's not giving you the option. We suggest you check daily and after July 31 the daily limit will be lifted and you'll be good to receive the update.

does this happen on every call or a few calls? Also, does your phone have strong signal when the audio is going wonky? I'm bummed this is happening but we wanna help you out with this.

This LG V30+ is getting 3 to 4 bars out of 5 and I have the TMO signal booster in my house, but other calls are out away from home in the wild totally dependent on TMOs mobile network... This happened on a handful of calls so far since I put two and two together... Never had call quality problem with this phone now I'm having it. I will update today as I travel around town...

Yeah, it's bad just had to cancel a call. The reception on BT headset was going in and out. Then I turned off BT on phone LG V30+ and used the handset right up to my head. that worked for a while and then lost that signal and had to hang up and dial back the other person...  I work at my desk at home all day on Fridays using BT and TMO phone - this isn't working...

I am un-paring the headset and just re-paired it and am trying a call to another TMO phone/person.

same thing signal going in and out both people on each end are sitting still...

Okay. Thanks for testing that out. Can you try a manual network selection and see if you can reconnect to T-Mobile?

Also, have you used other BT devices to see if the audio is any better?

ok I did the network setting.

what was the other comment tmo support also on?

I'll go out in my car and try a call from another BT headset.

NOT ready to Wipe my phone yet - just because of an update...

I've had updates from version to version on many phones and never had to reset the device...

But there's always a first!

Well installed the update last night and used BT today and still have the same issues with BT quality.  😥  This weekend going to try and get in doing a full wipe on my phone and see if that helps.

I can understand not wanting to completely reset the device. It's more a last step, but I'd like to know if your BT is working when you use another device. Were you able to test that out?

have you already reset your device? Please let us know the results. I suggest testing the BT before you add any info back to the phone. Thanks.

Hi, yes it cut out on another BT device,

I’ll try again today and this week and get back with you.

It seems like there was another update my phone went through.

I’ll get back to you