How long is this testing phase going to take? Was really hoping that you guys would beat the other carriers to the update but maybe second place isn't so bad.

Updates do not come from the carriers.  The device manufacturer is responsible for delivering all updates for their devices.  You might want to ask your question on LG's forum.

Updates do not come from the carriers.  The device manufacturer is responsible for delivering all updates for their devices.  You might want to ask your question on LG's forum.

Yes they do - or did Verizon get it earlier? The Verizon LG V40s tarted receiving  the update the 24th.

LG is Finally Pushing a Pie Update in the US: Verizon’s V40 ThinQ – Droid Life

As the article that gramps mentions, LG pushed it for Verizon.  They work on an update for one carrier at a time.

LG has already provided the update to T-Mobile, it's currently undergoing the carrier testing phase which is why the OP is asking here how long it generally takes them.

Testing doesn't have a finite time-line, it's typically based on if any issues are found, how quick the manufacturer resolves anything found, and if anything needs additional polish.

If there's no hiccups, testing is typically only a few weeks!

It seems to be ready, but it's not on the page at all right now. In your phone you can check if it's out on LG's website by clicking "more information on last update" or something along that. 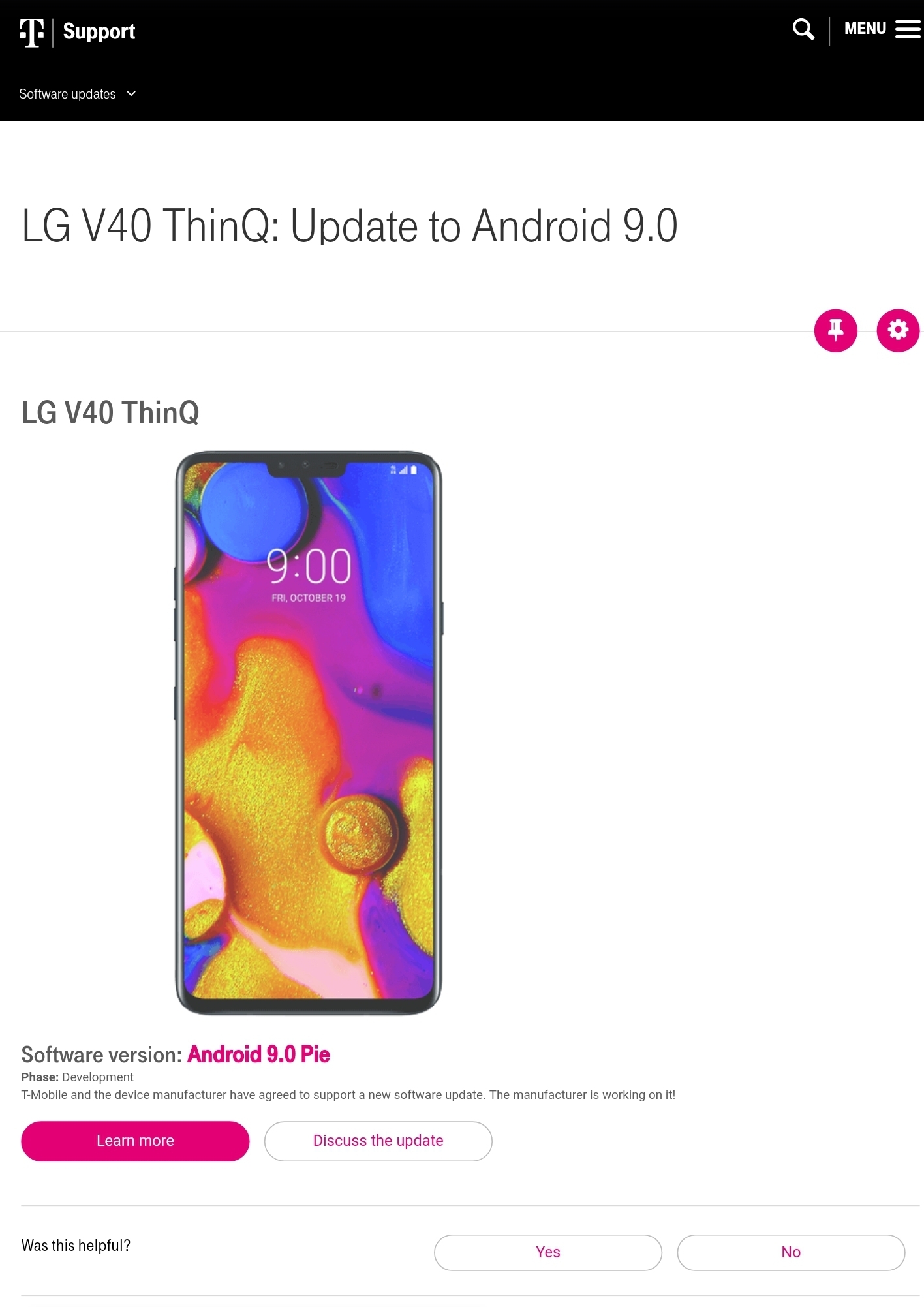 From what I read several minutes ago the V30 is to get the Pie update, too. I just got the OREO less than a month ago.

Late June or July is usually the time frame for LG's latest updates for their devices.  LG might not be anything close to first out the door with their updates, buty experience with the V30 is that thise updates came fairly bug-free and polished.  LG's UI is nice for a modified stock feel.

Syaoran - I am not a T-Mobile Employee but I could use a new job!

a couple of weeks later so I'm expecting Pie will be released  around syaoran's timeline.

Now AT&T just got the update for the V40.

Let's see how long it takes them to release from it showing up on their servers. I didn't see if the latest security update was released.

So now the unlocked version is getting the update ota, and TMobile is still in development. This is ridiculous. Does anyone at tmobile have any information at all or do you guys just get a paper that says sorry we don't know anything

Feel free to contact LG for the best answer.  Only they know when they will push the update.  They might be able to give you a guesstimate but final testing once T-Mobile bloats it out is on LG before the push.

Well now the v40 is getting Pie in all of Europe and every carrier in the US has delivered except Sprint and T Mobile.

Just got the update

Thanks for the update. I have a V30, and it's suppose to get the update, too.

Does this mean we're developers? 😀

I just got the update and it's updating right now on my T-Mobile V40.