Why didn't the Tmobile Samsung Galaxy Note 9 receive the October security update? Why are you guys so slow? and the Unlocked version also got the update for the Improved camera.

It will more than likely come out with the November patch in the near future.

There is now a 2nd update (9.0.5). The T-Mo software update page does even list this phone's firmware as in testing or even in development. I am not a software developer or engineer but I do not see why compiling the updated firmware for the unlocked phones to the carrier phone should take so long.

I am disappointed buying a new phone on the day of it's release and 2 weeks later still having outdated firmware that is missing features. I hope this Oneplus/T-Mobile partnership does not result in the kind of slow and neglected updating that I have experienced with other carrier phones in the past.

I bought a new Note 9 for the express purpose of running Linux on Dex, and now I find I can't run it because they're lagging a month behind on a security patch.  They've got 10 days to release this patch, otherwise I'll return this new phone and get one from AT&T... NOT happy at the moment.

I know the release have been coming a little later then folks would normally like. From what I've gathered, it's been additional testing being done before it's rolled out. If I get any other info, I'll share it but I know it's coming.

I went to the T-mobile software update page. There is no update listed as in development or under testing for this phone.

The update finally came out a day or two ago.

Other than Bixby - that button kills me - and the slow updates, the note 9 is a perfect phone.  So wish that Sammy stopped trying to be Google and would just play nice/partner build on apps rather than re-invent with horrible software designers.

Over a month late with no new features the patch is out.  So frustrating that we are slaves to Sanny and Tmo.

Hmm, that's strange. As mentioned before, the Oct. updates released a few days ago. Have you tried checking on Wi-Fi and the T-Mobile network to see if it comes through?

I got an update today.  Over 400 megs but no mention of camera improvements in the provided changelog.  It does have the Oct security patch (which is late) but the camera seems to be performing the same as before.  Pretty frustrating that the rest of the world seems to have gotten the camera update but not us.  Is it a problem with Snapdragon vs. Exynos? Do we just have to wait until Android Pie is pushed to our devices before we see any camera improvements? As far as I can tell the Note 9 before the update is seriously lacking in good dynamic range.

My husband got the update, and it killed his phone. Hes now waiting  for a replacement

I haven't had any issues with it.

I just installed the update today.  Now every time I get a text message it asks me if I want to enable read receipts.. I don't, but it keeps asking me.. I actually said yes once and turned it on.. Great.. But then i turned it off and it started prompting me again! WTF? Guess T-mobile is cutting the staff on quality assurance checks.

Hmm, I'm not aware of any camera issue . From what I've gathered, that update was for the October security features. What's going on with the camera exactly?

that's a pretty odd issue. Have you tried wiping the cache on the phone and testing it again to see if that helps? Also, we'll wanna make sure you're using the phone's pre-installed messaging app. 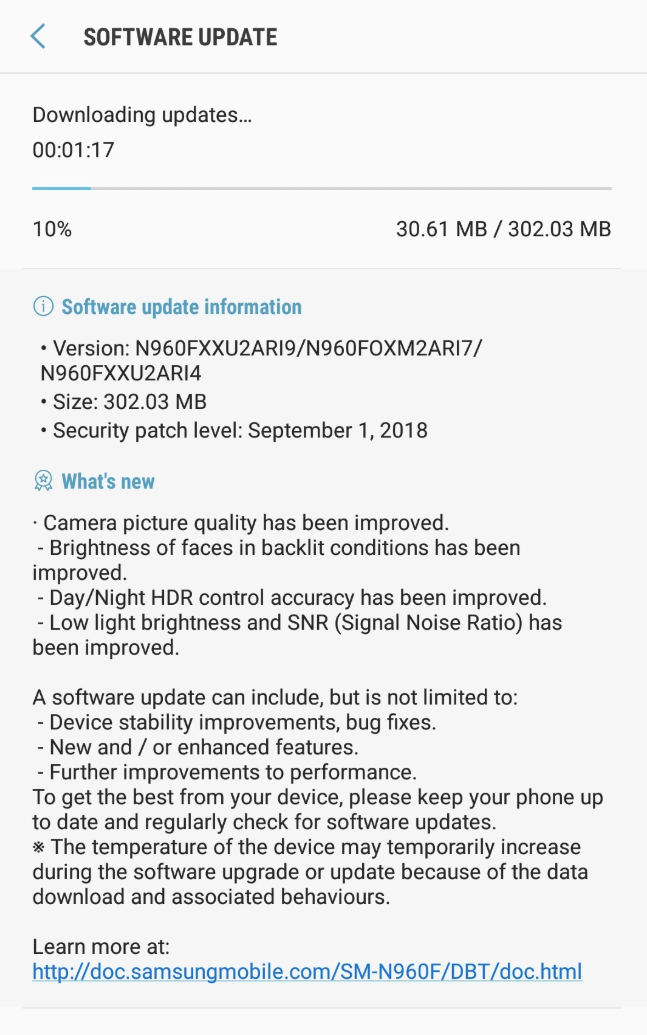 Do you see the part under "what's new" that details the improvements/fixes for the camera?  That's what I'm talking about.

I see what you mean. These look like very specific camera improvements. So, you were able to complete the update with no errors right? If so, for example, when you take photos in low light, do you still get noticeable noise? I know that might be kind of a tough question because different lighting conditions can cause different levels depending on other factors.

I don't notice better performance with HDR and low light noise.  It's anecdotal, but the pics look unchanged from before the Oct update.  It seems logical to me that if T-mobile's Oct update included the camera improvements they would be listed the same as in this other changelog.  Why wouldn't they be included in the list of what's new? Seems to me that T-mobile customers are STILL waiting for these camera improvements.

The details we give about software updates are a little more general than what's listed when you're going through the update process. For examples, our content mentions "Camera bug fixes" but it's not often we'll list more specific details as the update screen. So, the improvements do come with the update as long as you have the one listed on our software page.

Can you point me in the direction of the software page so I can check? The software version that is listed with the other (more detailed) change log I posted above does not match the version of software that I currently have installed.  Thanks.

same here to its very annoying!

new update about an hour ago, guys and gals

At T-Mobile, our customer's privacy and security is incredibly important. We pride ourselves on making sure your mobile experience is safe and secure. It is strongly recommended that you install this security patch to protect your device.
This will not consume your data.  Please charge your device,  do not turn off the device while the update is installing. During installation you cannot use your device at all, even to dial 9-1-1.

What is the build number of the update?