With Pie hitting most phones, we want to hear your feedback and we’ve made an Official Discussion Thread to make the most of the update. Start by checking out our Android 9.0 Pie software overview for some interesting info on the latest OS! Still have questions, thoughts, or feedback? Reply below and tell us what’s on your mind. Thanks!

You know what the most annoying thing in the world is?? Galaxy S8 S8+ Note 8, as well as the entire 9 series all has android Pie but the Galaxy S8 Active which literally the same damn phone as the rest of the 8 series just a different form factor still doesnt have it.. it makes no sense.. it would be nice if someone from higher up could tell em what is really going on cause this is BS.

Thanks for the specifics . Have you tested the service in other places to make sure it's not a specific area giving you trouble. There's a chance you'll need to reset the device, but you could try testing the SIM in another phone to see if the SIM needs to be replaced first.

I hear your concerns and I do work with our software developer contacts. This feedback has been passed to them. I can't guarantee when the software will be available as it's in development. These time frames can vary even among the same manufacturers. Thanks for posting.

I mean what do you mean test? I still use my phone I just noticed the service changed for the worse at least in my house. I don't have another phone to put my sim into.

Glad to see I'm not alone.. they jacked up their unlimited LTE hotspot price and then lowered our speeds here un wallisville.. I'm bout to switch because the service went back to how it all was in 2009 before John Legere it's just depressing and then you call em and they say some BS like well average LTE speed is 4 megabits per second.. and you should consider yourself lucky your getting 10... like wtf? DSL  is faster.. I used to get 60 MEGABITS TMOBILE AND all I've done is talk you guys up and got customers to join and now my tower is broke and I cant even get a straight answer

I'm asking if you've used the phone any other places instead of  your house. We'd just like to make sure the issue isn't location specific.

Just got the update on my unlocked A6 last week, and i already hate it. My main issue is the behavior of WiFi calling now.

I work on a cruise ship, and seeing that WiFi indicator on my status bar (and T-Mobile on the lock screen) was the difference between unlimited calls/texts and $5.99/minute calls and 50¢/each sent texts. Now that the indicator has been removed (by Google? Samsung? T-Mobile since some people on the net with unlocked phones from other carriers state it's still there for them?) from the status bar, there is no absolute way to know that I'm on WiFi without making a call, and by then, if it isn't, it's too late. Turning on airplane mode, then turning WiFi back on and making a call *seemed* to work (we'll find out when the bill comes for my Father's Day call, lol), but on Oreo T-Mobile showed as my network on my lock screen ALL THE TIME when "WiFi only" was selected, so i knew for sure. Last month i paid an extra $5 bucks on my bill because i was sending texts and forgot to look for the indicator--that was completely on me. But I know if I'm making a call and it even RINGS using Cellular at Sea instead of WiFi, in spite of my best efforts, I'm on the hook for $5.99.

It also doesn't help that when i do use mobile data but turn off WiFi itself, the wifi calling doesn't automatically switch off, and the wifi signal arcs still show up on the dialer screen. A drag down of the notification bar says I'm ONLY connected to Cellular at Sea, and I can't even manually change to TMo in network settings.

(And let's not even get into how starting around 6 a.m. in my first American port since the upgrade, I was CONSTANTLY awakened by the sound notification as it switched in and out of cellular preferred/WiFi preferred every time the T-Mobile signal randomly showed up vs. this island's other cell service. I shut the sound off, but even with the crappy TMo reception in my cabin at the moment, it INSISTS on switching back to "cellular preferred.")

That's no good. Have you tried any troubleshooting on the phone to see if that helps with the Wi-Fi? For example, wiping the cache can definitely help. You may need to reset the device, but that's a last resort.

Why isn't tmobile rolling out latest Note 9 security updates? Everyone else is getting it.

What's up with the update for the G7 Thinq? Last time I asked a rep, they told me to ask the manufacturer, which doesn't make a lot of sense to me, since T-Mobile is the one that's supposed to roll out the update to me, not LG. Are we getting the update at all? We were promised to get it since the phone was released last year.

Nope!  The rep was right!

If it was a decade ago, you would be right but a lot of time has passed and manufacturers got fed up with carriers boring their phones a long time ago.  The manufacturer of the device is responsible for the final testing and rollout of any update for their device.

Syaoran - I am not a T-Mobile Employee but I could use a new job!
A

Do any of you know when is the Night Mode update coming to the Note 9 on Tmobile? International Note 9 got the update last month.

When Samsung has the update finished and pushes it out to devices.

Have the LG v40 just go the update. When battery saver is turned on to extended mode, my phone keeps dropping cell connection, goes to little x next to bars then reconnects happens over and over again till I turn off battery saver. very annoying please fix. Thanks

Battery Saver is working as intended.  Using extended will reduce the power to the radio.

Syaoran - I am not a T-Mobile Employee but I could use a new job!
T

Nobody will say anything but give excuses to why and of course nobody knows anything.

Google's developer list of supported handsets for Pie first showed the LG V20 early 2019 - late, but finally there. Good sign LG was doing something. Then finally the South Korea rollout 10/2019.

Android phones should get two updates, not necessarily the '2 years' often cited by TMO support - especially on a former flagship. Galaxies and other even entry level, no-contract phones got 2nd upgrades I mean YEARS after they came out.

TMO does not make it easy for existing customers - even/especially like me with 10 lines - to buy a new phone at any discount, so it's ultimately a real investment. The reason so far that I have passed on your V40 and now V60 is because I cannot count on their upgrade paths with you guys, based on my experience with the V20. I'm begging, don't want to buy a Samsung!

Please, get the signature upstairs there at tmo, the reluctant ok from LG, put 3-4 good people on this for a week and get Pie going for V20 asap.

Do this on a widely deployed phone (extremely popular with geeks in the know!) when no other US carrier did, and it will be a win for you as we all choose our next device and 5G network over the coming year or two.  Thx

Oh yeah, and just a nod to all you 'what happened to my data speeds?!' folks, here's my favorite. And yup, on my trusty V20, not that long ago. Haven't seen this performance since the merger action started getting serious last year (not saying it's related, I'm just sayin') 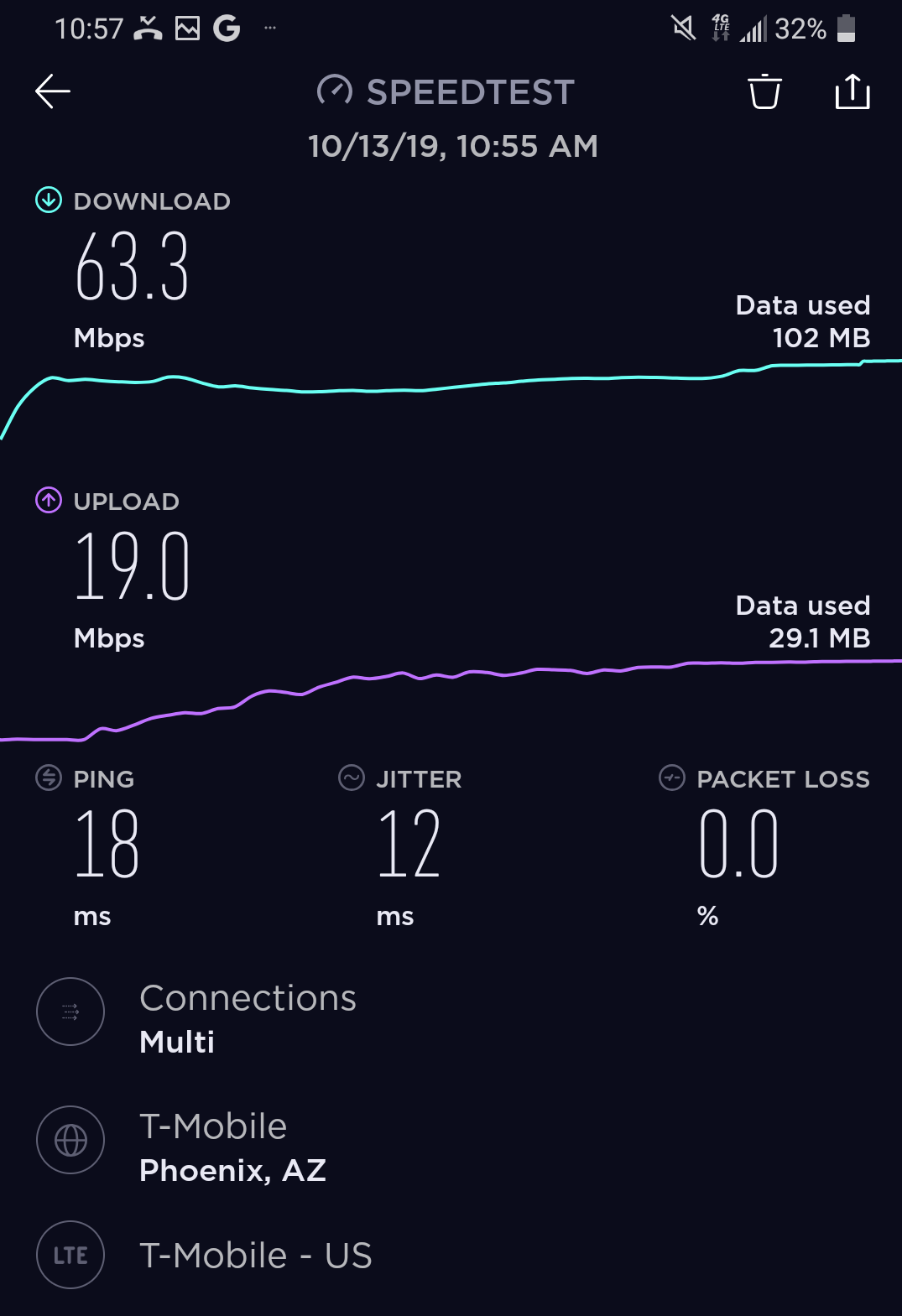 Are you going to help us out Tmobile?

Coinciding with the recent LG IMS crashing glitch on my LG V20, will T-Mobile be releasing a 9 Pi update?  I really love my Titan, as it was the last “flagship” phone with a removable battery to be released.  It only got 1 major update.  9 was released for the V20 in S. Korea, so it can be done.  The question is, will T-Mobile do it too?  I know I’m not the only one that still uses the V20.  This glitch across LG phones could be a great opportunity for a serious update rather than just a patch.  Please T-Mobile, do this.

the OEM is the one that decides if it’ll get an update or not..as is LG is no longer in the phone game so i highly doubt they’ll be adding any additional people to work on the American variant of 9.

***I like many others come onto this site for assistance and to help others. Marking a reply as helpful or correct helps others with like issues when they try to search the site for assistance. I do not work for Tmobile and my suggestions and or opinions are my own**.~~~~ The site here is primarily peer to peer with some TMO moderation to keep the site in order..They do not have account access..The prefered method would be to contact TMO through either calling in (tier 1 support) or by contacting them through either Facebook/Twitter (tier 2 support)**~~~~
Page 10 / 10