Unlocked variant already received an update: stability and fingerprint improvement. Just wondering if we'll ever get it ?

Hey folks! I know how important it is to receive timely updates and you can rest assured we will do everything we can to get these to you. When rolling out updates, we do want to make sure that there are no adverse effects of the update with how the device performs on our network since we now sell and directly support the device when purchased through us.

OnePlus is already up to 9.0.5 version, which means our phones are 5 updates behind already. Besides stability fixes it also updates camera for better night shots! ALL MAJOR CHANGES / FIXES.  Which is why most of us purchased the oneplus, their reputation for quick constant updates.

Welcome to the wonderful world of (un)carrier phones.  Never go with a carrier android phone if you want timely updates, security or fixes.  I get what you're saying, we are actually 2 updates behind the normal phone and 2 months behind on security updates.  This is not a normal OnePlus device.

And definitely not the "(UN) CARRIER" way of doing business .

But I guess the bigger you get the "dumb and dumber" you become.

Should have purchased the phone through OnePlus

Definitely purchase directly from OnePlus if you weren't able to take advantage of the $300 trade in offer.  That was the only reason for me going with a T-mobile OnePlus phone, $300 for a Nexus 6 is well worth jumping through the upgrade/update hoops of T-mobile.  It's still a pretty nice phone.

Yeah if I had the cash and knew then, yes I should have known, but was

hoping differently, what I know now, I would have went directly with

Hey folks! I know how important it is to receive timely updates and you can rest assured we will do everything we can to get these to you. When rolling out updates, we do want to make sure that there are no adverse effects of the update with how the device performs on our network since we now sell and directly support the device when purchased through us.

I don't see what you called timely updates, we are 3 updates behind. That is not timely .

You were still using a Nexus 6? About a year after I got my Nexus 6 I switch to project fi which was around October of 2015. In September of 2017 I went back to TMobile. My phone a Nexus 6 got the security update for October and started having problems. Because I left TMobile my warranty was cancelled. I checked with T-Mobile on getting a replacement Nexus 6 but learned they hadn't any since around 2016.

I went with an lg G6 (horrible horrible phone) major step down from the Nexus 6.last week I said goodbye to my LG G6 and moved on. After looking at various phones I decided to go with the OnePlus 6T. Even though it didn't have a headphone jack. After checking it out at a T-Mobile store I liked the feel of it, the specs I was very impressed. When the agent I was dealing with went to fetch one turned out the store had sold out and there was a back order. So while I wanted the OnePlus 6T I ended with the E5 plus.

Not a good example of "timely".

Is there a beta testing program yet?

When will we get an update???? 9.07 is already out.  When i purchased this phone i was under the impression that we would get faster updates????

I asked them the same question 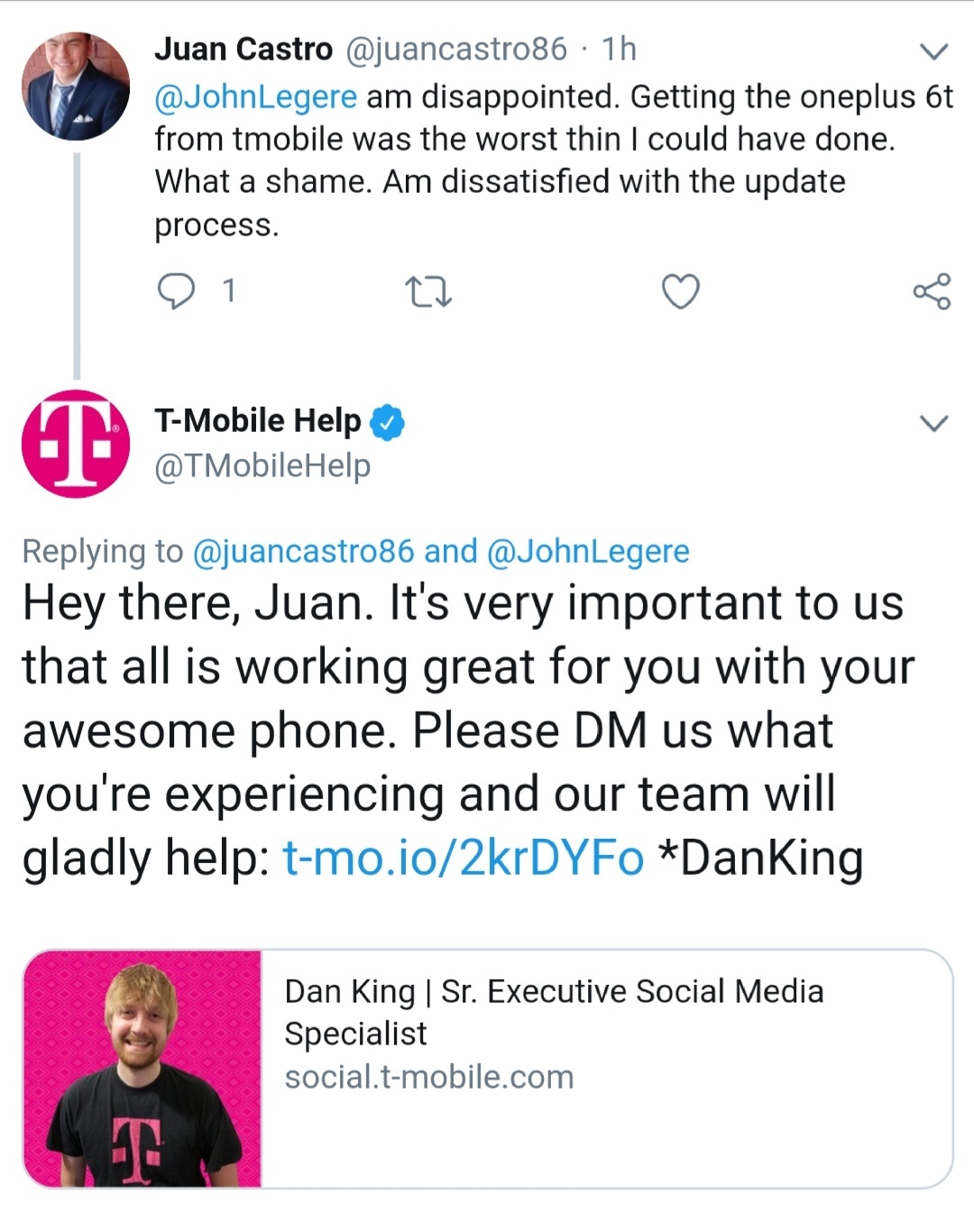 I knew they would be slower then OnePlus but a month behind is ridiculous.

What is the deal with the updates? I came from an iPhone and never had this issue. Everyone got the updates on the same day it was release. I don't see anywhere in the paperwork when I bought the phone that I wouldn't get the latest software updates???

No, I was not still using a Nexus 6.  It was in a box collecting dust for quite some time now, since they stopped updating it in Oct. 2016.

Motorola E5 plus?  That's quite a step down from the OnePlus 6T, price included.

This is unacceptable! Allow the power users to decide if we want to test updates or not. A lot of us purchased this phone because of OnePlus reputation with REAL TIMELY UPDATES! They are now on 9.0.7 with a bunch of improvements. By time you all "TEST THE UPDATE" we will be behind even more.

You didn't even allow us to keep the manual update option so that the software developers can let us test updates. Absolute let down.

Really?  It seems no matter how long T-Mobile takes to release updates, adverse effects still happen.  Follow the Visual Voicemail thread here and on the OnePlus community forums.  People still can't get VVM working.  Might as well release the updates when OnePlus releases the updates.  I know that is not the only thing T-Mobile needs to make sure of, but the standard replies of making sure there are no adverse effects is getting tired.  I like the suggestions to allow people to beta test and to be on the same software version as a real OnePlus phone.

You know what is utterly ridiculous and sad? I was told by two different T-Mobile representatives that software updates were delivered "straight from the manufacturer." Really T-Mobile? Straight from the manufacturer? Yet we are still on 9.0 while any 6T purchased from OnePlus directly is already on 9.0.7. I should have known better than to purchase my device from T-Mobile. Lesson learned, never buying a device from T-Mobile again. Best thing anyone can do is pay off their phone ASAP, get the unlock code, then flash the stock software from OnePlus itself so you'll always have the latest software updates.

Hello I am just wondering when the features that were available on the launch will be available? The google assistant thru the power button is very useful when using gestures, but not available.This phone has been great and I know it has only been a month,but already 3 updates behind and counting. Wouldn't it be more efficient to let updates come directly from oneplus and sort the bugs out later. I mean there is always problems. Let the people get the update and suffer until a solution.

Hey T-Mobile, here is an issue about timely updates.  I just received my OnePlus 6T from T-mobile just after switching to T-Mobile from V!   I also use TILE; the little key fob thing you can put on your keys or in your wallet so you can find them with your phone.  Turns out that specifically, the OnePlus 6 and 6T have a bug in their  Bluetooth firmware that prevents the TILES from communicating with these specific phones. (It's on Tile's forum)

OnePLus has heard about this and FIXED IT and it's part of the software update they are pushing out as of December 2nd.  So, will I see that update before I lose my keys?   Will I see the update before Christmas?  Tile makes a great stocking stuffer. Please note that this is all handled by OnePlus'  Oxegen OS update, not an Android update.

I have to say how disappointed I am with how long it is taking T-Mobile to roll out an up date on a flagship phone.

I have been with T-Mobile going on 8yrs. After working in the software industry for almost 10yrs, with some of that

being in the cellphone sector. I know it isn't that hard nor take that long to add existing software from two parties, compile

it test it for bugs address an issues, fix the bugs then roll it out for release.

Come on T-Mobile, what's the hold up?

Any update on this? We have 5 oneplus 6T in our family with a bunch of tile pros.....This is frustrating

Exactly what they told me but it make no sense!! And they wouldn't give me no ETA other than they are working on it or it will come soon.