On the google visual voicemail it is having troubles activating

- Cleared the cache and storage of the T-Mobile voicemail app 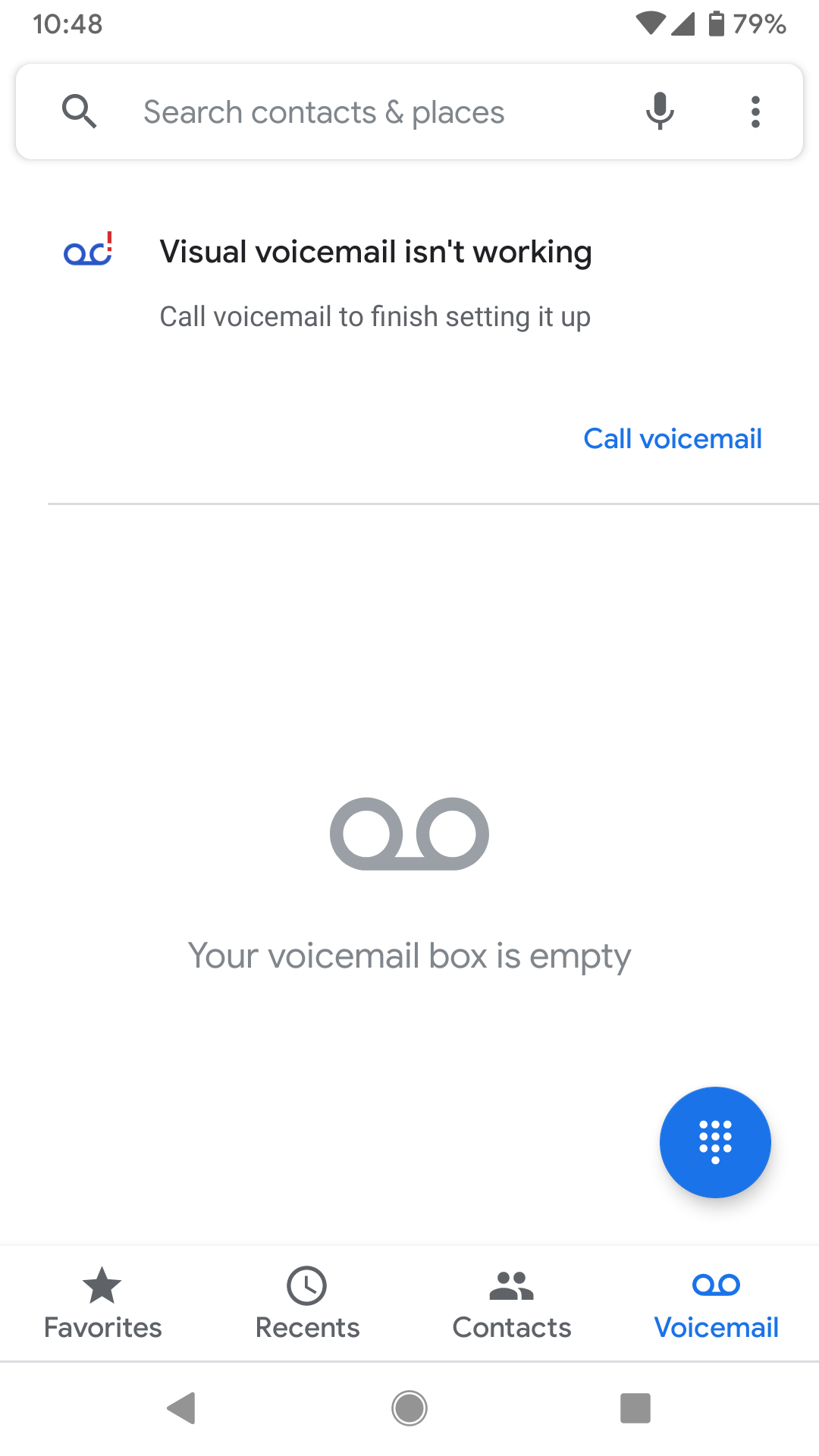 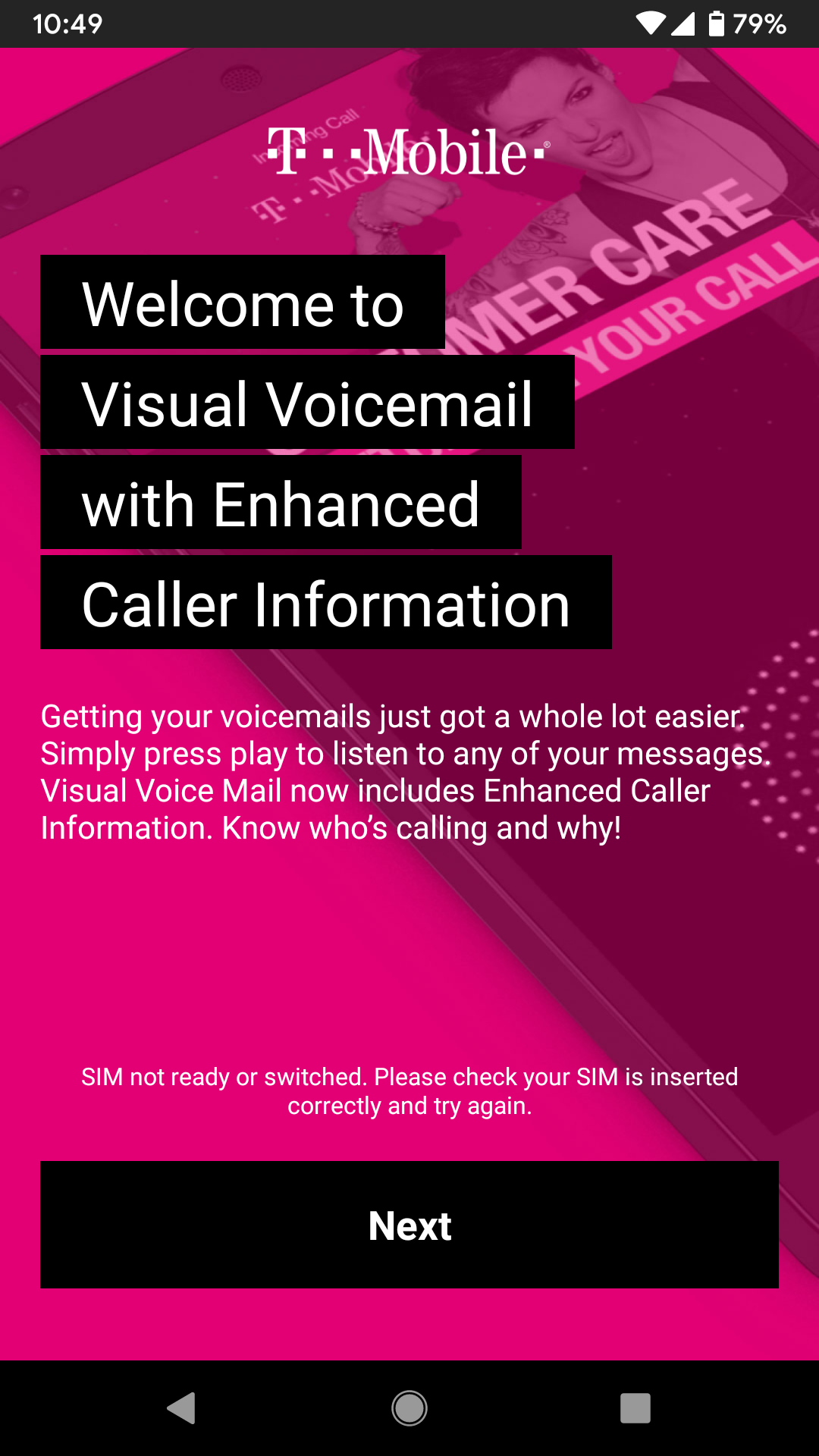 The problem is with both the "native" Google voicemail & TMobile. I have uninstalled/reinstalled TMobile app least 15 times now.

I suggest not reinstalling the T-Mobile app. if you continue to have issues with the native dialer app voicemail tab or you just want to use the T-Mobile app and it still doesn't work you'll need to contact customer support to make sure there's not an issue with voicemail on your line.

Having used an unlocked Moto X4 as well as a global OnePlus 6t I have not had a problem using the native voice mail.

I have the same problem on my essential phone. Can't activate the Google visual voicemail or the T-MOBILE one. I get the same sim card error. TMobile support didn't know much and just gave me generic fixes which did nothing. This happened yesterday. It was working fine ever since. It's very strange. Right around when I started receiving the transcripts of the voicemails.

Also have the same problem that just started in the past few days. Never had the T-Mobile visual voicemail app and was always using the native Google service.

Same exact issue. Native dialer had no problems with visual voicemail until within the last few days. Unlocked Razer Phone 2.

Ditto here.  Three of us with Razer Phone 2's.  All worked fine until one day I get a pop up about installing T Mobile's vvm app.  None have worked since that day.  Instead of TMobile fixing the issue (probably need to update a config on their end) they just try and tell you to buy a phone from them.  Great support!  NOT!  Their signal was so terrible I finally bought a new phone that supported wifi calling so I could avoid using their network.  I refuse to go to their vvm app so I can get their ads and they can try to milk me for money.  If they can't make the simple native android phone app work, then they are just going to keep losing customers.  I will be shopping around this weekend for a new carrier who actually cares about their customers.  I'd rather sign a contract with a carrier who gives a sh** instead of staying with this joke of a company.  It's just BS they can't get this to work.  They aren't trying because they want you to download their buggy piece of junk vvm app.

I had this problem for a few days. Eventually, today 6/30/19, my visual VM stopped working completely. The only way to retrieve my voicemails was to do it old school and call the number and listen to all voicemails one by one. I then read this post, deleted the T-mobile app, 5 min later chatted with a rep. and the issue fixed "by itself" (@8:45PM ET) I asked the rep if he did something, but he said he was just checking my account.

So the issue got resolved either b/c I uninstalled the app (for good) or b/c tmobile pushed the fixed coincidentally. Now, I am able to use the google native visual voicemail as I always was able to do it.

Hope this helps to anyone out there.

You are stuck with TMobile Voicemail or a 3rd party app voicemail from Google play..