I got S9+ from t-mobile on monthly plan. A month ago I paid up the full amount as I am planning to travel overseas for a month. I tried unlock app on the phone, but it did not work. Tried other carrier SIM, but that did not work either. T-mobile customer support asked me to factory reset and try UNLOCK app. The app failed - message 'unlock failed'. When I check IMIE # on Verizon and at&t website, it says not compatible with their network. Technical support asked to do factory reset and then try unlock. Nothing worked.

Made numeorus call to t-mobile support, result zero. I am to go overseas next week - not sure what I would do with a locked phone.

It takes 40 days on a postpaid account to permently unlock the phone. Did you try temporary unlock from the app?

Also it takes a year or $100 in refills to permently unlock the phone using a prepaid plan.

Went to a T-mobile store. Rep tried to unlock and did not work - he contacted tech support. I was told the same thing, a 40 day wait period. But after coming home and contacting t-mobile over the phone, phone, they are saying there is no such requirement, since phone is completely paid off.

Anyway, I tried temp lock, but that also gives the same error message "Unlocked fail". I hope 40 days wait time is really the reason, as it going to be over by this Friday.

Even after 40 days ( from full payment for the device ), not able to unlock. Earlier, when contacted over the phone, I was told that the phone is already unlocked.

Now I am told, they see the phone as locked. Asking me to do the unlock process again. As per the customer support, no need to wait for 40 days.

The IMEI # is not available in database of all other carriers ( Verizon, AT&T, Sprint ), suggesting that the the phone is still LOCKED. T-mobile customer team has no idea or a clue about the how IMEI#s are used in any carrier systems. Tiring and frustrating - have given up. Looking for a new carrier now.

Unfortunately the rep doesn't know squat about the unlock policy.

Unlock eligibility for phones, tablets, and mobile Internet devices on Postpaid plans like T-Mobile ONE

Ouch!  I hate that you were given incorrect information by a rep, but the policy clearly states a 40 day usage requirement.  As in, the device has to be activated on a T-Mobile line of service and in use for at least 40 days.

What exactly is the app telling you?  Is there an active T-Mobile SIM in the phone while you are attempting to run the unlock app?  How about your account? Is it in good standing (no payment arrangements or extended payment schedules)?

The IMEI checks that you are running from other carriers check for BLOCKS (for a lost or stolen device) or if the device is still being financed.  I can type my own IMEI into the T-Mobile checker and it says it's not eligible because I'm still making payments.  It does not indicate if the phone is still carrier locked.

I was told repeatedly that my device is unlocked in the system. But today rep is seeing the device as locked in t-mobile system. Clearly something is wrong. I am being asked to run the unlock process once again, but the app is not there. Is there a way you can send a link on the phone to get unlock app?

When I look on the web in my account it shows as unlocked.

Oh, dear! I flagged your post to have the IMEI blanked out, we definitely don't want that floating around out there, just in case.

Thank you for providing more information.  The app will automatically uninstall itself after the unlock is successful, it's not able to be downloaded again from the Play Store.  What happens when you insert a SIM from another carrier?  If the phone is indeed locked still, the phone will display a SIM-specific error regarding compatibility.

T-Mobile's system may not be completely up to date regarding your lock status, the only reason I can fathom that they are able to tell you that it is still locked.

When inserted Verizon sim - it didn’t work. Don’t remember what it said. Will try with a friends sim and see.

Why this imei # does not show up ( recognize ) on Verizon and at&t websites ? You can try it on the web. Why this imei number is still kind of blocked for other carriers? Device is fully paid.

On other carrier website, it’s showing device is not compatible

Without knowing too much about the other carriers, I'm willing to bet the IMEI checkers may also compare the available bands to check for compatibility with their respective networks.  If you try the AT&T checker, it says the device is compatible.  Sprint only says that it can't be activated online.

Do check with a different SIM and let us know what error you receive, I'd love to help you get to the bottom of this mystery!

It doesn’t say that the device is compatible

Same is the case with Verizon

Try on the above link. 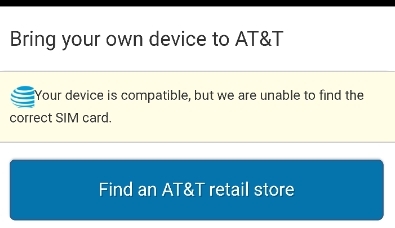 We are checking here IMEI# at AT&T website  (Bring your own device )  ( You are checking Make and Model, not my device - by entering imei# )

On entering imei#  - receiving this message

Bring Your Own Phone or Device - BYOD | Verizon Wireless 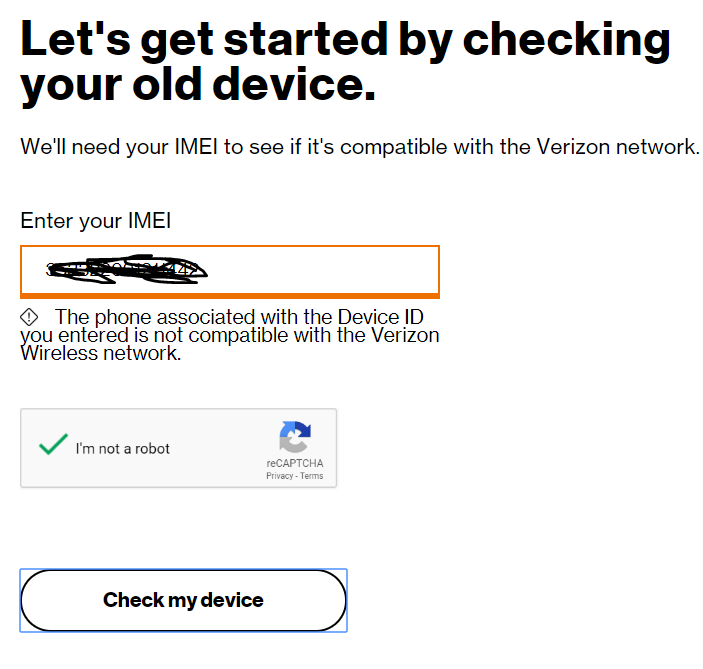 Why my imei# shows still blocked on other carriers sites? It has been fully paid.

Oh, no, the screenshot I posted is with using your IMEI, I grabbed it before the mod blocked it out so I could check it on the other carrier's websites and IMEI.info.  (Don't worry, I'm quite trustworthy and have no malicious intentions with your number!) I can assure you, the issues you're seeing on the other websites have nothing to do with your device being locked or unlocked.  It just doesn't make sense. The check is just that- a check to see if the phone has been blacklisted as lost or stolen or if there is a balance.  They can't expect you to already have an unlocked phone before you initiate service with them.  Furthermore, though it pains me to say this, T-Mobile's contemporary software for accessing accounts is notoriously slow when it comes to updating device, IMEI, and unlock info.  So, if a T-Mobile rep says the phone is still locked, there is a possibility that they simply don't have updated information.  They can utilize a manual system to update the IMEI, but it still takes a while to show up in their system.

Did you try popping in the other carrier's SIM? Did you get the SIM not compatible message?

Hi - now since phone was not unlocked and not working on other carriers SIM, my family members have left t-Mobile, leaving this locked phone with me.

Got a message registering on Verizon - after lot of spinning, received message that Failed to register the device )

1) Device Unlock app is STILL THERE on the phone

3) turning ON the device without ANY SIM, see t-Mobile logo briefly on startup screen.

Doesnot that indicate that the Phone is still LOCKED?

Or Does that indicate that the Device Imei# is Blocked/blacklisted/unpaid device on T-Mobile?

to request the unlock code since the app won't work.

PHONE IS CONNECTED TO THE NETWORK.

Still I have two lines on me

So I am using that phone,(s(9+ ) I have inserted my SIM  (t-mobile ) and it works. The question is about unlocking the phone.

IS IMEI# BLOCKED   OR IS THE PHONE LOCKED.

( Not sure how do you come with this logic - phone is not connected to the network).

work on another network.

If it doesn't work on Tmobile then it's blocked.

So, how to UNLOCK it? Why UNLOCK app is not working?

Can you please go over the entire conversation on this subject, instead of randomly typing meaningless sentences?

Please let me know if you can fix this unlock/lock issue? I can send this phone to your S/W tech dept or to your retail store to get this issue fixed. I have spend countless hours on phone talking to your team - and spent hours doing the same repeating process on the phone.

Please let me know if you can get the issue fixed?  I have no appetite to deal with the issue, would like to cut my losses and move on to some other carrier.