The Apple iPhone 11, iPhone 11 Pro, iPhone 11 Pro Max, and Apple Watch Series 5 ​are now available for purchase. This is the best place to chat with the few, the proud, the insanely stoked about the next generation of iPhones. The answers to some of your questions about deals, how to order, shipping and much more are available in our Apple Pre-order FAQs.

Still have questions? Need more information? Any concerns? Our Community Managers are standing by! Log in and ask away!

Just got the email, ETA tomorrow.

Mine too!!! All those worries for nothing. Now we can all stalk UPS tomorrow. (:

Be aware that you probably need to be home as I remember signatures being required for delivery unless thats changed.

I sent my phone to my work address and my office is not open on weekends. Will my phone come on 9/20 or after?

I finally got my info! My device will be delivered tomorrow!! 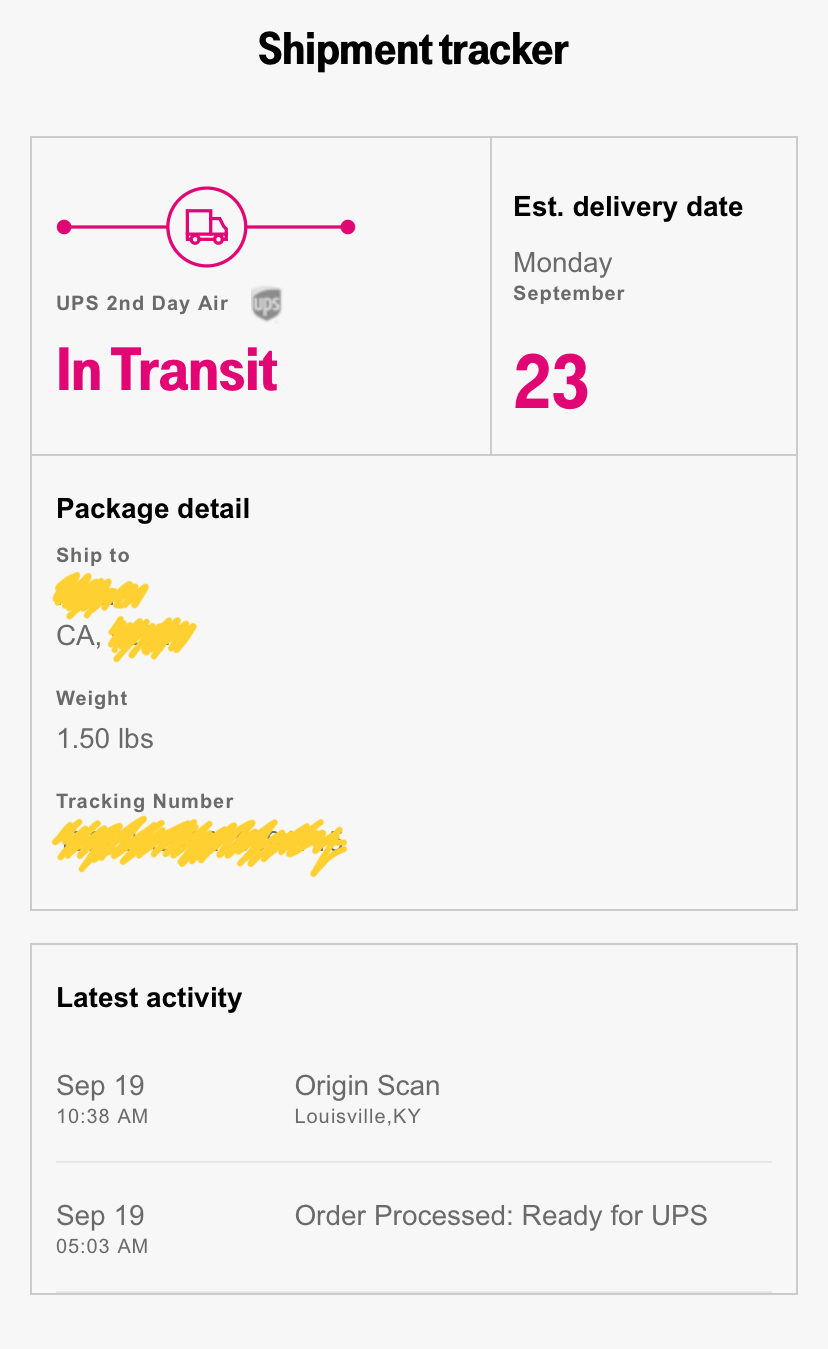 I know everybody is concerned with when your phone will be shipping but this is the exact same drill every year.  If you look at last years thread or the previous years launch threads you’ll see an answer to every question you have. These threads feel like deja vu because the questions and concerns are identical.  The responses from T-mobile will be identical because the process doesn’t change. It doesn’t matter if your card was charged Sunday or today, your phone will arrive at the same time. It doesn’t matter if you paid for next day or got free shipping, your phone will arrive on the same day.  Even if you don’t get an email there’s a good chance your phone arrives tomorrow.  They’re not delivering to your job this weekend so don’t worry about that. Don’t be upset because one person ordered a different phone than you and theirs ships first.  It goes by the supply of your identical phone. I know everyone is excited about their new phones but you’re all worrying about nothing.  It’s too early to be concerned about anything.  If you doubt anything I’ve said feel free to look at last years thread or any other years thread.  Stop worrying, checking and calling UPS and T-mobile and enjoy this time with your family, coworkers, dogs or bartender.  Enjoy your day and your new phones!

I have been attempting to pre-order the iPhone 11 Black 126 gb for over 24h now but each time I am about to complete the payment process as soon as it is about to charge it says "Oops! Looks like we've hit a snag!" I was able to patch through a CSR but they took over an hour to respond and during my last attempt, as soon as they were going to charge the payment the guy hits me with "looks like there was an error." And wasn't able to help me. Is there any way I can successfully process this purchase through my carrier (you guys) or should I wait a few weeks to see if the site is back up...? Is there any solution to this?

I am not seeing any outstanding payment issues on my side. Are you able to try a different form of payment?

I am using the same card T-Mobile bills me from automatically, which is the card I would like this charged monthly.

The message is (Copy & Pasted)

OOPS! WE HIT A SNAG

The page did not load for some reason, but you are still on track

But it continues to re-direct me to the very beginning of the process. Very frustrating.

Thanks for clarifying ​. When you ended the call with the representative earlier, was there any additional explanation given as to why they could not place the order? It seems rather odd to me that the call would end with no resolution or next steps as we always make every attempt to find a solution.

Mine too, I think those Mid Night Green 256GB ones are the delayed ones

The Apple Watch series 3 is lowered to 199$ on Apple’s website . i was wondering if the Series 3 - Series 4 , will be marked down in price Anytime soon ?

Pre-ordered the iPhone 11 with a trade in of my current iPhone 8+.

My return shows that I have to send in the old phone within 30 days of return authorization (9/17) but the new phone isn't scheduled for delivery until 10/2-10/25.

The return instructions aren't really clear - do I need to send my current phone in now and be phone-less for a month or is it okay to wait until the new phone arrives?

- I'm not too sure if we have any upcoming price changes to the Apple Watch.

- good question! We don't want to leave you without a phone while you're waiting on your new one to arrive. We know backorders happen and sometimes they extend past the 30-day return window; your 30 days won't start until you receive the new phone.

I'm paying the device in full (with a trade-in credit) but the problem with this is on Tuesday Morning (9/17) my bank declined the charge (I assume because it thought it was possibly fraudulent due to the high dollar amount) so I reviewed the transactions on my bank and said it wasn't fraudulent.

The next morning I called Tmobile because I noticed a text requesting I call them to complete the transaction. When I called, the rep asked for the card numbers to reinput it and said it would process within 24 hours and stated that my shipping date would not be affected.

Then 24 hours pass with no charges made, so I call back again and this next rep says everything looks good and I wouldn't be charged until it shipped but then he said I needed to sign the EIP first so he asked for my email address which I provided but then I never received anything. I then realized the EIP is for people financing phones which I am not so this rep obviously either wasn't paying attention or didn't know what he was doing.

It's now Friday, no charges have been made to my card, no shipping label and for whatever reason on the account, it just says "Kept On Hold" which seems concerning. The estimated shipping dates are still the same though (09/21/2019 - 09/24/2019). From my past experiences, I would have been charged by now and a shipping label would of at least been created.

Am I worrying over nothing and just need to wait or is something wrong here?

The EIP request is interesting, but you can take a deep breath because everything should be a-okay with your order.  "Kept On Hold" means that the initial payment didn't go through and the order is waiting for an alternative method to be entered. Once the payment is accepted, the status might not change until the order ships.

I decided to call them today just to verify and this Rep saw the EIP too and thought that was odd but I think they finally got it all fixed so hopefully now my phone will finally process.

As a backup solution I tried contacting like 20 different T-mobile Authorized stores (At least 6 were actual T-Mobile stores) and only one store had the Pro Models but by the time I called they only had an iPhone 11 Pro (I'm looking for the max). All the other stores only received at most the basic iPhone 11!

What's funny is when I spoke to the general stores that sold all carriers, they only had iPhone 11's also but when it came to AT&T and Verizon they had all models still in stock! So basically if I was on one those other carriers I literally could have just walked into one of those stores and bought it without having to go through all this hassle, what a bummer that T-Mobile still doesn't get the same priority when it comes to receiving iPhone inventory.

I completely agree with your frustration. What is the point of preordering if everyone else is getting theirs first? Now, instead of walking into a store and picking one up, I have to wait until mine ships...which they say estimated shipping time is 9/25-10/1.

I can’t even cancel the order, according to the reps in all the t-mobiles I visited. They are telling me since a return of my phone has already been generated, if I cancel, it will screw everything up so I’m basically stuck waiting.

Had I known this, I would have never pre-ordered.

Ordered my 11 pro max green 256gb on 9-16.... yesterday shipping was oct 8-22nd (ridiculous) and now its telling me oct 15-29. You got to be joking. I could of flown to china and built the phone acquiring every part needed befofe that estimated date. More than a month for tmobile pre order.... already regretting switching over from att.

O and to add salt on the wound... i had to argur with tmobile rep to have my $15 360 protection plan removed for my first month. How can you possibly charge me for insurance on a device that you guys have yet to supply me with. The rep removed it for this month but now if i go into a 2nd billing cycle without my iphone i have to waist time with a rep again to have it removed