Joined t-mobile 2 years ago, have an LG V30.  Coverage near my home area (drug stores, supermarkets, restaurants) is awful.   Even a major intersection has 1 bar and dropped calls.   Purchased the V30 due to Band 71.  For two years T-mobile reps have told me over and over again, 600 Mhz is coming.   In October was told on Dec. 6, 2019 your service will improve.  Ha.

Here we are today, nothing, nada.  Using Network Cell Info App I never see Band 71. Driving north and south 50 miles plus.  And signals have not improved, in or outdoors. Only band 2 or 4, once in a while band 12 but that's rare, very rare.  Opened ticket with T-mobile tech support and the latest word is that 600 Mhz is 5G only, LTE isn't running there unless I buy a new phone.   They can take the $1200 for a new phone from someone else besides me and I don't want 6.4" display on the Samsung10+ 5G or One Touch.

Tired of what appear to be made up stories, dare I say lies? Anyone know of any definitive information on Band 71 assignments for non 5G phones, capable and advertised as Band 71 compatible on Tmobile web site?

store rep told you that unless he wanted to sell you a phone.

Store rep not involved.  It was T-mobile tech support in USA via Alabama rep said LTE on 600 Mhz band 71 is not active, only 5G.  Truth or Lie?

Still looking for real data and if anyone in S. Fla can attest to live Band 71?

Maybe ​ can help you.

Because T-Mobile has a 700 MHz license covering all of Florida, deployment of 600 MHz is not a big priority there. AFAICT, T-Mobile is using 5x5 MHz of their 600 MHz license for LTE everywhere they deploy 600. Here is a map of known 600 MHz deployments in S. Fla. 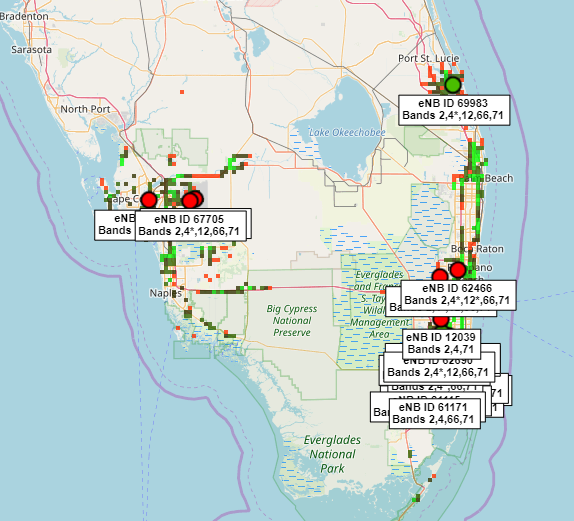 Very helpful.   Demonstrates 600 isn't available where I live so I was lied to at least 3x by Tmobile tech support.  They gave me street addresses to try, where the map shows nothing.   Wasted my time.    So whether its 5G only as they say or LTE is available to LTE only, band 71 phones may nor may not be true.

However I will be in the area where it shows Band 71 fairly dense in the coming weeks.  Lets see if my phone ever goes on Band 71.   Even 1x.

All I can say is that so far, I have not heard of any 5G-only band-71 deployments. They all have LTE.

You band’s are working just fine. (anybody who reads this)

your phone is either ignoring the band and switching to another band or you are not giving it time to do so.

my phone handles 71 just fine, but sometimes it decides to switch to a farther, band….

good luck to who ever reads this :]

Be kind to one another.

Band 71 and N71 are both in use in Blacksburg, VA.  It was one of the early sites for 600MHz LTE and has also been updated to offer 5G in conjunction with LTE over 600MHz.

Syaoran - I am not a T-Mobile Employee but I could use a new job!