Ok, I have a long winded rant here, but, I felt like I needed to tell my story.  So, we recently purchased a home.  Before closing we noticed that our ATT phones, who we have had for several years did not have service there.  So we began checking coverage maps for all of the other companies.  We were excited to see that T-Mobile had excellent coverage at our new place, or at least according to their map they did.  So we went in our local store, the salesman confirmed that we did indeed have service at the new address, so we traded in our ATT phones for new T-Mobile phones.  I see that they had a promo to pay off up to $650 per line to switch, so I thought, what do I have to lose.  We walked out with our new phones and I was $1000 poorer.  (Sales tax and down payment on two phones)  So I paid off the ATT account which was $1600 for cancelling our phone contracts early.  So now I am $2600.00 down and gave up our ATT phones to get T-Mobile to pay off the $1600... When I called to do that I was told that it is actually more beneficial for me to not use the Freedom promo which would have reimbursed me for the switch and leave the buy one get one free I Phone promo that I received in the store, fine print, You cannot combine promotions... and if all that wasn't enough, we went to our new place and have ZERO SERVICE, theres no service miles in any direction from our house! I felt like I just got gut punched!  Of course I called and was told that I was eligible for a free cell spot booster.  After waiting for it and connecting it, it also would not pick up their signal.  So I purchased a whole house We-Boost cell booster from Amazon for $1000.  after connecting it, I was able to get a good Verizon signal but still ZERO T-Mobile signal.  I am on call for my work and this was driving me crazy, if you are keeping track I am $4600 down, and I am stuck into a two year commitment with a company that falsely miss lead me into becoming a customer.  So after finding out that Verizon works, I ported just my line into a new Verizon account.  This new line just added another $150 a month to my bills, but at least now I have a working phone through Verizon who's coverage map stated that they did not have service there.  Isn't that a more honest and ethical way of doing business?  Under Promise and Over Deliver, instead of doing like T-Mobile did?  I'm at a loss, I now understand why I read so many comments about class action lawsuits!

This sounds like it's been pretty rough for you so far, but I do believe our T-Force folks are the best bet to help out from here. You should reach out to them through the Twitter or Facebook links as suggested above. You can find those social links on our Community-2153​ page.

T-Mobile's maps are largely illusory but that's mostly in the "Fair" coverage class. Normally, if the coverage is shown to be "Good" or "Excellent", you actually will have service. I'd be curious to have more information about where this is to compare with 3rd-party coverage maps.

When I look at T-Mobile's coverage map in this area (assuming I have the right spot) I don't see any "Excellent" or even "Good" service. Only "Fair", which as I mentioned, is often highly overstated. "Fair" can mean anything from, OK, to "maybe if you climb a tree." 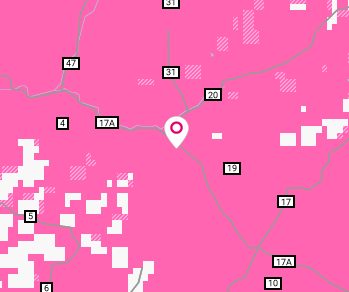 What phones did you buy? Are you familiar with T-Mobile's "Lifetime Coverage Guarantee"? Unfortunately, you traded in your AT&T phones and burned your bridges there, so there's no going back.

Unfortunately, in my case “fair” means zero service Even from my roof.

we purchased two IPhone 11’s and two 11 max phones.   I clicked on the link you provided and I am unable to see if I can convert my phones to the Jump! On demand plans.  and yes, I wish I had never traded my other phones in.

My advice, which you can take with a big grain of salt, is to pay these phones off, get T-Mobile to unlock them, then port your lines to Verizon using these phones. (The A2111 and A2161 should work on Verizon) Unfortunately you didn't really do your due diligence. The carriers all have so many disclaimers on their coverage maps that you could never hold them to anything shown on the maps. ITMT do you have Internet service (Cable or DSL) at home? If you do, WiFi calling can fill in the service near your house. I set up an outdoor WiFi access point at my family's fishing cabin, which sat in a T-Mobile dead spot.  It provided WiFi Calling service for a radius of about 200' around the access point.

Were any of the above suggestions helpful? Let us know!

No unfortunately it hasn’t.  I understand that I didn’t do my due diligence,  I assumed that I could trust the coverage map and I assumed that I could trust the salesman that looked and verified and told me that I could indeed get service at my address. there is no broad band internet here.  I had viasat satellite internet installed but it has a data cap. After the limit is hit it slows to an unusable speed, so that’s not an option.  @tmo_ian is it possible to switch my lines over to the jump! On demand plan?

Yeah. Generally, needing satellite Internet service does not bode well for T-Mobile coverage. Unfortunately, I don't know a lot of the details of various phone purchase plans. I've actually never bought a phone from T-Mobile. I do know that when you take one of those BOGO deals, the discount comes in the form of monthly bill credits, so you have to stay around to get the full benefit of the BOGO deal. The only positive thing I see in your situation is that the iPhones you have should work as well on Verizon as they do on any other carrier. So, you don't necessarily need new phones, if you can pay these phones off and get them unlocked.  How long has it been since you switched your service? If you're within the 14-day buyer's remorse window you could just port out to Verizon and return everything to T-Mobile but you'd lose the value of your trade-in phones (they're gone, never to be seen again). If you do that, you'd have to buy all new phones for Verizon.

Maybe T-Force could help you. They can be found on Twitter or Facebook (strange way to do business).

This sounds like it's been pretty rough for you so far, but I do believe our T-Force folks are the best bet to help out from here. You should reach out to them through the Twitter or Facebook links as suggested above. You can find those social links on our Community-2153​ page.