I have a Samsung Galaxy 7, and for the past month I have been experiencing an issue with a delay in sending text messages and receiving them.  I am using the messaging app which came with the phone, and do not use other messaging apps.  When I attempt to send a message, I will see a spinning circle where the time stamp should be.  After I realized this was happening, I also discovered I was not receiving text messages when others had been sending them.  I have a screenshot to share which demonstrates my issue.  The circle will spin for a long time, and sometimes it will say it failed to send and I will have to attempt to resend, or it will eventually send.  Initially, I attempted to solve the problem by closing all apps, and rebooting the phone.  When this did not solve the issue, I called T-Mobile for assistance.  They had me check the phone setting be sure it was set to the preference to use the cellular network instead of Wi-Fi, and then had me clear the cache & data for the app, as well as sent a refresh signal to my phone.  It worked initially, but two days later I was experiencing the same problem.  T-Mobile suggested I reboot the phone in Safe Mode to check if there was any interference with other apps which may be causing the issue.  This attempt did not solve the problem, and T-Mobile suggested I factory reset my device (and I am still struggling to regain all of my personalized phone settings).  After all of this, I am still experiencing the same problem.  I have just checked the coverage in my area, and where I am the T-Mobile website shows "4G LTE - Excellent Signal."  I do not appear to be experiencing delays with any other functions on the phone.  I have no idea where to go from here.  I would greatly appreciate any help. 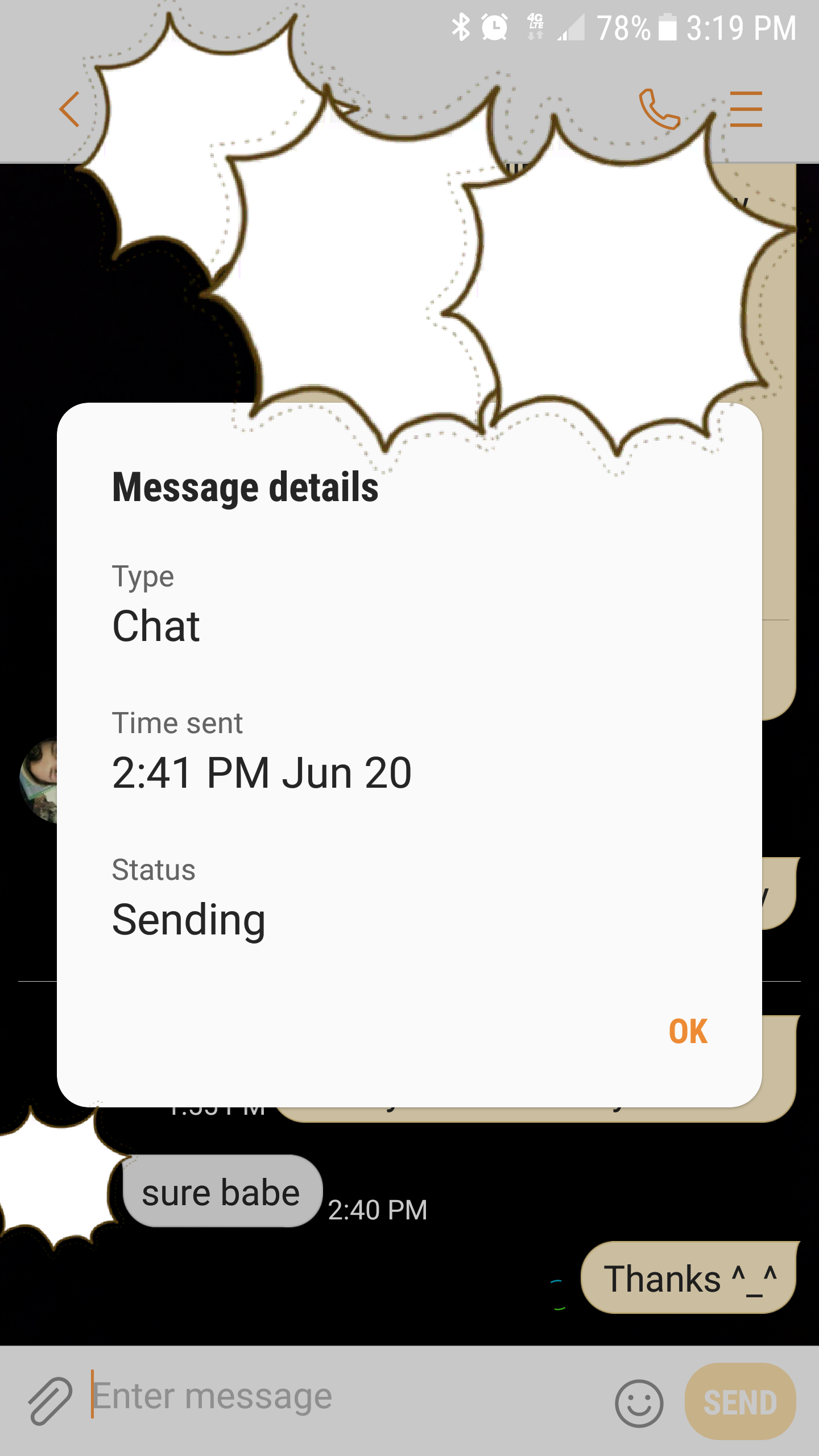 Wow, over 14 years!! That's incredible. I definitely don't want to jeopardize that and I completely understand the need for your outgoing texts to send right away. There are times when I can't physically talk on the phone and rely on text messaging. I'm truly sorry this option isn't as reliable as it used to be. I ran across another thread of users that had S8's and they're having the same exact issue. As I mentioned to them, I'm going to reach out to our Samsung guru to see if they are not only aware of the issue but have any fixes. I know this means waiting a few more days for answers and if I could avoid the wait I would certainly do that. I may not hear back from them until Monday or Tuesday but as soon as I do I'll be sure to follow-up with you. In the meantime, I'm going to send you a private message to get a few details about your device to pass along. You can check your inbox here.

You've provided a lot of detail to what's going on with your phone and sending messages - I really appreciate that as it helps give us a better picture of what's going on. Master resets are never fun but can be necessary at times. I've had to master reset my phone a time or two and I was never a fan of setting up all of my custom settings and downloading apps all over again.

I definitely think this has to do with coverage or is a signal issue. Does this only happen while at home? If so, how far do you have to travel to for the messages to send? Can you provide me with your zip code so I can take a closer look at the towers in the area? Lastly, is there any delay in you receiving texts?

It happens at home (zip 17404) and at work (zip 17402), which are really the only places I frequently use texting. I do not leave either place in hopes the texts will send/arrive, I just wait and see if they will send or not. I also will have a delay in receiving texts, sometimes I don't receive them at all.

Since my original post, I have visited a T-Mobile store and had my SIM card replaced. It has not resolved the issue. I am to expect a replacement Samsung Galaxy S7 to arrive at the store later today as a last attempt to correct the issue.

Additionally, I have left the house since my post and am at a doctor's office (zip 17408). I have tried to send a text message and I am still experiencing the same issue.

Yesterday I picked up a new Samsung Galaxy S7 from the T-Mobile store and everything appeared to be working fine. Now today, I experiencing the same issue as before.

Thank you for the continuous updates. I think it's safe to say that we have eliminated the device as the cause. From looking at the area, York, the coverage seems to be the issue. I checked out the three zip codes you provided along with coverage in the entire city and there are known outages along with modernization going on. This is surely the cause of the delayed texts. As far as the modernization goes, most of the upgrades should be completed within the next 20-30 days. I wish I had better news and a faster fix, but as soon as the outages are restored and tower upgrades are complete, you should be in great shape!

This entire experience is incredibly frustrating. Just last night I did not receive several incoming text messages. And as expected, I had long delays in sending mine - if they sent at all. This has already been an issue for over a month, and now I must wait another month to find out if the work T-Mobile is doing on their network will actually resolve the issue. I have stuck with T-Mobile since 2003, and of course there have been problems here and there. However, we've reached a time where texting is one the top forms of communication. It is most definitely the most frequently used communication on my phone. I pay a lot of money for this service every month, and I certainly don't mind when it works the way it is supposed to. But for two months, or more, I will have to struggle with this and wonder, "What important communications am I missing?" What does T-Mobile plan to do to compensate me for this poor carrier service?

Wow, over 14 years!! That's incredible. I definitely don't want to jeopardize that and I completely understand the need for your outgoing texts to send right away. There are times when I can't physically talk on the phone and rely on text messaging. I'm truly sorry this option isn't as reliable as it used to be. I ran across another thread of users that had S8's and they're having the same exact issue. As I mentioned to them, I'm going to reach out to our Samsung guru to see if they are not only aware of the issue but have any fixes. I know this means waiting a few more days for answers and if I could avoid the wait I would certainly do that. I may not hear back from them until Monday or Tuesday but as soon as I do I'll be sure to follow-up with you. In the meantime, I'm going to send you a private message to get a few details about your device to pass along. You can check your inbox here.

I had the exact same issue on my wife's s8 including a replacement one... the kicker was my s8 worked fine so coverage or tower upgrades were immediately discarded as a reason, I called tech support and they reset her connection to the tmobile network and everything started working perfectly. No factory reset was needed...

Did you ever get this problem resolved? I too have an S7 and experience the same thing. I just got a new SIM but since I do get some texts, I can't really tell if I'm still missing some texts or not.

Any confirmed success stories? I am currently in a text group chat where many of the messages come through on time and others come through days later. I have no issue sending texts, although I am told some take a day or two to get to them, however there is no indication on my end. My data is on, the storage is not full and there is no service issues (zips include 20878 and 20850). I am downloading a new texting app to see if that makes a difference and deleting old texts. If that does not work and no one responds to this I will try the reboot. Thanks community.

I've been dealing with this for 12 months. I've had 3 phones replaced (S7 edges) with no resolution. My wife's iPhone has not had this problem at all.

I don't see any other solution than to leave TMO.

As a previous Verizon Wireless subscriber, I can definitely say this is a T-Mobile issue. I have not experienced any lags in text messaging when I was with Verizon, only with T-Mobile.

TMO send me LTE range extenders for the house which made a difference for a few hours (long enough for me to tell level 3 tech support all is well) but then the phone stopped sending or receiving texts again.  OR SO I THOUGHT.

Out of frustration I switched to an older LG device I had and all the texts have come in since then without delay.  The odd thing is, after I removed my SIM card from the Samsung, the S7 kept "receiving"  messages.  I think the phone actually received the messages but it took up to 10 hours before it "delivered" them to the messaging app.

T-Mobile, you need to address this with Samsung!!!  It's clearly their issue.

I used the same Samsung S7 phone when I was with Verizon Wireless. No delays. I switched over to T-Mobile, and there were always delays in sending text messages, no matter my location.

I currently also have another Samsung S7 Edge as my work phone with AT&T, and there are no delays in sending text messages.

Unfortunately, I have been experiencing this problem, on and off, for a very long time... over 3 devices and several SIM card replacements.  After much trouble shooting around 6 months TMO decided it had to be my handset (an 18 month old S7 Edge), so I bought an expensive S8 Active.  Everything was ok until about 4 weeks ago - same issue started again. Outgoing text messages just spinning and eventually either fail or send much much later. TMO has started all of the troubleshooting again and want me to go to a store to test my SIM. I know where this will lead, no where!  So, after being a TMO customer for 12 years I'm afraid I have no choice but to switch carriers for all 5 of the lines on my account.