I travel all of Florida on business, and find that through many rural areas on major road systems that calls drop and that there is no data. The T-Mobile coverage map reports that the areas have good coverage and LTE data. A few examples include:

2. Florida Turnpike in areas up to and partially including The Villages

3. Route 70 between Sarasota and Okeechobee

Is there an app that I can install to help T-Mobile automatically log these no service areas? Seems like it would be a great way to find and address the poor coverage areas that are inaccurately reported on the coverage maps as good coverage areas. I know the new spectrum will help once the towers are upgraded, but 2 years is a long time to wait for coverage that is less than advertised. BTW, have the S9+, that has the new Band 71 built in.

T-Mobile is not unaware of where they really have and don't have service. There are vast areas of the Panhandle that have no T-Mobile signal. There was region around Marianna where they had the excuse that they couldn't deploy band-12 but that's been cleared and now there are no excuses for not covering the entire state. If they plan to compete against "Dumb & Dumber" they need to provide the coverage.

If you have an Android phone, you could install CellMapper and Sensorly and map the signal in these areas, but that would be mostly for the benefit of other customers. T-Mobile already knows the truth.

That's unfortunate. I see they claim to have implemented band 71 (600 MHz) in about 10 areas in Florida. Will actually have to check and see if it actually does work there.

T-Mobile doesn't need band 71 to provide coverage in Florida. The whole state is covered by band 12 licenses, which provide essentially the same range of coverage as band 71. Besides, I've seen no evidence that T-Mobile has actually deployed any band 71 in Florida. Maybe they have but it has not shown up on CellMapper, yet.

I took a look at the areas you mentioned. Here's what I've notice about them.

1. There's quite a distance between these to locations.There are some spotty areas along this route, but as mentioned above, our engineering teams are aware these locations and we're continuing to make improvements. I wish I had a workaround I can give you, but what I can say is that you should be getting stronger services as you get past the more rural area and get closer to Yeehaw Junction.

2. The Turnpike area shows solid coverage in all directions with LTE towers surrounding a lot of the area. Going further away I'm seeing new LTE sites are coming soon, most likely to close some gaps. The Villages shows it's well covered too. Going east however, the coverage does tapper off a bit. I'm seeing a new LTE site is coming soon there too. I would encourage filing a Service Complaint for any specific address you're going to in these ares. That'll get our engineers to investigate those areas further to see if anythings going on.

3. The coverage between Sarasota and Okeechobee is similar to my response for 1. There's a large distance between these two locations and the coverage will fluctuate as you're passing through. Towns along the route will have stronger coverage but tapper off as you travel in between them. Filing a Service Complaint for specific areas in towns along the route is the best advice I have for coverage here as well.

I know these aren't the most promising answers, but I want to reiterate that our engineering folks do know were our coverage gaps are, and we working to close them. We'll give you the best coverage possible where ever we can, but it's likely you're experience coverage changes traveling over highways and interstates (especially between distances like the areas you've mentioned). I do appreciate you coming here and telling us about your service.

Thanks for the reply. Per my first comment, I expect that the lower frequency bands (new and existing) beings implemented will help dramatically.

I understand. I agree, that will definitely help and we're continuing to close our coverage gaps. Thanks again for the feedback.

I have barely any coverage at my house I can’t explain how many times I’ve contacted tmobile about this in the past. During the hurricanes last year when I lost my wifi I completely lost reception. This is dangerous as we all rely on our cells for news and communications during a storm. I live in Lantana 33462 and they basically refuse to make our coverage better I’ve been with T-Mobile for 19yrs I’ve work for tmobile for over ten years and it seems to only be getting worst of something isn’t done soon me and a lot of my neighbors will be switch to Verizon soon. It suck because I love T-Mobile but they are putting me and my family at risk for not addressing this. I have an iPhone XS Max no reason I’m paying all this money for a phone I can’t use at home. Lastly the worst part is the coverage map says we have the best reception possible.

Here's the problem. When I look at independent (Not T-Mobile) coverage maps they show that everything in Lantana FL is just peachy. 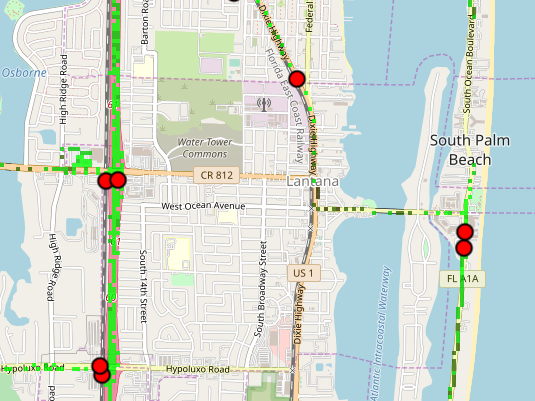 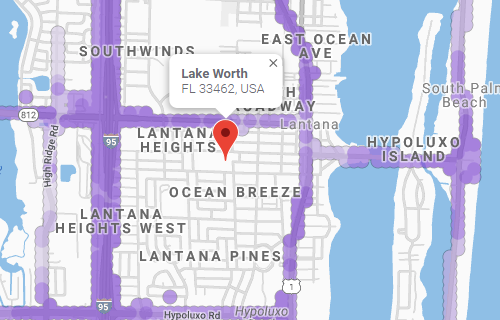 So, on a gross basis, you shouldn't be having a problem. I think the problem you're experiencing may be that all T-Mobile's low-band towers seem to be a few miles located inland. The low-band signals that can get through the walls of your home are coming only from the west. This is a frequent problem with T-Mobile in beachfront areas. The tower is inland and the big reinforced concrete hotel is blocking the signal on the beach.

As for hurricanes and power failures. I kept my landline for 12 years following Hurricane Katrina (2005), mostly because the landline worked after the storm, nobody's cellular did. T-Mobile does not have the best backed-up power supplies and they often rely on less well backed-up backhaul suppliers to save costs. If your cellular connectivity is mission-critical, I'd recommend going with AT&T. Better yet. get an Iridium handset.

In Maryland my tmobile service is good most of the time. In Florida it is horrible. Bad in Brevard County, all around Sarasota, horrible in Palm Beach County, bad in the Homestead area, and spotty around the Ft. Myers area. The internet is full of complaints about Florida coverage. The service does not at all match the coverage map. Is the merger with Sprint going to improve anything? I'm about ready to go back to Verizon where I never had a problem.