Thanks so much for reaching out. Do you have issues with coverage dropping, or is it primarily the speed? Have you ensured you aren't at your max high speed?

I have ensured that I have not reached my max high speed limit because I have unlimited data plus I pay extra for unlimited 4g LTE. I also have bad phone reception in and outside of my house. I've had 2 different phones while at my current address; A note 4 and note 5. My girlfriend also had both of the same phones and has the same connectivity issues. So the phones being outdated isn't an issue. I've power cycled the phone down and up. I've reset my mobile network to default. I've tried downgrading to 3g/2g. I've turned off data roaming. I've run multiple speed tests in different areas of my house. It's frustrating enough that the service doesn't work much at my house. Don't even get me started on all the other places it doesn't work either. The beaches in San Diego(any of them), fashion Valley mall, most of Clairmont mesa just to name a few. Oh and my mobile data didn't work half the time while driving from San Diego to Chicago. We had to pull over when we got signal so that we could screen shot the directions to reference when we would lose signal. No signal meant no use of our app to watch movies, play games, listen to music, etc etc.

Fashion Valley Mall has three T-Mobile sites within 500 m. Signal levels around Clairmont seem to be mixed: some strong areas, some weak. It does not surprise me that you didn't have continuous data service between San Diego and Chicago. Much of the way would be roaming on other carriers, including Commnet and AT&T. You would quickly exceed your roaming data cap in such a situation.

T-Mobile should have 20x20 LTE in San Diego, which is about as good as is possible. They are in the process of adding 700 MHz service in San Diego, which will help fill in a lot of dead spots and improve indoor service. At this time I only know of one 700 MHz site in the area but this is based on crowd-sourced data, so it's not entirely reliable.

Just checking in to see if you still need help with your internet. Have you checked with Tech Support for info about the tickets you filed for any updates on this? Let us know. Thanks.

Yeah the tickets were all closed and that's why there are multiple tickets opened again and again. I just don't have the time to stay on top of answering the same questions and doing all the same troubleshooting procedure on my phone over and over as I usually get a new tech everytime someone replys to my original posts/emails. I guess it's my fault for not setting aside time to figure out the connectivity issues and still keep paying my bill every month.

We understand you're busy, but this isn't your fault. This whole "song and dance" can be tough to keep doing, but we do want to make sure we're thorough and exhaust every possible avenue to help you. Here's what I'm thinking. This could be isolated to the SIM card if the issue is following you in multiple areas beyond 10 miles. Have you changed to a new SIM card to see if the same thing happens? Also, were these tickets just for your home address?

That sucks.  Since you're on a Samsung, try to take a snapshot at some of these areas using LTE Discovery (will show frequency, signal + GPS tag), or Samsung's field test mode (will show if you're using 15x15, or 20x20, etc). 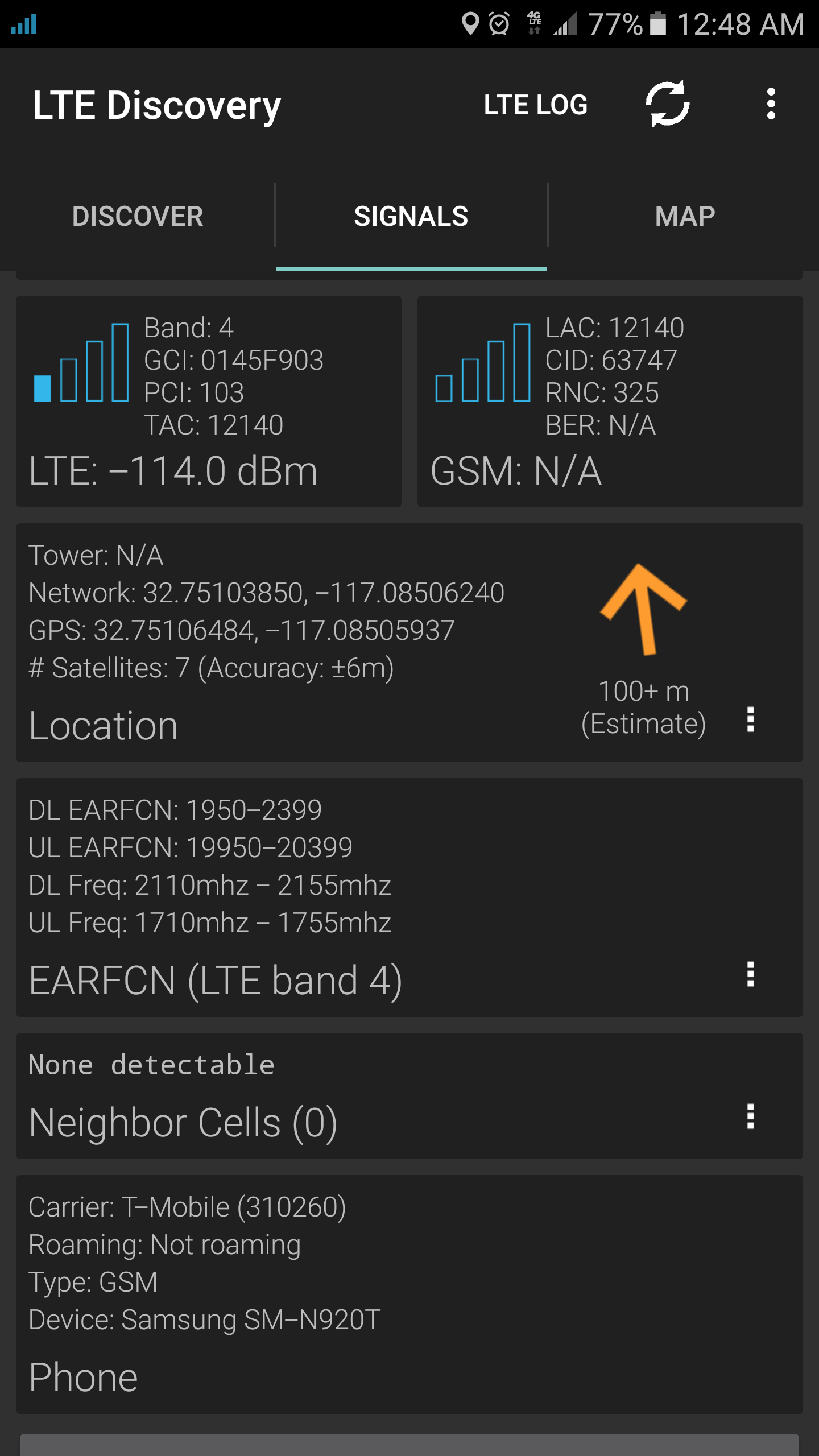 I'm hoping that's 'indoor' service, as its pretty weak.  I typically get ~ -105 to -108dBm indoors but can still get around 20Mbps on band 4 here in Santa Clarita.  That being said, this is suburbia.

As a last ditch effort - try a speed test at an 'early morning' weekend (i.e. before 8am on a Sunday).  This may determine how 'overloaded' it is in San Diego area.

I have a site near me that hits +120Mbps/40Mbps (20x20MHz band 4), BUT on opening weekend of Magic Mountain, I was lucky to hit 2Mbps there, and just about anywhere in town.  Even as I drove up I-5 towards Gorman it was poor towards Pyramid lakes with full service.  Next cell tower and I was hitting +80Mbps.