Just switched from AT&T and my data speeds are significantly lower in my house and my home area with T-Mobile.  With AT&TI was averaging around 50 download speeds. With T-Mobile less than 10.   Same with walking around the area.

If you brought your device, you need to reset the network.

How?  I did reboot the phone.  Apple Xs unlocked.

Just swapped SIM cards.  Shouldn’t have been reset at the store?

I don't fully know with Apple.

My Android required a network reset in order to get the proper speeds.  I'm assuming the same thing is required with Apple?  I really don't know.

Hey there! Any luck resetting your NW settings as suggested?

Yes but that didn't change anything. Still slow inside and outside my home and other areas as well.

The speeds, while not the 50 MBPS are still pretty quick and are actually within the range of our expected speeds Internet Services | T-Mobile’s Broadband Internet Access Services.
Do you notice if the speeds are any quicker during different times?

Just curious if you noticed a speed difference during a different time like Chris asked. Please let us know. Thanks!

No.  For the most part I get speeds less than 5 Mbps.  I am finding that most areas (including my house) I get slower data and even calls tend to either drop or I can't hear the other party or they have trouble hearing me.   I am streaming right now and not only isn't the picture clear, it just froze.

I am very frustrated because I expected better from T-Mobile not worse than AT&T.

I recently moved to Arizona and here is my speed inside my house, I'm trying to figure out that upload speed. Lol 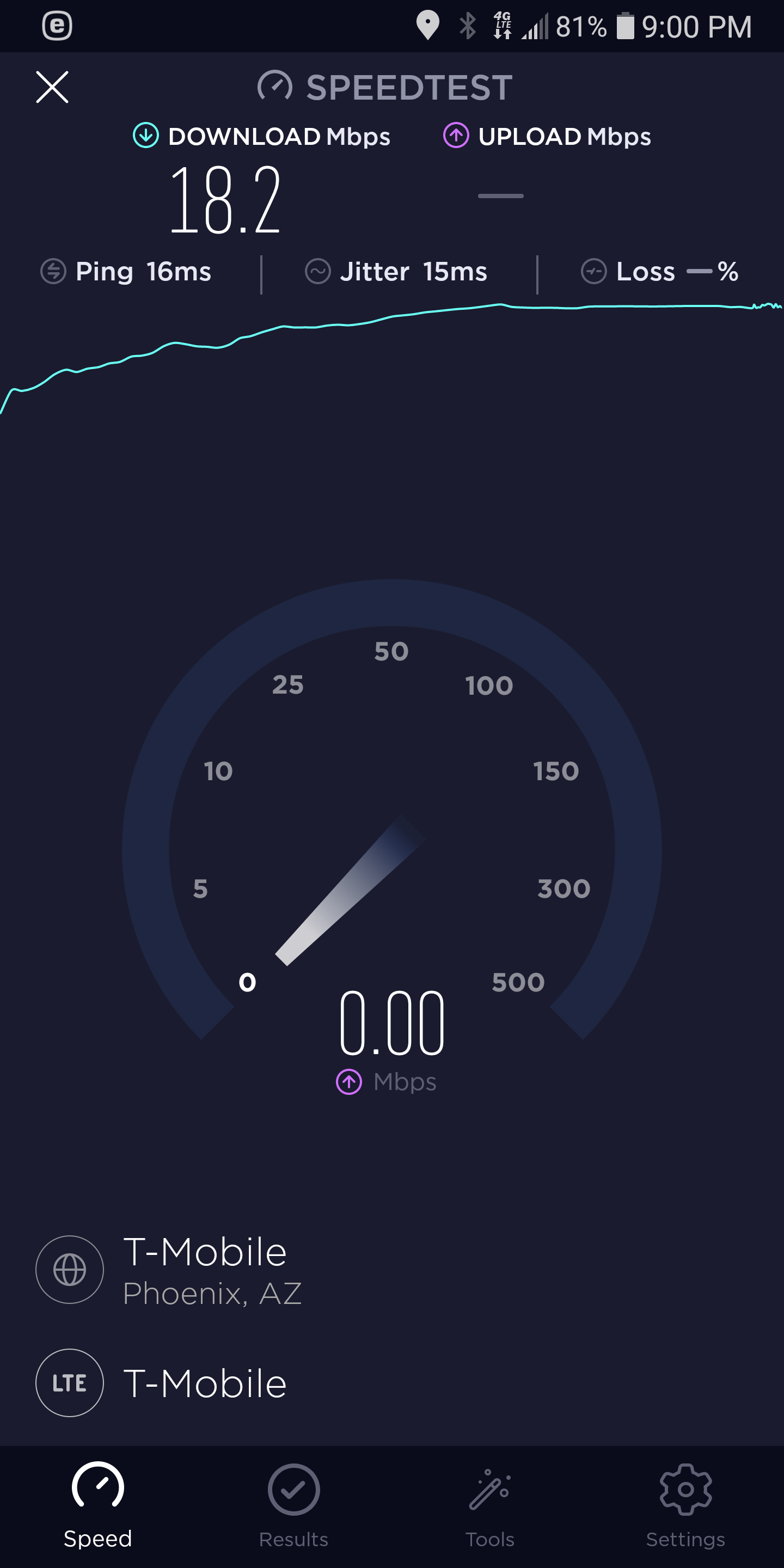 Here's my speed at work 12 miles away. 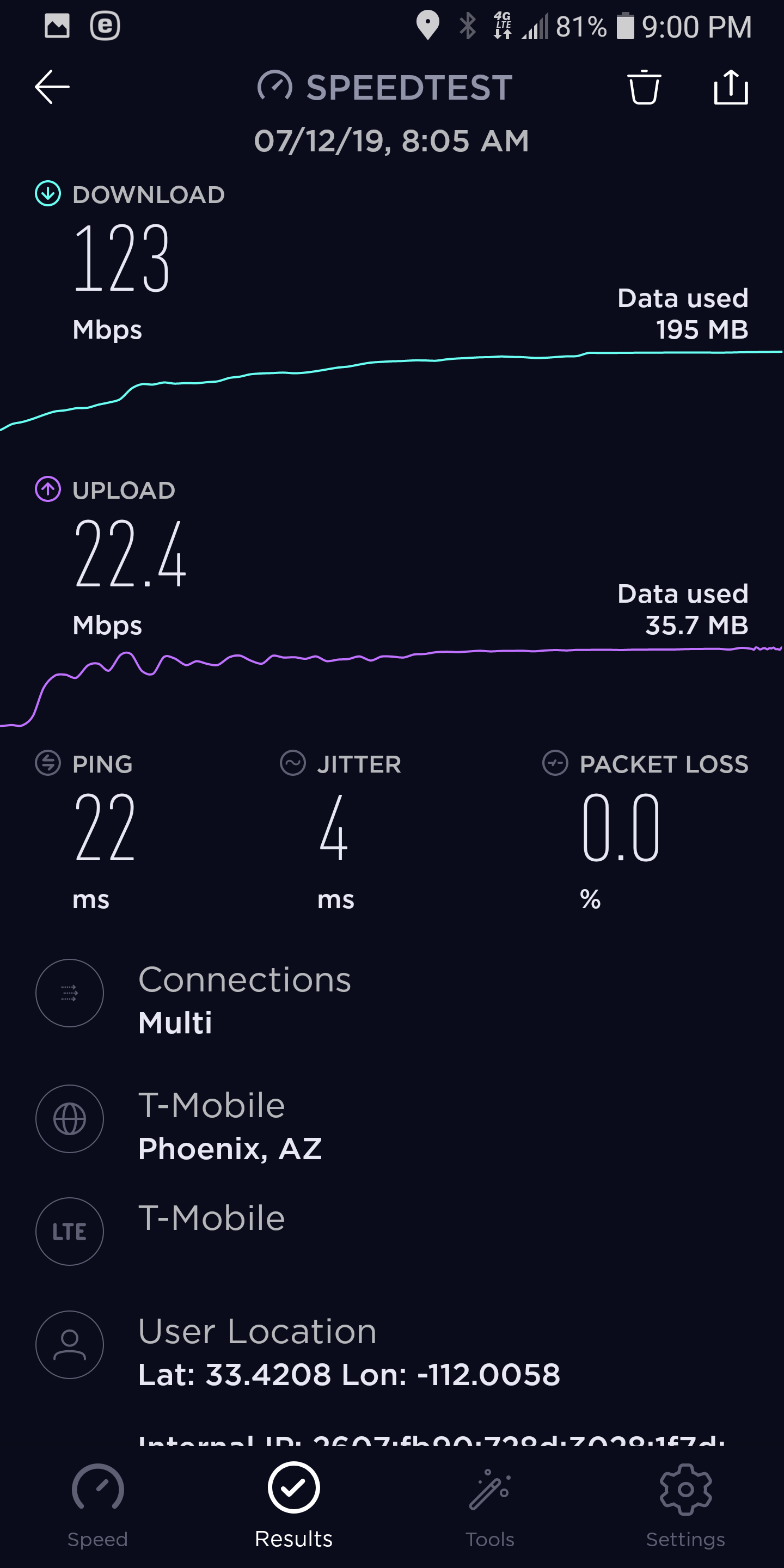 And when I do to downtown Chandler , AZ. outdoors i have full bars and lte but it takes forever to load and according to Tmobile

all the towers in Chandler, Gilbert, Mesa , Tempe and Phoenix have been upgraded, all the cities I'm bordering on.

I'm not complaining because since I got here my bars went from 2-3 to 4-5.

I am in Lake Havasu City, Az

Also just switched from att.  LTE speeds very disappdisappointing on One Plus 7 Pro and LG V40.

With all my complaints about ATT, signal speed was never a issue.

The speeds aren't so slow that we would need to file a service ticket with our engineers but streaming with 9-10 Mb/s should not be freezing. Where are you streaming from specifically? Have you tied streaming from other services like Youtube, Netflix, or Hulu with the same result.
no upload speeds at home 😥, that is no bueno! The test shows no upload speed but if you try to send yourself a MMS, does it come through? I only ask cause I am wondering if the upload is non existent or if it is just too slow for the test to register.

​ - Sorry your speeds are also slow 😥 Do you notice if they get any faster when changing locations like how did?

Have you looked up your coverage in your specific addresses? We'd just like to make sure there's solid coverage where you're using the data. There's a chance we'll need to have a Service Complaint to get this issue resolved.

I've done other tests but the upload is usually between 1-2. It doesn't bother me because I can

I just left Lake Havasu T Mobile store.  They said should have good service where I live.Talked to store Mgr Brian.He said I should definately have you open service Complaint to address this issue

Sent from Yahoo Mail on Android

reply from tmo_mike_c in Network & coverage - View the full discussion

Have you looked up your coverage in your specific addresses? We'd just like to make sure there's solid coverage where you're using the data. There's a chance we'll need to have a Service Complaint to get this issue resolved.

I disagree, speeds are slow.  The original 9 Mbps that I posted is the highest.  I would say that I average in the mid 5 Mbps.  Compare that avg of 5 Mbps to 60 I was getting with AT&T?  I am extremely disappointed that AT&T was in fact faster.

Traveling around S. FL I find many spots where data is just plain slow, apps take forever to load.  Not to mention I have lag issues while on the phone.  Considering that I have the near top of the line iPhone, can't be a phone issues?  I keep wondering what did I get myself into?

If you are getting consistently slow speeds, a service ticket is going to be the best bet. Please do Contact Us when you have a moment so our folks over the phone can get this process started for you.

Damn i would be ecstatic with speeds like that. 😀 I'm getting 0.10Mbps. T-Mobile is garbage. I just switched 5 days ago from Verizon. Big Mistake. I can't open most apps or see who is at my door through RING. T-mobile is cheap for a reason. I can't even load the Tmo app. And I am in a great area here by El Segundo, CA. Plenty of reception. T-mobile excuse, "you're in a busy area" Hm funny I never had that issue with Verizon. Get it together!

Out of curiosity are you using a Verizon phone?  If so it may have something to do with the apn settings.

I called support and he asked me to reset network settings. That's about

it. I still have slow speeds throughout the day. Not sure what's up.

That's as useless as uninstall and reinstall an app or remove cache.   I reset network a couple of times.  Even had the SIM card replaced but still slow data speeds.  The clarity is not good at times.  Looking more and more that T-Mobile is a failed experiment and going back to AT&T.

Ya I may have to switch back. Truth is I left Verizon because I was paying

$320 for 3 lines. But starting to see that it may be worth paying more

wanting to smash my phone. It just took me 18 min to watch a 3 min YouTube

But here is the problem, it is using Sprints towers and service.  Sprint is easily the worst of all the carriers.