I switched from a windows phone to a Sony Xperia z1s because I was receiving weird symbols when people would send me messages. I thought it was the phone, but since i switched from windows to android, I still have the same problem. This used to only occur once in a while, but now it occurs about every 5 to ten messages. I have no idea how to fix this?

Wanted to update since it has been awhile. I haven't experienced the issue lately, nor has my wife both using Note 5s on T-mo. I didn't mention that I had this issue on At&t as well near the end of 2015. That was on the GS6edge+. My wife was getting the issue from multiple recipients, while I was only having the weird symbol issue from one person. I also didn't mention that I came across a thread online that suggested a misconfigured APN (access point name) could be the issue. I did reset it to default, but it didn't solve the issue. Basically, after it happening quite regularly, the problem has since disappeared. God Bless America.

Hm, that's certainly strange it's happening between devices. Does it seem to be any specific characters this happens with?

same issue here. Happened on my GS6Edge+ and also still happens on my Note 5. It also happens on my wife's note 5 and she even gets those weird symbols instead of notification number on the stock sms app! It really sux cuz the text message sent to me is truncated significantly. Like more than 80% of the text message is missing and only a few weird greek numbers are left. It happens to me every week or so, Sometimes more sometimes less. Some other forums say it's an issue between apple mms and verizon/tmobile sms/mms. The example below was sent to me and was missing about 80% of the message. This is the stock sms app on note5 and my settings/language/ is set to english. I don't have any other messaging apps installed except whats app and hangouts (preinstalled). I tried to clear app cache on stock messenger, of course a restart (it's been happening over months). My wife's phone had a partition clear but not mine. 😕 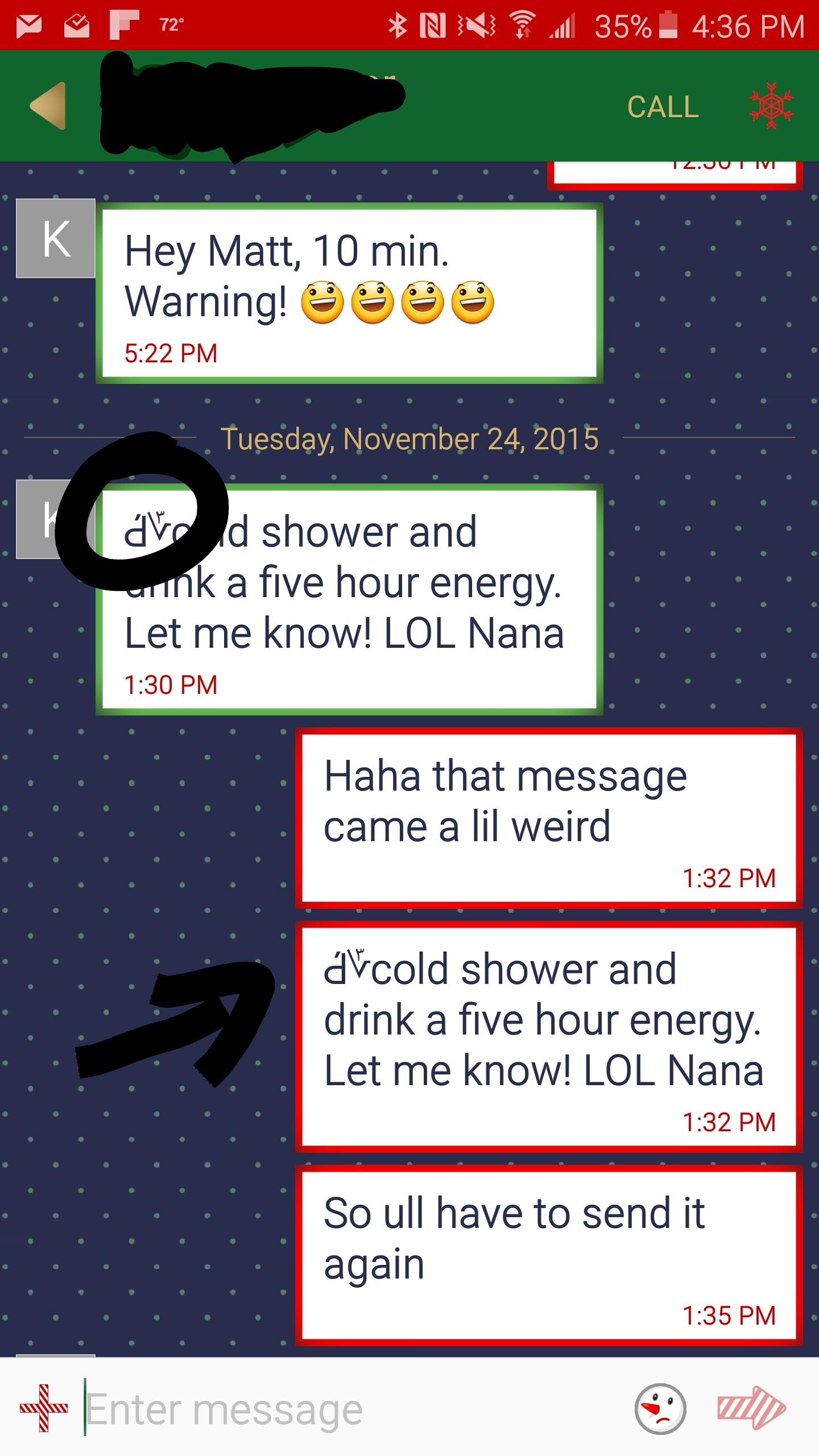 That is so strange! I have never seen that before and haven't been able to find other events of the same.

Do you have a foreign language keyboard installed on the account?

So it was happening on long texts from many different iphone users before, i guess the setting 'automatic' (the 3 choices are gsm alphabet, unicode, automatic) was choosing unicode automatically and limiting sms to 70 characters instead of 160. I think its when iphones send long texts with emoticons. So putting on 'automatic' wasnt fixing the weird symbols. I set it to gsm but nobody will send me a long text to test it : (. Maybe they will later. Thanks for the help

The other things i tried were reset apn settings to default, clear cache on stock messages app, clear data on stock messages app, switch to unicode, switch to automatic, force quit messages app, restart phone after each. I tried each step individually then restarted note5 and waited until i got greek letters again to try another step. Setting it gsm alphabet right now to test. I got this message today on 'automatic' then switched to gsm awaiting results.

any way to remove that pic since the phone number is on it?

I have gone ahead and had the photo removed! 😊

How has the test with the GSM alphabet gone?

thank you! So far nobody has sent me a text more than 60 characters with an emoticon 😥. 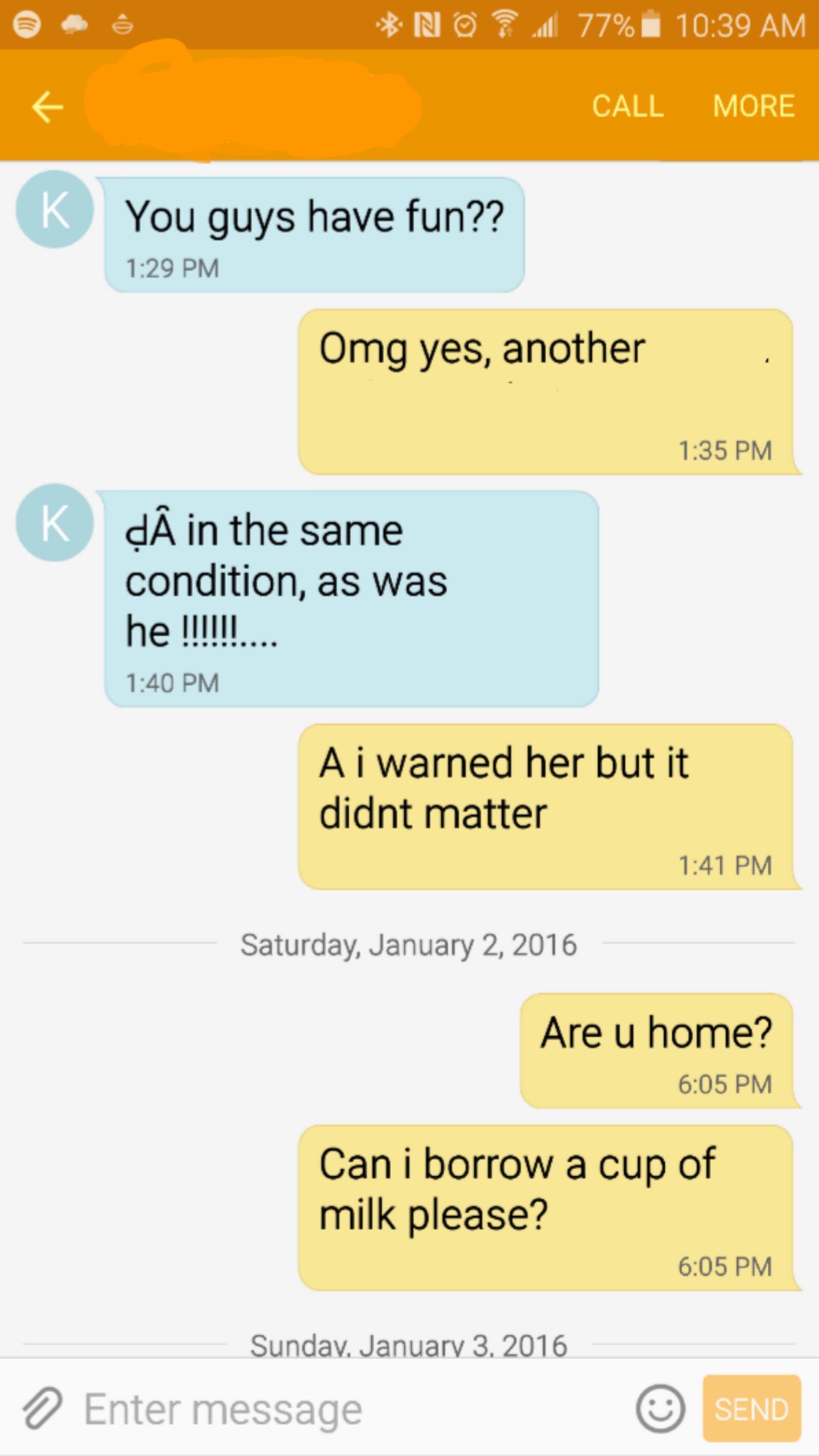 It's happening to me too.  I have a Nexus 5.  And I think the texts are coming from people with iphones.  It's really annoying.  My messages look similar to the ones posted above.

Any more ideas on how to fix it?

Are their messages including some kind of emoji or special characters specific to iPhones? Do you know if they have iMessage enabled or if their texting you without iMessage turned on? I'd like to test these things out to see where this is coming from.

Well i finally got one of the iphones in my hand that I was getting weird symbols from (iphone 5). I only had about 1 minute to try and fix it

. I noticed she had the option to send as sms when mms isn't available, OFF. Perhaps she was in a spotty wifi place and sending mms or trying to dicatate texts. Unfortunately she deletes her text logs regularly so I wasn't able to compare what she sent to me to what I had received. I enabled the send as sms setting as previously mentioned. I didn't check her software version or perform a soft reset. She mentioned weird things happening while dictating texts though, old messages popping up from days before in the middle of a dictation. Based on her previous texts it's likely she included emojis in the truncated messages. Stay tuned lol.

Forgot to mention on the aforementioned iphone 5 60 second diagnosis, did have imessage turned ON in settings.

Thanks so much for the update. You got some good information, even with a 1 minute window to try and fix this. I'm interested in the comparison of what her phone shows in relationship to yours. It really seems like it may be some emoji or character that may not show up correctly on your phone. Software could definitely be the cause of the old messages popping up so making sure the software is up to date, as well as completing a reset are great options to help fix that. I do look forward to hearing more about what you find. Thanks !

Has anyone solved this yet? I'm having this same issue. It seems to just happen from people that have Verizon and an iPhone.

Hey we're still working to narrow this down a bit. Would you be able to take a peek at the other sender's message to see if they are putting emojis or other symbols in their text? We'd just like to see how the message shows up on the original person's phone.

Wanted to update since it has been awhile. I haven't experienced the issue lately, nor has my wife both using Note 5s on T-mo. I didn't mention that I had this issue on At&t as well near the end of 2015. That was on the GS6edge+. My wife was getting the issue from multiple recipients, while I was only having the weird symbol issue from one person. I also didn't mention that I came across a thread online that suggested a misconfigured APN (access point name) could be the issue. I did reset it to default, but it didn't solve the issue. Basically, after it happening quite regularly, the problem has since disappeared. God Bless America.