Typically domestic roaming was only available in areas where T-Mobile didn't have any coverage like say Montana where Commnet has coverage.  So typically T-Mobile would have agreements in place in those specific markets but as T-Mobile has started rolling out Band 12 (low band) in some markets where they didn't previously have coverage they may not need some of these agreements anymore.  Or is could just be Commnet decided to up the rate and T-Mobile is not accepting the new rate but of course Commnet will blame it on T-Mobile similiar to when say a network has contract issue with cable/satellite provider for a specific channel they tell you to call DirectTv or Comcast rather than say we up'd the price and they didn't like it they just blame the other for not agreeing to the new deal.

These are my best guess but you will probably not get the actual answer from either side to be honest.

‌Dear Stevetjr, thank you for your reply. Yes, Commnet covers mostly rural areas however in my case I am concerned about Grand Canyon Village, Arizona. Annual visitation about 5 million !!!  I lost data roaming about 4 months ago. When contacting T-Mobile repeatedly I got no answer to why my data stop working. Trouble ticket also didn't help. After waiting for the new billing cycle and changing the plan as suggested nothing changed. After 3 months I discovered myself what happened. Confirmation what actually happened is on commnetwireles.com website. All other large cell service providers are providing customers with own data or data roaming, I am not sure if I should wait any longer or should I switch my provider.

My phone identified two services there: Verizon and Commnet which specializes in covering rural areas.

Now the only identified carrier there without data is T-Mobile. I travel to the mentioned location regularly as a tour bus driver.

It's not so much area-specific roaming agreements as it is T-Mobile using the roamed carriers' LAC to regulate where you can roam. Commnet is notorious for charging monopolistic roaming rates. What would bother me more than T-Mobile not roaming Comment, is T-Mobile not quickly changing their roaming maps to reflect this. 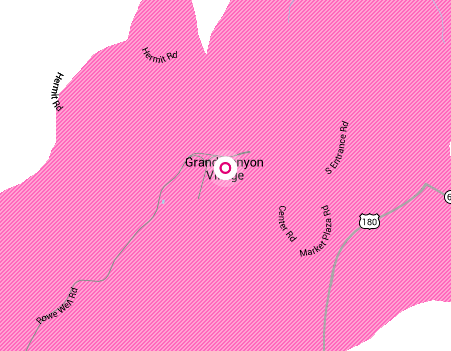 ‌Thank you all for replying. What I'm getting is that when roaming partner is to expensive for T-Mobile existing data roaming service is simply disconnected and customers are not informed nor they can't find any answers from T-Mobile customer service or technical support. Commnet Wireless which only depends on other companies roaming apparently is not to expensive for other carriers otherwise it will be closed. Commnet has no individual cell phone customers and is just existing by providing roaming services to other carriers in generally rural areas. If we add 5 million visitors a year just visiting Grand Canyon and all other rural areas we can see that by disconnecting data roaming services we have significant numbers of T-Mobile customers affected. Naturally maps may not be updated. Who wants to admit shrinking coverage.

At one time Commnet only provided a token prepaid retail service that was so awful that no one would actually use it. The now do provide actual retail service under the Choice‌ brand.

I recall when CSpire (then CellularSouth) provided nationwide roaming on every other analog & TDMA carrier, except Commnet. T-Mobile does have voice and text roaming, it's just the data, as I understand it, that is either nonexistent or unusable.

I personally look forward to more cellular competition in National Parks. The NPS is pretty difficult to deal with and resists any changes. They tend to believe that if their visitors have access to one gas station, one restaurant and one cellular carrier, that should be enough.