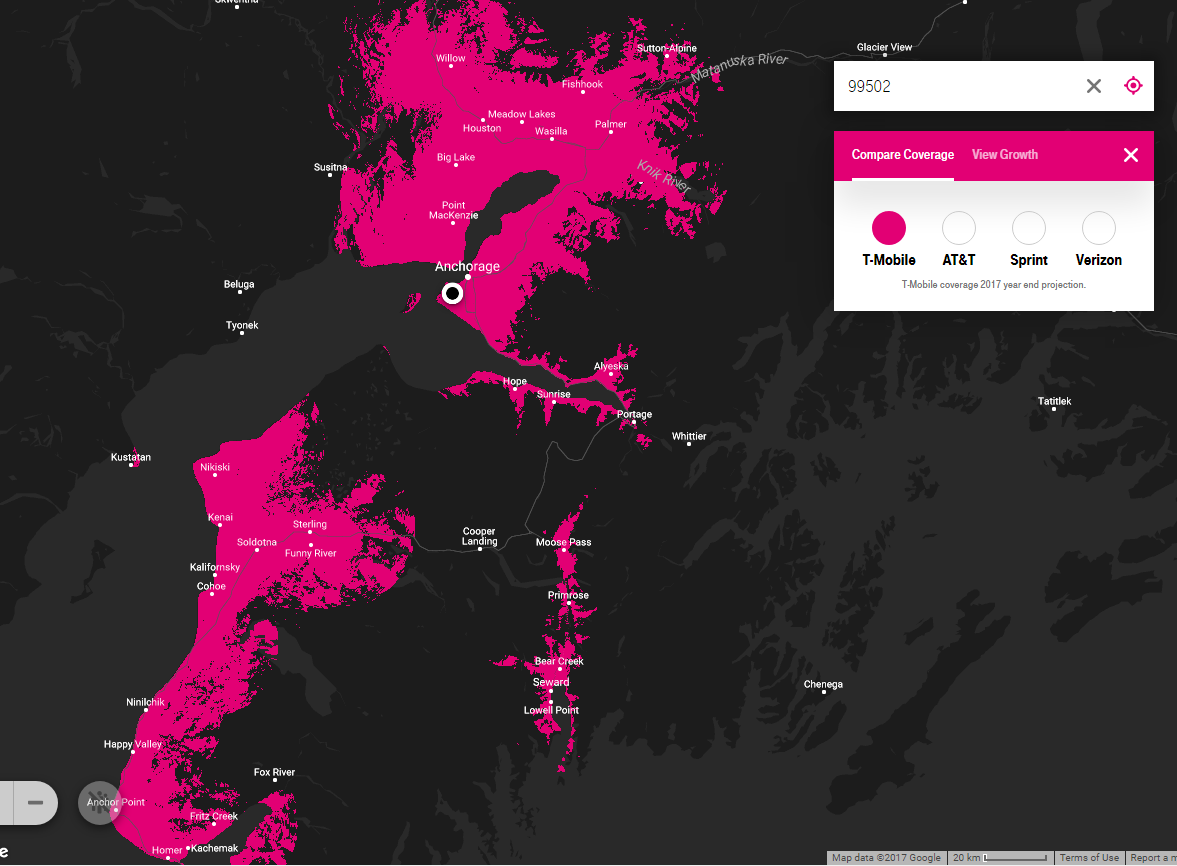 This is the T-mobile claim of coverage. It is inadequately covered using roaming on your phone by At&T officially, but you will find that GCI takes up most of the slack where AT&T won't work (almost everywhere metropolitan). If you get 3G in any location you are doing great. Sometimes I get LTE  but usually E or 3G and one to three bars of connection in ANCHORAGE (the largest city in Alaska)! 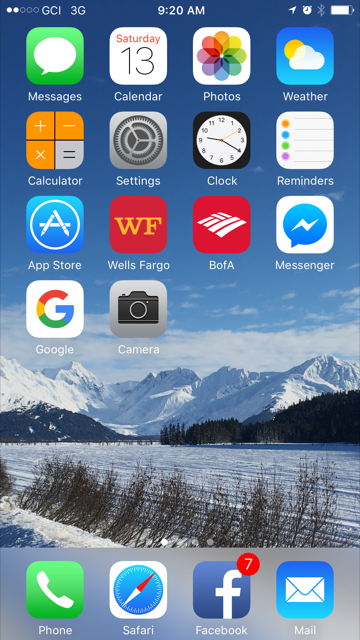 I'm locked in with iPhones that I owe for and five lines (three are family in Oregon where I picked up T-Mobile, (They don't have any T-Mobile stores up in Alaska at all - even though they advertise T-Mobile on the TV all of the time), and two lines here in Alaska for my wife and I. We pay for our phones (about $30 a month), and then the lines and data, so we pay $333 for service monthly (not great for what we get). 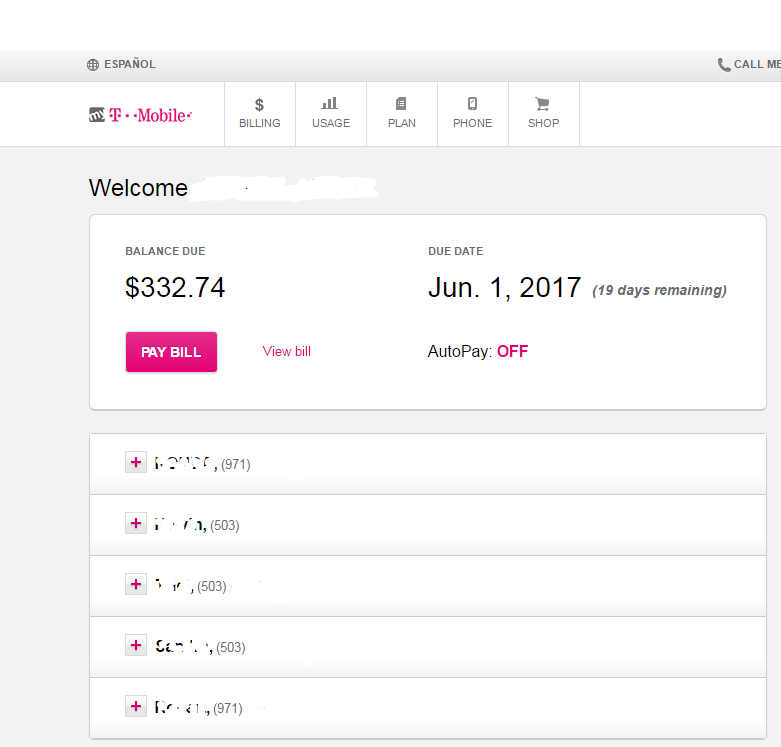 One would have to think TMO plans on deploying 600Mhz in AK otherwise why buy it.  600 is such a low band that it wouldn't require the tower density had they had to go in there with their standard bands 4 or 2.  I suspect one of the other challenges with data especially is not necessarily the tower but the backhaul from the tower especially anywhere outside of Anchorage or Fairbanks.  I suspect this because GCI probably has a very limited backhaul and probably why they don't allow data roaming even 2G/3G because it just can't handle the load and would impact their own customers.

All the major carriers actually roam for a good chunk of their coverage in Alaska. The sad truth is that its just not worth the investment to add serious coverage up there due to harsh conditions and limited population. Its just something you will have to put up with for now until T-mobile gets the funds necessarily to deploy their own native coverage up there. Which will be probably a good year from now at best. T-mobile is going to be revamping their whole network again as soon as they get the rights to deploy the new 600mhz spectrum they acquired and that is when you can expect to see native coverage.

TMobile has decent coverage throughout AK with local partner GCI. You will not get LTE or data coverage in a lot of places but voice works for the most part. Sad truth with AK is it is empty for the most part and GCI takes the advantage of it by being almost the sole player. Without governmental subsidy, I don't think that is going to change.

One would have to think TMO plans on deploying 600Mhz in AK otherwise why buy it.  600 is such a low band that it wouldn't require the tower density had they had to go in there with their standard bands 4 or 2.  I suspect one of the other challenges with data especially is not necessarily the tower but the backhaul from the tower especially anywhere outside of Anchorage or Fairbanks.  I suspect this because GCI probably has a very limited backhaul and probably why they don't allow data roaming even 2G/3G because it just can't handle the load and would impact their own customers.

When I was in AK last summer, I was roaming on GCI network for the entire time, travelling between Seward and Fairbanks. I believe they covered the roadways but left a lot to be desired outside of the Anchorage/Fairbanks and few of the other tourist destinations.

Strangely, or how you put it the "sad truth" is that neither of these

states have to rely on another carrier as they both have T-mobile. Your

My point is not moot since the comparison is not a 1 to 1. You have to remember that the cost associated with building out their network in Alaska is exponentially more expensive then rolling out LTE in a place like Washington due to the fact that Alaska is missing important infrastructure that would be costly to set up due to the frozen nature of the ground and unpredictable whether variables.

It isn't just population, but density that determines if wireless is profitable. Several dozens of towers can cover the entire population of Washington DC with thousand of customers utilizing each tower. It would take hundreds and hundreds to cover Alaska and there would be days (indeed weeks) when some towers wouldn't serve a single customer. You can't make money like that.

currently done). And stores to go along with the advertising that we always

This is incorrect. T-mobile has an agreement with GCI and therefore roams off of GCI. And will always roam off of them before ATT. There have been times were I roamed off ATT in mountain areas. But by fair GCI has the best coverage in Alaska. I had T-mobile when first moving here and switched to ATT thinking it would be better. 6 months later I switched back to T-mobile do to their service being better while roaming off GCI. When you moved to Alaska or visited you should have received an alert saying that you would roam off of GCI due to some sort of agreement they have. Although I first went to Alaska in 2014. And yup there’s no store and all communications with T-mobile will be on the phone, internet or etc.

I recieved 3G and LTE all the time. The only place I rarely get bars is at my job (government building) and at home (military housing). Other than that my service seems a lot better roaming off GCI than having ATT

I would suspect that will all change and probably even start seeing T-Mobile Retail stores once they get their 600Mhz (band 71) spectrum active up there and get native coverage in AK.

Sent from Mail for Windows 10

T-Mobile's LTE comparison map shows it - however, if you read their legal disclaimer - they consider 'roaming partners' as their own - in this case... AT&T.

Hi. Are you roaming the whole time?  Is T-Mobile and GCI letting you use all your data?  I have an S8 that was working great until I did some kind of update and it days I'm roaming when before the update it didn't.   I have 2 other older Samsung phone that is on GCI bit it doesn't says that they're tossing.   Curious see what your phone days.

Are you able to use all your data or are you limited?  I have an S8 which was working great and didn't show that I was roaming but I was stupid and did some kind of software update in Dec. Now my phone says I'm roaming. I would like to know if roaming affect your data use and your mms texts?  Are you able to upload text with pictures and mms?  Thanks.

I’ve had T-Mobile almost three years and have had no problems with them ever regarding cell service of signal . My signal is always good so I have no issues with them. Great service!

In general, T-Mobile prefers to leave rural coverage to roaming partners and concentrate on the cities. This is why much of their coverage is provided by carriers like WCW, Union Wireless, Vaiero, GCI and USCC. The catch is that the partner has to be willing to "play nice", which normally entails reciprocal roaming agreements, reasonable rates, etc.  Some carriers are not interested in "playing nice" and charge exorbitant rates for roaming. In these cases, T-Mobile is forced to overbuild (duplicate) their rural coverage and provide their own.  It turns out that in Wyoming and Michigan there were not any carriers who were willing to be good roaming partners. So, T-Mobile was forced, reluctantly, to provide their own service there. In much of West Texas, Montana and Nebraska, T-Mobile is happy to let partners provide coverage. Places like Washington DC are T-Mobile's core market; where they make their money. A place they have to and want to cover.

For the regional carriers, there's an implied threat: "Play nice or we'll overbuild your coverage and compete you out of business."