I've been having an issue for about a week now where as soon as my phone connects to Wifi, I begin having issues sending and receiving text messages. I've been having the same issue as well as my Girlfriend, her Mom, and her Daughter all having the exact same issues when on WiFi. This includes 4 different phones, 3 different Samsung models and an iPhone. All T-Mobile devices. This issue seems to only be with text messaging. No issues with calls or any type of Data or internet related App. Just sending and receiving text messages.

I called support last week because I was certain this was a known issue for many people, but was told it was not. I went through all the trouble shooting steps with the team and nothing they could do seemed to fix the issue. I cleared my cache, checked my data to ensure it was all setup correctly, I'm even now using a brand new Note 9 and still having the same issues. When I called originally I was using my s7 Edge.

I've taken a few photos where you can see the change.

When you're not on WiFi you can see the 4gLTE symbol next to the service indicator and it seems to work fine.

As soon as I connect to WiFi, that 4gLTE symbol goes away. I'm pretty sure it never did this before.

Then when sending I get these errors..

This seems to be something that change with an update/service. Not the device or anything. When I got my note 9, the 1st thing it had me do was connect  to WiFi and I immediately noticed this same issue (no 4gLTE symbol) before installing a single APP or anything.

I'd like to point out, this is not always an issue. Most time it works pretty well, however it's a daily occurrence for the last week. Happens while I have full cell and 500MB+ WiFi service.

Please advise how this is to be resolved.

Same issue here.  I have an unlocked AT&T phone on T-Mobile. I don't use or have WiFi calling enabled.  I don't seem to have problems sending texts (SMS), but get delayed texts.  If I shut off WiFi, bam! , I get the text.  Does T-Mobile send text over WiFi even if WiFi calling is off?  Could it be I disabled IPv6 on my home internet?  I will try to do more tests.

I am also experiencing this issue intermittently, but recently much worse.

If I turn off wifi, SMS sends just fine. Turn it back on, no SMS will send. Same problem any any wifi network. Home, office, airport, etc.

Long time t mobile consumer here. Never experienced this problem before recently getting a new phone. Texts/pictures would not send (msg. Failed), unless I turned off WiFi.

What seemed to work for me was PERMISSIONS.

Device settings---} App.settings/mngmt.---} find the app you use for texting---} Permissions---} give it all the permissions. Save settings. Restart device. Hope that helps someone

I've been having a lot of trouble with this at work.  In my office I don't get a good cellular reception but my phone is connected to WiFi.  However, I consistently have the problem where SMS won't send (thru Messages).  Sometimes they are just really slow and they eventually go thru, though on occasion they get dropped completely (especially pictures).  Sometimes turning WiFi on and off helps push them thru, sometimes it doesn't.  However, I might have finally found the fix.  I switched the WiFi calling preference from mobile network to WiFi.  After doing this, when I send an SMS it consistently sends within 1-2 seconds.  Prior to the change, they would be in the "sending" state for 5-10 seconds minimum or 30+ minutes in the worst case when they just weren't getting thru.   And for reference I have a Pixel 3.

To clarify, I've always had WiFi calling enabled.  The change today was to select which network it attempts to use first, WiFi vs. mobile.

I tried just about all of the suggestions with not luck. Weird combinations of issues. Could send text over wifi to some iphones not others; could never send text or pictures over wifi to ANY android phone; etc. Finally just reset my network settings and so far so good. I wonder of network setting accumulate changes over months or years and gets confused. Anyway... will let you know if it sticks.

I was able to solve a similar issue. While connected to WiFi, and good 4G LTE  signal, and receiving the error message "cellular network not available. Connect to WiFi for messaging?" while attempting to send texted and all other internet functionality seemed to be working. And yes. There was a question mark at the end, even though that's not a question. Pet peeve of mine.

I'vead the same phone for years, and I've been a T-Mobile customer for almost a decade. Never had this problem, and not sure why someone would leave a great network for such a minor issue. That's like leaving Ford because your car didn't start one day. Anyway, I had called T-Mobile support for an unrelated and during that process they had me reset my network settings. That's when it started happening. I came across this thread and hopefully this helps some folks... 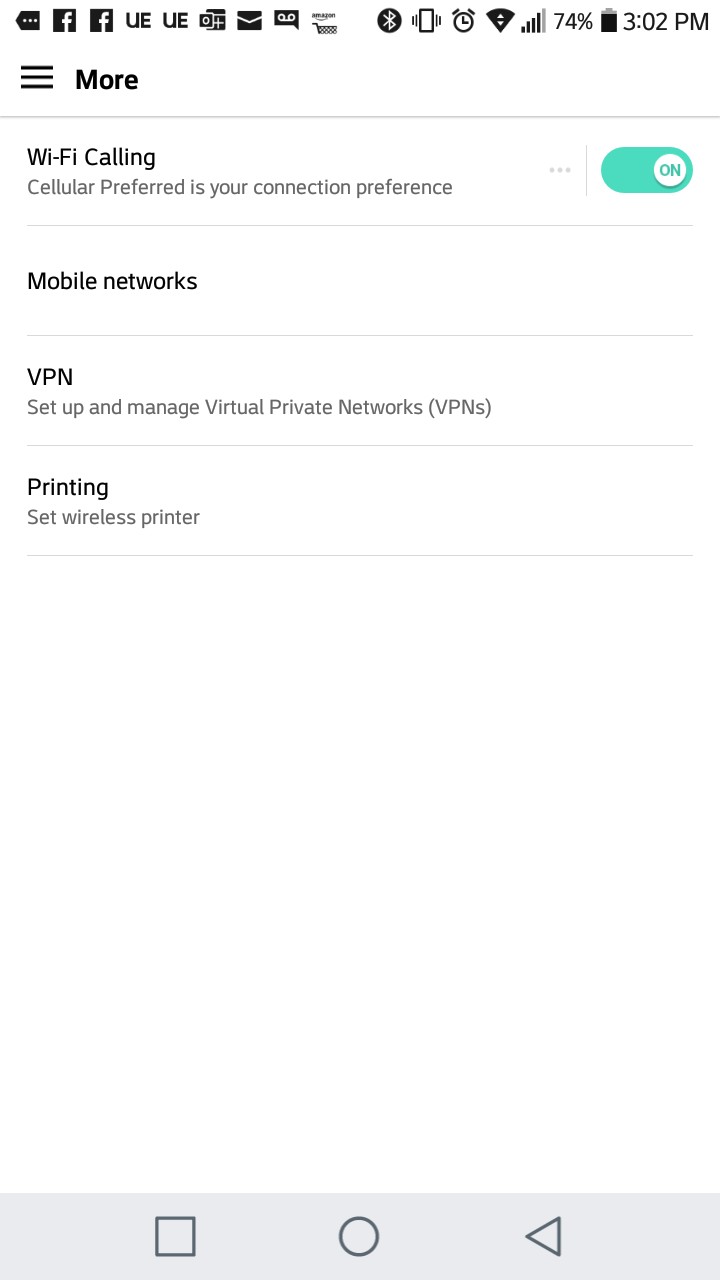 I have been having issues for a while. I just assumed it was my phone. (not a normal one) interesting to see its not just me. Phone calls and texts both only seem to really come in when I am not on wifi. In order to sign in, I had to take wifi off to get my two-factor authentication to get the text. I can call out no problem, texting out sometimes does not seem to be an issue. It's also not EVERY text. it's strange.

So I’m having the same issue but it definitely only started once my phone, (not iCloud), storage became nearly full.  Memory is just about used up and now my texts won’t send on WiFi as well as browsers are slow and not loading/ all apps crashing… Ive has to delete and offload all apps…I def need an upgrade With more storage than 64.

If anyone has enabled power/battery saver, the app/setting often saves battery by disconnecting from wifi while it’s not in use. This can cause a problem if you send a text message before it can reconnect. I always set the battery saver and then choose to NOT disconnect from wifi (i.e. Custom setting), thereby, solving the problem I once had.

We're have the same issue

My partner and I ported our phones from Verizon in November. We both purchased new devices when we ported over- iPhone for me, android for him. We never had any issues with our old service and our old phones. Since porting, neither one of us has consistently received text messages. We’ve called and had trouble tickets opened and no one has called us back. The only troubleshooting attempted was to just never have WiFi on on our phones (seriously?). T-Mobile, we’ve been your customers for 6 weeks- your service problems have apparently been going on for years and your support is nonexistent!

Problem still not solved. I was a happy Sprint customer of over 15 years, got the T-mobile sim card and been unhappy ever since. This needs to get fixed !  People if your thinking about T-mobile DONT DO IT. I will be looking to change providers shortly.  I have 3 phones in my family 2 x s20g5’s and I-phone 12 plus. All 3 have issues and do not like the t-mo network.  :(  cold hard truth, and customer service force me to give this company a “0”  on the 10 scale !

My wife and I are experiencing the same problem. We can receive SMS messages, but when we try to send SMS messages it fails.

We live in an area with spotty cell coverage, so we rely on WIFI calling (which works fine for voice).

I would say that this issue has not been resolved!

Also have this issue. Need to get off wifi and get into cell coverage for texts to work. Tried creating a new APN with prescribed settings, tried most of the content from this thread. No success as of yet. Pixel 4.

I also developed the same issue recently. I recently purchased an unlocked Pixel 6 and transferred my SIM card between devices. I live in an area with no cell coverage and every time someone attempts to send me an MMS message, I cannot download the message until I either restart my phone (only works sometimes) or drive to an area with cell coverage.

I'm having the issue as well. Tech said account was set up correctly.

I’ve been having the same problem for about 3 weeks. (As well as poor call quality. My call quality has been good for years)

Tech support said it may be my old SIM card. They sent me a new one but texting on Wifi is still not working. My wife’s phone can text over wifi.

Today I found a setting CONNECTIONS > DATA USAGE > MOBILE DATA ONLY APPS that I hadn’t previously seen (or been directed to by any tech support). This is described as “Sets apps to always use mobile data, even when your phone is connected to Wi-Fi”. I selected it, scrolled down to and selected Messenger. All SMS messages - text and pics - have been coming thorough in real time, even as my phone’s wi-fi is turned on. It’s only been a few hours, but that’s longer than any other “fix” I’ve tried.

And yes, this seems like an obvious solution; like I should have known to do this. But in all my years of owning a smart phone I’ve never had to change such a setting. And if it’s so obviously easy, why wouldn’t TM or Samsung have suggested it?

I suspect that every 24 hours you’re allowed a certain number of SMS over WIFI. I suspect that after that’s exceeded, you’ll have to wait until the next day and you’ll see that magically you can text again.

Let’s just say I have a strong suspicion that the carrier makes money with each text over cellular and makes nothing over WIFI.

Hypothetically were this true, the APN settings point to servers where these limits would be enforced.